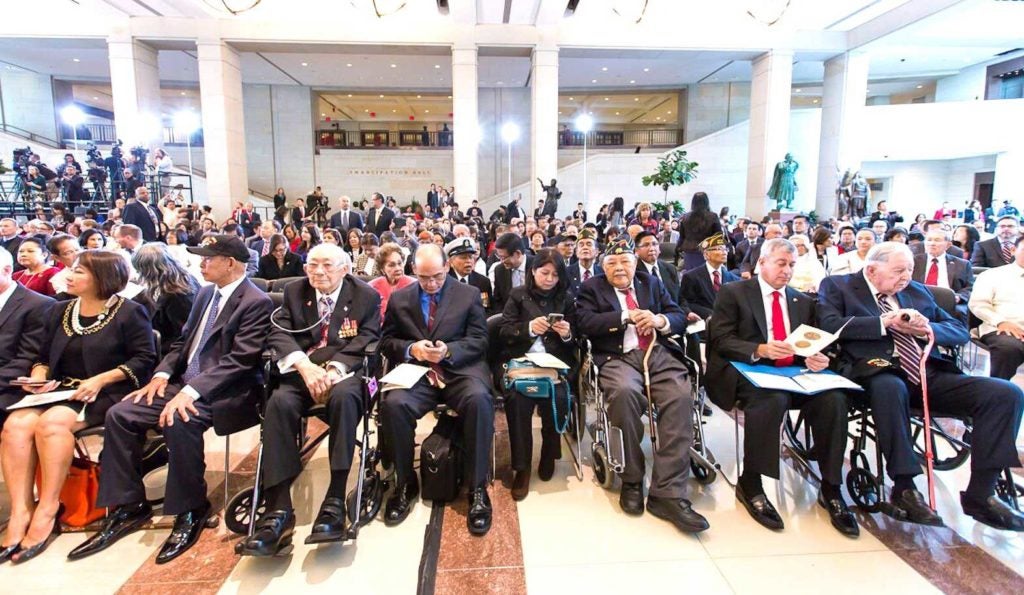 Filipino World War II veterans are honored with the Congressional Gold Medal on October 24, 2017 – a recognition by the U.S. Congress of their service and sacrifice. LES TALUSAN

Our country is in a period of persistent turmoil. With the coronavirus pandemic, over 204,000 citizens dead from Covid-19, and millions of Americans unemployed in a bleak economy. While a highly contested presidential election looms in our thoughts, while there are protests both peaceful and violent in several states, and while we share a sense of desperation and unpredictability, there is still time to pause and celebrate Filipino American History Month in October 2020.

We are provided with the opportunity to celebrate Filipino American History Month in Oct 2020. This privilege did not come without huge challenges of discrimination, prejudice, social injustice; but it is replete with achievements and selfless service in contributing to the prominence, power, and influence of this country. We are very much a part of American heritage and have been so since the American colonial period in 1898 in the Philippines.

We cannot take for granted that the United States is still the most revered country in the world despite its flaws. Filipinos and Filipino Americans still thrive to better their lives in this country. The younger generations are becoming progressive and are striving for excellence in their professional aspirations and representation.

This year we celebrate the 3rd anniversary of the Filipino Veterans Congressional Gold Medal presentation in Oct 2017. It is also the 76th anniversary of the Liberation of the Philippines in World War II, and the 75th anniversary of the Victory over Japan, which ended the war in the Pacific on September 2, 1945. That period is a testament to the resilience and perseverance of our people. It is also the historical period that gave rise to the recognition of and respect for the ordeals and sacrifices of Filipino and Filipino American soldiers and guerrillas.  It is why we must nurture and contribute toward our representation with leaders of character, strive for success in our careers and vocations, and be vocal in expressing our views as proud American citizens.

October 2020 is our time to reflect about the past – on the sacrifices and achievements of our grandparents, fathers and mothers, and the Filipino veterans of WWII who defended our freedom and secured our lives today. Let us also be introspective, with a vision of shaping our future, to focus on priorities that matter most – immigration, health care, representation in American society, education, and nurturing future leaders in order to preserve our way of life and presence in this country.

Finally, we must exercise our duty as American citizens to vote with our heart and conscience for the best candidate, who we can trust and rely on as President of the United States. We can no longer be the silent minority. We must be a vocal minority with a major stake in maintaining and sustaining what our people and community have achieved since coming to America. We owe this much to our children and grandchildren. VOTE!