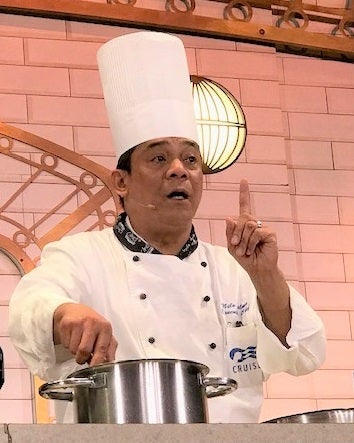 NEW YORK — On most ship cruises around the globe, Filipinos almost always constitute a sizeable portion — around 30%-50% — of the cabin crew. They can be the cooks, waiters, customer service representatives, engineers, janitors and onboard doctors and masseuses. The fact that Filipinos are English-speaking, industrious and adaptable to any regional culture is surely an asset.

I have met quite a few Filipino crew members in my past cruise voyages through Mediterranean and Scandinavia and the Mexican Riviera. But it was in my last cruise adventure from Australia to New Zealand that I finally got to personally interview the Filipino executive chef of a cruise liner: Nilo Palma of the Princess Majestic ship.

Chef Nilo gave a morning demonstration of his gourmet cooking inside a large auditorium, animatedly describing the techniques and ingredients in cooking some of the most delectable items on the cruise restaurant menus, such as his all-time favorite the Fettuccine Alfredo and the Linguine in Pesto Sauce. He wore a towering chef’s hat and distinguished white kitchen robe.

As the demonstration ended and we got to tour the Majestic’s main kitchen, I got to personally meet Chef Nilo himself, who graciously granted me an interview about his culinary career.

A native of Manila and the youngest of seven children, Chef Nilo is currently on his 10th year serving as an executive chef with Princess Cruises. At a young age, he took a keen interest in the culinary arts, and with some prompting and encouragement from his brother, he discovered within himself an innate love and talent for cooking. He attended Saint Louis University in Baguio City where for two years he took up engineering. After completing his studies at Saint Louis, his brother helped immerse him in the art of cooking. His career as a chef began in earnest in 1987. 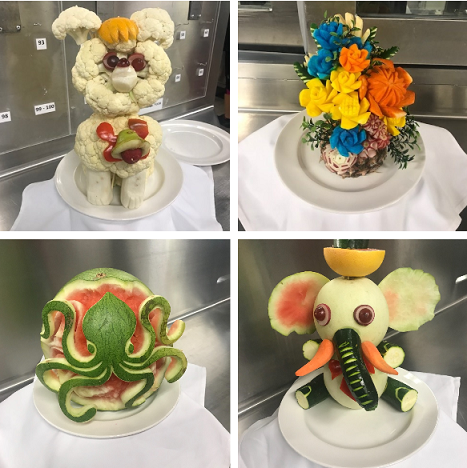 Chef Nilo took up an apprenticeship at the Nikko Hotel in the Philippines, and then began sharing his culinary talents in public establishments in Saipan, Micronesia, Japan and the U.S. before joining his first cruise ship in 1993. In subsequent years, he would serve as a chef for Star Cruises in Asia and Norwegian Cruise lines touring different exotic locations around the world.

In preparing his many dishes, he explained one unique aspect of his cooking style: He sticks to the “classic” taste of food, as opposed to “fusion” style borrowing from different cultural influences. This is his guiding principle when preparing pasta sauces.

“Any food needs a good sauce,” he said. “The sauce complements the dish!”

He is among roughly 550 Filipino crew members of a total of 1,340 officers and staff currently employed at the Princess Majestic. The tasks of the Pinoy ship staff are diverse, from room service to boutique cashiers. He estimated the number of Filipinos working as crew members in all Princess Cruises passenger ships as between 8,000 and 10,000.

Chef Nilo’s wife, a nurse, resides in Manila, while their son is living and working in Singapore. They are both blessed with a grandson who is living with their daughter-in-law in Manila.

While he enjoys cruise travel in any part of the world, in particular he has a fondness for Asian destinations, particularly mainland China. Like most Filipinos, he is a staunch basketball fan and collects team jerseys.

Throughout his nearly 26-year career as a cruise cook, Chef Nilo has taken pride in extending his culinary knowledge and expertise to young folk who aspire to become professional chefs.