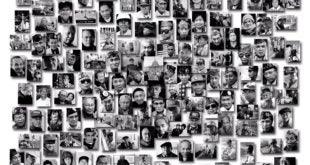 WASHINGTON, D.C.– Advocates and community supporters marking Veterans Day, Nov.11, also celebrated the one-year anniversary of the Congressional Gold Medal awarded to Filipino World War II Veterans on Oct. 25 last year and vowed to step up efforts to ensure “that this American story of service and sacrifice is enshrined in American history.”

“Although it took more than 75 years for that epic day to come, it is nonetheless a time we will long remember, because the 260,000 men and women who fought under the American flag were stripped of their status and denied their rights. Because they were almost forgotten, their pain still lingers to this day,” says Maj. Gen. Antonio Taguba (Ret.), Chairman of the Filipino Veterans Recognition and Education Project (FilVetREP).

Securing their recognition is just phase one of our mission, adds Taguba. “We must now tell their story of valor and duty to country, to remind this generation and generations to come that they are the beneficiaries of heroic acts and selfless sacrifice by brave soldiers determined to defend freedom at all costs.”

In the months following the formal presentation of the Congressional Gold Medal by Congress, more than 50 award ceremonies, conducted with military honors, have taken place in towns and cities across the United States. On average, one event was held per week over the past year, including two that were held in the Philippines. 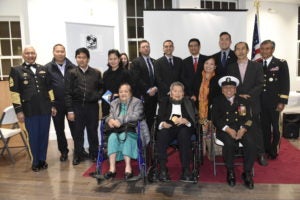 More than 1,200 bronze replicas have been awarded to living veterans and families of soldiers who were too frail to attend or who had passed away. Thousands have died since 1946. There are but a few of the living World War II veterans remaining today. The solemn ceremonies demonstrated the nation’s deepest appreciation and debt of gratitude for their incredible sacrifice.

Attending the event, which was held at the Philippine Embassy’s Consular Annex Building, were community leaders, diplomatic officials, families of veterans and representatives from the D.C. Mayor’s Office.

“Your fathers and grandfathers left a priceless legacy that we can never hope to repay, but one that we vow to always preserve and cherish. But more than that, they also personify the close people-to-people ties that bound the Philippines and the United States for the last 70 years, and will continue to do so in the coming decades,” Philippine Embassy Deputy Chief of Mission Patrick A. Chuasoto said in his remarks.

David Do, director of the Mayor’s Office of Asian and Pacific Islander Affairs and Ely Ross, Director of the Mayor’s Office of Veterans Affairs, each delivered brief remarks on behalf of DC Mayor Muriel Bowser. They also presented a Proclamation from the Mayor, which commended the bravery and “outstanding contributions” of Filipino and American soldiers who “were crucial to both the United States and the Philippines.”

Noting that “there are many others out there who are not able to attend ceremonies like this,” Taguba vowed that “we are going to continue to exhaust ourselves and run across the country to award the medals to living Filipino and American World War II veterans or to their next-of-kin. It is our mission – this is a we mission – for us to honor them.”

Awards ceremony in the Philippines

The Philippine Military Academy (PMA) in Baguio was the scene of the second awarding in the Philippines of the Congressional Gold Medal to Filipino veterans and their surviving families on September 13. The first ceremony was held earlier in the year at the US Embassy in Manila.

There were 31 awardees, four of whom were given posthumously to family members.  The 27 survivors were all from the Cordillera region of the Philippines, many of them Igorot who fiercely defended their tribal homeland from the Japanese.  In front of the entire PMA corps of over 1,000 cadets and several hundred family and friends of the veterans, US Ambassador to the Philippines, Sung Kim, presented the awards.

The eldest awardee was Cato Dampas Pulac from La Trinidad in Benguet province.  He is 100 years old.  When his award was presented, and his age made known, the audience erupted in a rousing cheer.  It was one of many such cheers.  There were several aged 97 years.  When they stood proudly and gave a heart rendering salute, it was hard to find an audience member who did not feel their chests swell with pride.

Adelaida Lim received a medal on behalf of her grandfather, the Filipino military icon General Vicente Lim, the first graduate of West Point (Class of 1914).  General Lim was executed by the Japanese when he refused to cooperate with them.   Also awarded was Colonel Pastor Martelino, West Point graduate in 1920, who also was killed by the Japanese.  Before the war, he was the first Superintendent of the PMA.  His son accepted his medal.

“We are forever grateful for their sacrifice, and we stand proud as protector of their legacies,” Ambassador Kim said. “Their bravery, heroism, and dedication played an integral role in leading the Allied Powers to victory.” 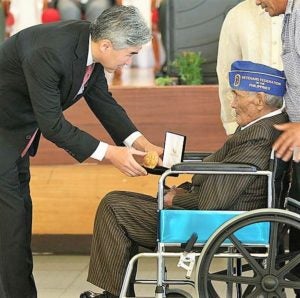 Also speaking at the ceremony was Sonny Busa, Visiting Professor at PMA for International Relations and Military Strategy.  In his remarks to the cadets he told them that unless they “rise to the level of the veterans, you have not done your duty.  The medal is a reminder that history must not be forgotten but passed to the next generation.  You are here, because they were there.”

FilVetREP is now in the second phase of its mission:  to educate the public and raise national awareness of the outstanding accomplishments of the Filipino and American Soldiers who achieved victory over the Japanese Imperial forces in defense of the United States in World War II.

The current plan is to display the Congressional Gold Medal at the Smithsonian Institution’s National Museum of American History (NMAH), replete with a digital exhibit of historical artifacts and memorabilia.

Enhancing this exhibit will be anational web-based, digital interactive educational program, accessible to students in elementary, secondary, to higher education levels, academic professionals, and the general public. Also envisioned is a traveling exhibition in select cities featuring the Congressional Gold Medal and its historic and educational significance in U.S. history and culture.

“We want this American story to be used for educational purposes, and accessible nationwide to students and scholars,” says FilVetREP Vice Chair Marie Blanco. “It will be readily available online for research, references, presentations, and viewing at the Smithsonian Institution, select museums and research facilities, and educational institutions.”

Added Blanco: “As we honor our heroes on Veterans Day, I call on our sponsors, supporters and community leaders to help us make this digital museum a reality. Your generous donations will ensure that this American story will be preserved for posterity.”