A salute to Filipino WWII guerillas

A salute to Filipino WWII guerillas 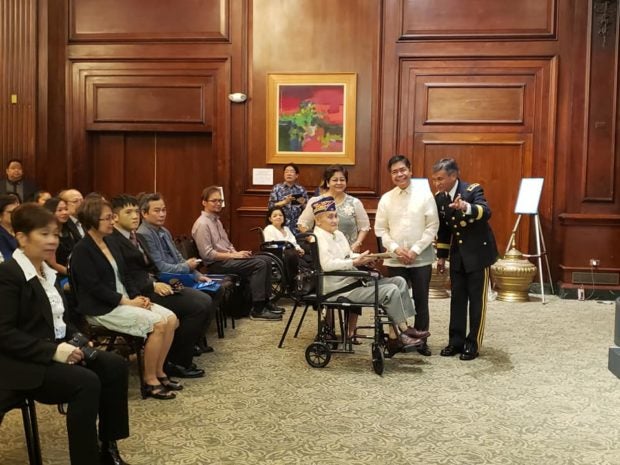 NEW YORK — The year was 1941, the world was shaken by a surprise attack by the Imperial Japanese Navy Air Service against the U.S. naval base at Pearl Harbor, Hawaii. That precipitated the declaration of war by the United Sates against Japan. World War II, from 1939 to 1945, was history’s most lethal human conflict.

After the bombing of Pearl Harbor on December 7, 1941, little was it known that Japanese forces would move on to the Philippines within hours. President Franklin D. Roosevelt called to duty Filipino soldiers and civilians of the Philippine Commonwealth with a promise of full military benefits and citizenship to those who would serve the United States flag.

About 260,000 Filipino men and women loyal to the United States and the Philippine Commonwealth came forward to resist Japan but were defeated along with the American troops. They suffered unspeakable brutality and walked side by side with American soldiers during the infamous Bataan Death March.

Guerilla units were organized all over the country in a resistance movement against the Imperial Japanese forces. These units included militant students and civilians who organized underground networks in strategic regions to fight for their freedom and defend the homeland. 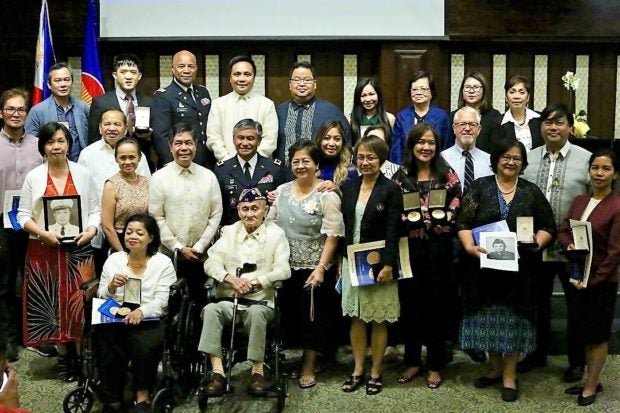 Vivid stories recounted during his lifetime by one guerilla, Avelino Tanjutco, brought to life for us the sound of war planes flying overhead. Back then, when they heard a rumbling plane, they ran to a bunker built as bomb shelter. He camouflaged his sisters’ faces with black soot and spirited them away in a banca, paddling in darkness, as the Japanese forces arrived.

Brothers Avelino and Jacobo Tanjutco, were later inducted in the United States Armed Forces in the Far East (USAFFE) Luzon Guerilla Army Forces Unit at Pampanga Military District, although they had raised arms as early as the 1941 attack. Avelino then just graduated from law school at Arellano University in Manila, but he refused to recognize Japanese rule, so he and his brother left the comfort of their home to engage in warfare.

The infamous Death March began on April 9, 1942. It started from Mariveles, Bataan via San Fernando, Pampanga where some 70,000 prisoners of war, Americans and Filipinos, walked nearly 70 miles until they were transported by rail to Camp O’Donnell. Very few survived that march. Avelino was captured and sent to the camp, but he was one of the few lucky men who survived.

His father, Justice of the Peace and then Mayor Patricio Tanjutco, persuaded his connections to get him freed. At the time, Japanese soldiers took over the family’s Spanish-built home in Sulipan, along the Pampanga River. His term ended that year, but he was reelected Mayor during the Liberation in 1945, according to the record of Chief Executives of Apalit, Pampanga.

These stories I’d like to tell the next generation as a proud daughter of a war veteran, the guerilla Avelino, and as granddaughter of a political survivor of World War II, Patricio Tanjutco. Hundreds of guerillas, enlisted soldiers, names of those missing in action, and those killed in action appeared in declassified documents. To hear about the war is one thing, but to find the names of your loved ones in confidential military records, their role in espionage, sabotage, training and intelligence, is surreal. You might find somebody you know in Pampanga in this declassified USAFFE list: http://collections.pvao.mil.ph/Collections/Guerilla/Box%20511/1431856.pdf

President Truman reneged on Roosevelt’s promise to grant citizenship and full veteran’s benefits to the Filipinos who signed up as part of the Commonwealth and the USAFFE. The RescissionActof1946(38 U.S.C. § 107) retroactively annulled benefits that would have been payable to Filipino troops on account of their military service under the auspices of the United States during the time that Philippines was a U.S. territory.

Fast forward to the future, a modern-day American military hero, himself a son of a WWII Filipino veteran, and a casualty of political wars in the White House and Pentagon: Major General Antonio Taguba was forced to retire after he faithfully complied with his job of investigating human rights violations and sexual abuses committed by U.S. Army personnel at Abu Ghraib prison in Iraq.

“The General’s Report” by Seymour Hersh, published by The New Yorker several months after his retirement in January 2007, uncapped the details of what transpired after he was called by then Secretary of Defense Donald Rumsfeld in 2004. An outstanding public servant and hero to Filipinos and Americans alike, Gen. Antonio Taguba continued his mission to bring justice and recognition to Filipino veterans who were forgotten by the U.S. government.

(2) in an active-duty status under the command of the United States Armed Forces in the Far East; and

The Filipino Veterans Recognition and Education Project (FilVetREP), headed by Gen. Taguba, was the proponent of the CGM legislation and is the recognized national point-of-contact for the CGM-related activities. It is a nonpartisan, community-based, all-volunteer national initiative whose mission is to raise awareness through academic research and public information and obtain national recognition of Filipino and Filipino American WWII soldiers across the United States and Philippines for their wartime service to the U.S. and the Philippines from July 1941 to December 1946.

FilVetREP has been designated by the U.S. Mint as the official liaison for the design process for the Filipino Veterans of WWII Congressional Gold Medal. In consultation with FilVetREP, the designs have been approved by the U.S. Mint. Each replica gold medal weighs one pound of bronze. 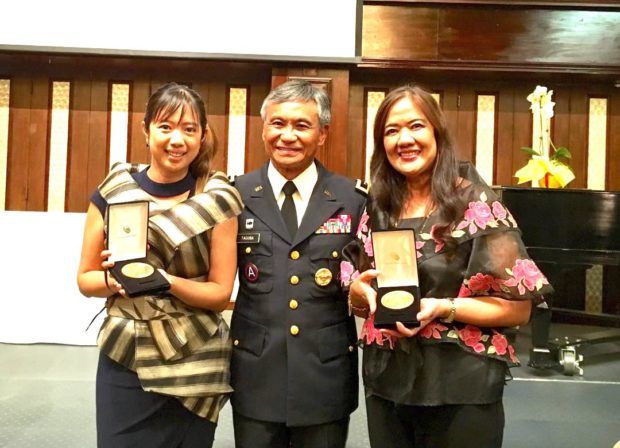 The Mint is producing 500 bronze replicas to be presented to eligible (meaning, registered) veterans or next of kin. Unfortunately, younger guerillas below 18 years of age, including the Philippine Military Academy cadets who were told to go home at the outbreak of war but instead, organized their own ROTC guerrilla units, were not registered on USAFFE records.

Forty-fourawarding ceremonies have been held across the U.S. since Oct. 2017. The NYC awarding on Sept 8, this year was an emotional day. Fifteen Filipino World War II veterans were honored in a ceremony organized by the Philippine Consulate General through Consul General Claro Cristobal and FilVetREP led by retired Major General Antonio Taguba at the Kalayaan Hall of the Philippine Center.

The families were each given a copy of Public Law 114-265 otherwise known as the Filipino Veterans of World War II Congressional Gold Medal Act of 2015, for framing. Gen. Taguba clarified that similar awarding will be held at the U.S. Embassy in Manila. For those seeking information, the FilVetREP.org website continues to provide updates. Ben de Guzman volunteered to process applications. A film showing was presented showing the history of CGM:https://youtu.be/AL89Yv_JhyU

Consul General Cristobal expressed his most profound gratitude to the Filipino Veterans of World War II for the extreme sacrifices and bravery they unselfishly showed to protect freedom and democracy, “We and the generations of Filipinos to come owe you our thanks and respect.  Because of you, we are able to enjoy the fruits of progress, freedom and democracy.”

The passage of CGM law brought into fruition the efforts of Gen. Taguba, FilVetREP, and all those who lobbied and supported the passage of the bill in the U.S. Senate and House of Representatives, particularly those in the Northeast, various groups in the Fil-Am community and the Philippine Foreign Service Posts led by the Philippine Embassy in Washington, DC.

As Gen. Taguba said, “From the moment a soldier enlists, we inculcate loyalty, duty, honor, integrity and selfless service.” It is indeed one of uncommon valor to offer his selfless mission to get these forgotten war heroes recognized 75 years later. A smile must’ve cut through the gates of heaven from each of the men and women who had gone ahead, a message to the General that aptly says, “Thank you, Sir.”