Is your overtime pay computed correctly? 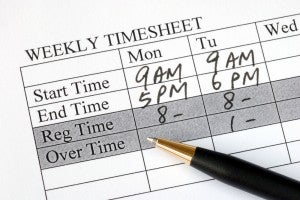 Hector Alvarado worked for Dart Container Corporation as a warehouse associate for about16 months. Per Dart policy, employees who worked a full Saturday or Sunday shift are paid an attendance bonus of $15 per day. This bonus was paid regardless of whether the employee worked overtime or not.

Alvarado filed a lawsuit against Dart alleging that the company’s formula for calculating overtime pay did not comply with the law. Dart responded that its formula was lawful as it was derived from federal law, which in this case should apply to the calculation of bonuses because there was no California law providing a formula for calculating overtime on bonuses. Both lower court and the appellate court ruled in favor of Dart and agreed that its overtime formula complied with federal law and did not conflict with California law. The employee appealed to the California Supreme Court.

The California Supreme Court had to rule on the issue of how to compute an employee’s pay if such an employee was receiving a bonus and also worked overtime.

However, if the employee is paid an hourly rate plus some other type of compensation, andthe employee works overtime too, then the employee’s “regular rate” for purposes of computing overtime, must be determined.

Therefore, employees who receive a nondiscretionary bonus for their productivity or performance, will need to have their bonus included in the computation of any overtime pay. The bonus is apportioned over the workweeks in which the bonus was earned. For example: The employee receives an hourly rate of $15 per hour, and receives a performance bonus of $2000 in a 6-month period (or 26 weeks). The employee’s normal overtime rate would be $22.50. However, since the bonus is part of the employee’s wages, then the employee’s overtime rate should be $25.38, not $22.50.

A difference of $3 per hour may become significant when spread over a long time. An employee who works overtime for an average of 5 hours per week may lose $780 per year. This is not small change since the employee may recover wages for as much as four years.

Other situations where the overtime rate is increased based on the methods of compensation include instances when employees are additionally paid shift differential pay,piece rate pay, or commissions(generally for inside salespersons or employees at retail or service establishments). Whether the difference is cents or several hundred dollars, California has consistently upheld the public policy of paying employees’ overtime pay correctly.

In the case against Dart Container, even though Dart computed the overtime regular rate according to federal law, the method did not quite measure up to the method advocated by California’s Labor Commissioner. The high court noted that the Labor Commissioner’s interpretation of state law may be correct, and that the formula advanced by the employee was “marginally more favorable to employees” than the federal method.

Even though the high court limited its decision to flat-sum bonuses as opposed to other kinds of non-hourly compensation, such as production bonuses, piece work, and commissions, the issue of correctly computing the amount of your overtime compensation under the law can be highly technical and may become confusing. However, getting it right may mean more wages to benefit you and your family.