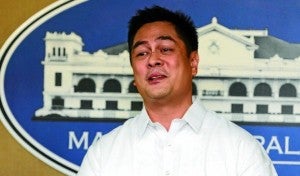 Inquirer columnist and Presidential Communications Secretary Martin Andanar is a star in the eyes of Team Trump.

Andanar has won accolades from key members of the Trump Administration who praised his “inspired and staunch devotion to alternative facts and creative communications.”

“This Andanar guy is just amazing,” Conway said. “His grasp of alternative facts is simply breathtaking. We definitely can learn much from this Filipino.”

Spicer said he wished he had Andanar’s cool ability to respond to the toughest questions from media.

“How does he do it, spout nonsense and not be flustered when reporters expose them as nonsense? I just lose it whenever that happens to me in the White House, like that time I yelled at those bozos to stop using the term ‘ban’ to refer to the ban against Muslims — even though President Trump and I used it repeatedly. Andanar is my hero.”

“It is such a revolutionary concept, one that clearly fits into our vision for presidential communications based on ‘alternative facts,’” she said.

Conway’s assessment quickly won approval from the principal proponent of the Duterte Administration’s communications philosophy, the Committee for the Advancement of Creative Imagination and Systematic Institutionalization of Rodrigo’s Aspirations, also known as CACI SIRA.

“We are honored that the Trump Administration recognizes the powerful guiding principle of the Duterte Administration which is leading the Filipino nation with the creative reframing of social and economic realities,” CACI SIRA said in a statement.

“Secretary Andanar is the Duterte administration’s secret weapon when it comes to creative imagination. It’s no surprise that even the White House recognizes his skills and eloquence.”

Andanar has become well known for inspiring, eloquent portrayals of Duterte in his column in the Philippine Daily Inquirer.

Recently, he also shared his sharp insights into the Trump Administration after witnessing the new American president’s inauguration. In his column, Andanar called Trump “President of the Forgotten.”

“There may be two Americas: the thriving urban economies driven by new technologies and new lifestyles, pitted against ‘Middle America’ composed mostly of white working-class people producing basic things like coal and cars,” Andanar wrote. “Trump is president of the latter America. He is seen as the savior of a faltering industrial economy, the one that would resurrect the Rust Belt and make it the engine for a nation that wants to be ‘great again.’”

Andanar’s powerful and poetic endorsement of Trump was noted by the American president himself.

“This guy Andanar is just fantastic,” President Trump said in an interview with CACI SIRA. “Mr. Andanar is a magnificent communicator, believe me. My friend Rodrigo Duterte is a very lucky guy. I wish my people would always talk about me that way.

“But instead, they just keep messing things up and getting lampooned on Saturday Night Live. Sad.”