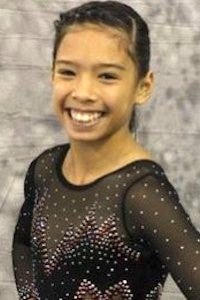 PARAMUS, New Jersey — Corinne Bunagan, a 15-year-old Filipino American gymnast from Ramsey, New Jersey, will represent the Philippinesat the Gymnastics World Championships in late October. The only bigger competition is the Olympics.

Bunagan’s family decided to pull her out of school midway through sixth grade so she could train more. She practices six hours a day and follows an online curriculum. She is set to graduate in the spring of 2021.

Bunagan is arguably one of the best gymnasts in the United States, being the first gymnast from ENA to compete in Gymnastics World Competition.

But she is not yet part of the American gymnastic elite, says her trainer, Craig Zappa of ENA Gymnastics in Paramus, according to NorthJersey.com. She needs to compete on a higher level and establish more wins to break into that circle.

So, Bunagan became a dual citizen with the help of her parents. She joined a competition in the Philippines in May, a national championship, and finished first in the all-around, giving the Philippines a new top gymnast.

Bunagan then represented the Philippines in the recent Asian Games in Indonesia, placing 12th all-around and was the youngest competitor in the field, according to NorthJersey.com. Bunagan stays in touch with the national team coaches in the Philippines.

Zappa/ENA has to provide much of the travel costs for the World Championship in Qatar, so they’ve set up a GoFundMe site tohelp.

“Traveling and getting to see different places that I wouldn’t usually see, especially through gymnastics – a sport I love – is one of the things I wanted to do when I started,” Bunagan told NorthJersey.com. “I wanted to compete internationally and see the world.”

You can help Corinne Bunagan get to the Gymnastics World Championships by donating to her GoFundMe page.