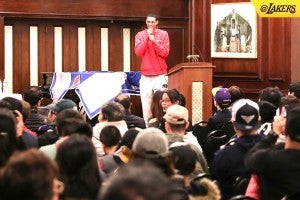 Expressing his gratitude several times over, the towering Fil-Am, who stands at 6’5,” appeared self-conscious at the press conference, in stark contrast to the confidence he displays on the basketball court. He admitted to a love for adobo and sisig, to the crowd’s delight.

About 170 Filipino basketball aficionados were invited by the consulate to give Clarkson a warm welcome. He was joined by his father Mike Clarkson and manager Tim Fuller at the event. 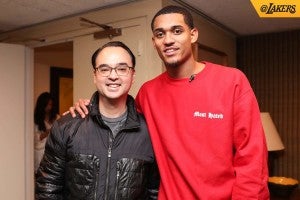 Among the attendees, community leader Laura Garcia described the NBA superstar as carefree yet guarded.

“I was actually trying to size him up during the gathering,” Garcia told INQUIRER.net. “First of all, he is very young—only 24 years old. Most young Americans I know—well, not just Americans, Filipino American young adults like him—are carefree and with an easy spirit. He seems to be a bit ‘guarded,’ no pun intended.”

Garcia added that she found Clarkson’s father more animated than the NBA superstar himself, but appreciated the effort to recognize his Filipino roots and to spend time with fans.

“For someone who earns $12.5 million a year, he is not cocky and snobbish. For that, he has my support. When Michael Jordan retired, I wasn’t interested in basketball as much anymore. Let’s see if Jordan Clarkson will get my interest back in basketball,” she said. 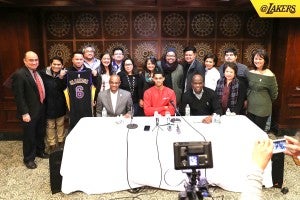 “He was definitely shy at the beginning of the press conference, very light-spoken, but then he warmed up as it went along,” she told INQUIRER.net. “For me, he was sincere because he wasn’t trying to fake smiles or anything. He answered the questions to the point. I personally admired how much he stressed that it took a lot of hard work to get to where he is.”

In his remarks, Consul Felipe Cariño III welcomed Team Jordan Clarkson to the Philippine Center and introduced Clarkson to the community as an inspiration to Filipinos and Fil-Ams alike.

“Jordan Clarkson belongs to a crop of Filipino Americans who have broken the glass ceiling in the U.S. in fields such as arts, sports, fashion, technology and business,” Cariño told the crowd. He said Clarkson’s success in basketball contributes to the larger community by inspiring people to reach their full potential. 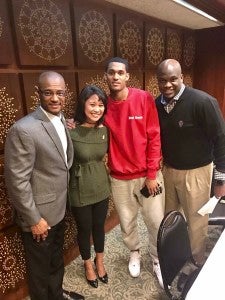 Philippine Sen. Alan Peter Cayetano, an avid Lakers fan, and his wife, Taguig City Mayor Maria Laarni Lopez Cayetano, were among the adoring fans in the audience. The two managed to swing by the consulate to congratulate Clarkson on his success in the NBA.

Cayetano called Clarkson an ambassador of basketball among younger Filipinos and Fil-Ams. He went on to thank Clarkson’s father for his effort to bring Jordan closer to the Filipino community.

“I admire him [Clarkson] for embracing his Filipino roots,” Lakers fan Rasmin Diaz told INQUIRER.net. “The fact that he reached out to the community, it only goes to show that he’s proud to be one of us. Not every mainstream celebrity does that!”