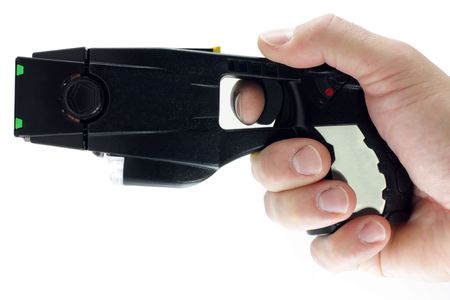 An 11-year-old girl suspected of stealing food from a grocery was stunned with a taser gun by an off-duty police officer working as a security guard in Cincinnati, Ohio.

“It hit my back real fast and then I stopped, then I fell and I was shaking and I couldn’t really breathe,” recounted Donesha Gowdy to NBC News in an interview with her mother yesterday, Aug. 8. “It’s just like you’re passing out but you’re shaking.”

Apparently the 11-year-old was stunned after she supposedly ignored and walked away from the police officer identified as Kevin Brown while at a Kroger Store. Donesha asserted she neither made an attempt to fight Brown nor was aggressive towards the police officer.

“I’m not saying what she did was cool, I’m not saying that, but what he did was totally wrong,” Donesha’s mother, Donna, told NBC News. “Whoever thought of these rules needs to step back and think. I’m not just worried about my own [child]. I’m not trying to see any kid get done like that.”

Cincinnati police department procedures specify that officers should not use tasers on children below 7 years old and people above 70. Moreover, the procedure states that tasers should only be used on suspects actively resisting arrest: “An individual simply fleeing from an officer, absent additional justification, does not warrant the use of the TASER.”

“We are extremely concerned when force is used by one of our officers on a child of this age,” noted Cincinnati Police Chief Eliot K. Isaac. “As a result, we will be taking a very thorough review of our policies as it relates to using force on juveniles as well as the propriety of the officers’ actions.”

Donesha was taken to a children’s hospital after she was tased, the report said. She was charged with theft and obstructing official business but was released not long after to one of her parents.

Vice Mayor Christopher Smitherman has launched an investigation into the incident. Meanwhile, Brown has been put on restricted duty.

“I told my daughter: ‘I hope you learn from this,'” remarked Donna. “‘You risked your life over some candy.'” Kate Matriano/NVG