Nicholas Pilapil. His play “Young Dumb Broke High School Kids” will have a staged reading by Artists at Play. CONTRIBUTED

The play will have a staged reading at “Spring Readings: Two Plays, One Day,” produced by theater company Artists at Play (AAP) as part of its annual spring staged reading series.

In the play, the pregnant Bliss, the loveless Olivia, and orphan Miles “try to sort out their lives in the most dangerous ways.”

Other Filipino Americans involved in the play are Christopher Aguilar, who is part of the cast, and playwright and screenwriter Michael Golamco, who is the dramaturg. Marie-Reine Velez is one of AAP’s founding artistic leaders.

The show’s other play will be “Three Women of Swatow” by Chloe Hung, a comedy where three generations of women try to prevent the resurrection of a headless chicken.

Each staged reading will be followed by a talkback session.

Part of AAP’s objectives is to present stories of underrepresented communities and to develop and showcase new works to the Los Angeles community “in the midst of a national discussion on the lack of diversity and representation.”

Other Filipino American playwrights’ works that have been featured in AAP’s staged reading series include “Marabella” by Boni Alvarez in 2014 and “tot: The Untold, Yet Spectacular Story of (a filipino) Hulk Hogan” by Victor Maog last year, which went on to be staged by Mu Performing Arts in Minneapolis, Minnesota.

The group has also featured “As We Babble On” by Nathan Ramos in 2016, which will be staged by East West Players later this year.

While Pilapil has to read plays as part of his work as a producing member of Artists at Play, he mostly does so “for my pure enjoyment,” he says. Christopher Aguilar (left) is in the cast and Michael Golamco is the dramaturg. STEFANIE LAU

“I read a lot of plays. I’m a huge new play lover, I’m always trying to read something new and find my next favorite writer.”

It was after going through many plays that had nothing new to tell that sparked his own foray into playwriting.

“Initially, I thought ‘I can do way better than that!’ What I had been reading was just a lot of the same thing, like white people in a living room just talking about their problems that aren’t really problems.

“I realized that I have a unique point of view and experiences that are different from the white narrative. I wanted to try to contribute that to the theater. I wanted to write more roles for Asian American actors.”

He took a workshop under playwright Madhuri Shekar and began to craft his own works. “Oddly, playwriting felt like a form of activism. To be able to tell a story and share my point of view felt kind of empowering for me.”

But what really hooked him was experiencing an audience react to his first play. His musical comedy “Before and After” received a staged reading at East West Players in 2015.

“Once that audience laughed, I was, like, ‘I’m changing careers!’”

He describes his new play as a love story.

“I wanted to write a love story. At the beginning of this play’s life, it was a boy-meets-girl kind of story where they just fall in love. It was an epic love story that traveled through time and had a talking fetus,” he says. “It was so stupid.”

Though he hated the first iteration of this play, “I loved its characters, specifically the characters when they were 16 years old in 1997.”

“I trashed the play but kept those characters. It became less of the typical boy-meets-girl love story and more of a story about learning to love yourself and the life you live.”

“Young Dumb” has already gone through a previous staged reading and a workshop by The Vagrancy theater company last year.

For this staged reading, Pilapil is working with playwright Michael Golamco, who is serving as the dramaturg.

“It’s exciting to work with Michael. He’s definitely someone to look up to. He’s doing so many amazing things with film and TV,” Pilapil says.

One of Golamco’s most popular plays is “Cowboy Versus Samurai,” where an Asian American man falls in love with an Asian American woman who only dates white men. He is also a writer/producer for television, with credits such as Syfy/Netflix’s “Nightflyers” and NBC’s “Grimm.” 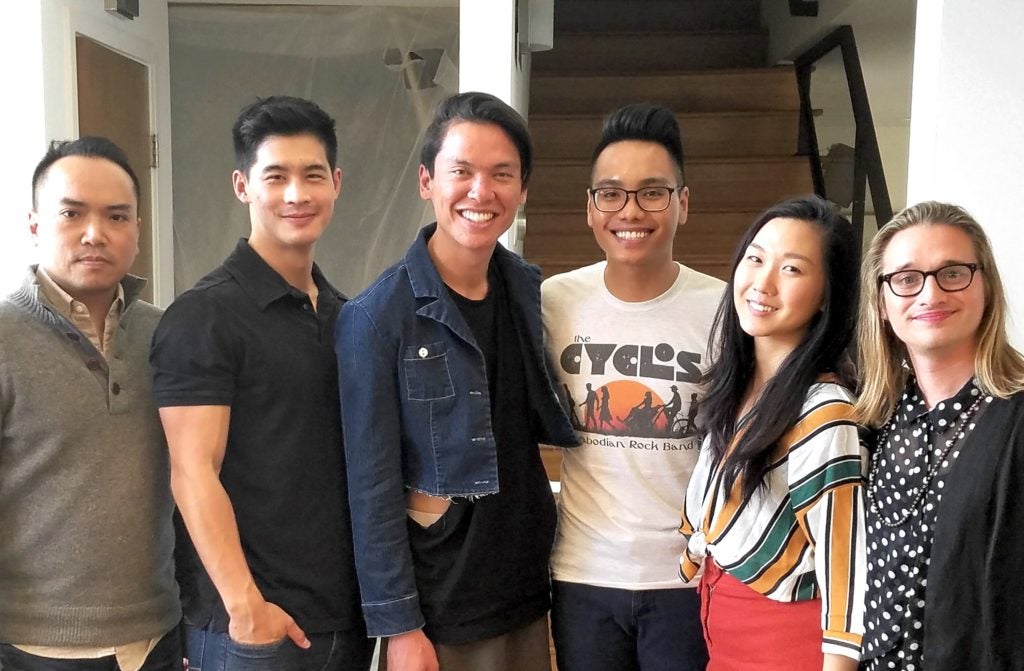 “As another Filipino American, it’s so cool to see one of our people really succeed. As a fan of his plays, I think he’s a fantastic writer, so I really trust his opinion and point of view. He’s so smart.”

Aside from playwriting, Pilapil is also a songwriter and a screenwriter. He is cofounder of Becky and Baldwin, a production company, and has written short films “I Don’t Love You” and “Zoe.”

There are no plans yet for full stagings of Pilapil’s plays. “A production would be a dream!”

In the meantime, he has another play, “Celebrity Trash,” that will have a staged reading on May 19 at the Lyric Hyperion Theatre by The Vagrancy.

“‘Celebrity Trash’ is an adaptation of August Strindberg’s ‘Miss Julie,’ which is about class and sex. My adaptation adds explorations of race, white male privilege and celebrity culture. It’s set in 2007, before the social media age, when tabloids were super popular and Britney Spears had just shaved her head.”

READ about Artists at Play’s staged reading of “tot: The Untold, Yet Spectacular Story of (a filipino) Hulk Hogan” last year here.