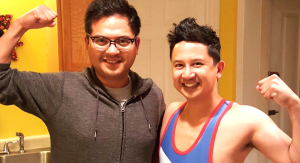 LOS ANGELES — A play about a young Filipino immigrant and his wrestling fantasies will have free staged readings in different Los Angeles libraries in May.

Victor Maog’s “Tot: The Untold, Yet Spectacular Story of (a Filipino) Hulk Hogan” follows Tot as he leaves Martial Law-era Philippines and reunites with his parents in San Francisco after a decade of separation. He copes with loneliness in his new surroundings by imagining wrestling scenarios.

The play will be presented by theater group Artists at Play (AAP) at Los Angeles Public Library branches Mar Vista (May 8), West Los Angeles (May 13), and Malabar (May 18).

The staged-readings of “Tot” are part of the library’s “LA Made” program, a cultural series featuring free music, dance, theater, and discussions with local entertainers at libraries throughout the city. 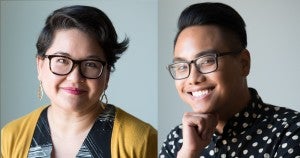 Director is Rodney To, who’s worked with AAP on “Ching Chong Chinaman” (choreographer) and “Edith Can Shoot Things and Hit Them” (actor).

His recent directing credits include “Mutt: Let’s All Talk About Race!” for East West Players and the “Pun Plip Pridays” series under “Kababayan Today with G Tongi” on cable channel LA18. TV acting credits include “Parks and Recreation,” “Rosewood,” “Wilfred” and the forthcoming “Redliners” on NBC.

In addition to Maog and To, AAP cofounding artistic leader Marie-Reine Velez and producer Nicholas Pilapil are also Filipino Americans. (Pilapil’s play “Before and After” had a staged-reading at The Fountain Theatre in early April.)

Velez says, “I was struck by how the play’s funny without being a parody, showcases deep emotion without being melodramatic, and all sprinkled with fun theatrical and meta-theatrical elements.”

“I was delighted when I read the play because it gives us a fully human story of immigration through a child’s perspective, a child who doesn’t fully understand the reality of the ‘American Dream,’ as well as the circumstances and hardships of moving from one country and culture to another.”

AAP has previously staged full productions or staged readings of works by Fil-Am playwrights such as A. Rey Pamatmat (“Edith Can Shoot …”), Michael Golamco (“Cowboy Versus Samurai”), Nathan Ramos (“As We Babble On”), and Boni Alvarez (“Marabella”).

Maog says, “Stories that humanize immigrants and the complexity of the USA are more needed now the ever. Some of them need a new lease on life, whiles others are escaping certain death.”
Born in the Philippines and raised in the San Francisco Bay Area, Maog is currently artistic director of Second Generation (2g) Productions, an Asian American theater company in New York, and a show director for Walt Disney Company. 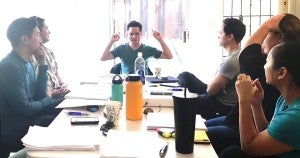 Cast in rehearsals. ARTISTS AT PLAY

“Tot” was commissioned and had its world premiere last year by Mu Performing Arts, an Asian American theater group in Minneapolis, Minnesota. It was directed by Mu’s artistic director Randy Reyes (who also played the lead role).

Local reviews of that staging noted that the play’s “themes … resonate deeply as America’s presidential election becomes a referendum on the demonization of immigrants” (City Pages); and that it is “emotionally striking” (Aisle Say Twin Cities) and “emotionally rewarding” (TalkinBroadway.com).

“The world premiere in Minneapolis last year was an extraordinary opportunity. While it was a very positive experience, I’ve taken time to digest some of the audience reactions and feedback and will continue to fine-tune, clarify, and deepen this little-big play,” Maog says.

“I’m always hesitant to jump back into the ring with the play because it takes so much out of me, but I’m wearing a helmet and other protective gear and hope no bones break.” 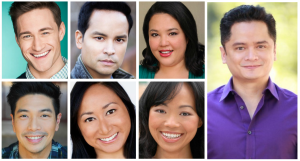 “We all immediately hit it off,” Velez says. “We shared our experiences working in theater and the different challenges for Asian American theater in New York and Los Angeles.”

Maog had informed Velez of his plans of refining his play. This spurred Velez to include the “Tot” in AAP’s staged readings series, which includes play development and workshopping for playwrights.

“The readings offer us opportunities to work and collaborate with writers, directors, and actors in a more casual setting than our mainstage productions, and this setting felt like the right fit to have our first collaboration with Victor.

“We are very much looking forward to diving deep into this play and sharing it with audiences around Los Angeles,” she says.

READ a previous interview with Rodney To here.