Hopeful signs at Oscars on the shape of things to come

Hopeful signs at Oscars on the shape of things to come 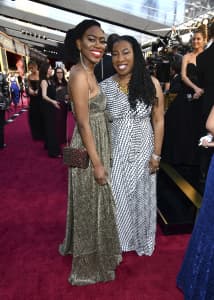 Kaia Burke, left, and Tarana Burke arrive at the Oscars on Sunday, March 4, 2018, at the Dolby Theatre in Los Angeles. AP PHOTO

Those of you know that I am often the burr in the side of those who mispronounce the centerpiece of my surname’s spelling, the Filipino “double-L.”

It’s the Filipino double-L hell. Do your correct and stand up for your mother tongue, and say “GILL-yermo”?

Or do you conform and say it the way most Spanish-speakers say it, “GEE-yermo”?

It’s a major point of identity. Honor the colonizer? Hell no. It’s my line in the sand with director Guillermo del Toro.

We disagree on how to say his first name which is my last name. That’s diversity for you. At least, I say “Gill” as in the breathing apparatus of a fish or amphibian.  It provides a way for some fluid common ground.

Del Toro’s film, “The Shape of Water” had me at glub-glub.

Haven’t seen it? It’s a fabulistic tale that brings together a mute woman, her gay neighbor, an African American co-worker, and a foreigner who happens to be a doctor/spy, who unite in an effort to save an amphibious god tortured in a government lab.

Honestly, this is really a fantasy date-night movie, with multiple love scenes. In fact, love is the message.

If you’re an “Other,” no matter what species, this is the movie that will give you hope and speak to your heart. That’s about the best thing a movie can do in these xenophobic and fear-mongering times.

Among all films, “The Shape of Water” led with 13 nominations, and won four awards on Oscar night including Best Picture, Best Director, as well as original score, and production design.

Del Toro’s best movie victory capped a night of the Oscar’s embrace of diversity, one that saw historical precedents like the first African American Oscar winner in original screenplay (Jordan Peele, “Get Out”), or the first film winner where the  main character is a transgender actress (“A Fantastic Woman,” featuring Daniela Vega, winner of Best Foreign Language Film).

The  #TimesUp movement also got major play with powerful statements from warrior/victims like Ashley Judd, who uttered my vote for bumper-sticker phrase of the night: “Equality, Diversity, Inclusion, Intersectionality.”

But it was Francis McDormand, Best Actress winner for “Three Billboards Outside Ebbing Missouri,” who got the crowd roaring when she had all the women winners and nominees stand to be acknowledged to let powers that be know the sheer amount of talent in the room with movies and stories to tell.

McDormand’s sent a call to action by uttering the phrase that pays, “inclusion rider.”

It was a not so subtle hint to studios and producers to bolster contract language that would make diversity a requirement for hiring on future projects. Affirmative action? No, just good business sense in a modern world.

After prior years’ complaints that the Oscars were too white, this was an ever evolving and more inclusive Oscars.  Comedian Tiffany Haddish even joked, “Are the Oscars too black now?”

Even the diverse Asian American community was visible in the mix with winners (Filipino American Brooklynite Robert Lopez, who with his wife, Kristen Anderson-Lopez, won Best Original Song for “Remember Me” from “Coco”); and presenters like Star Wars’ franchise player Kelly Marie Tran, and Kumail Nanjani, a nominee for original screenplay for “The Big Sick.”

Nanjani, a Pakistani-American from Iowa, presented with Lupita Nyong’o, a previous best supporting actress Oscar winner, who is of Kenyan-Mexican descent. They both spoke directly about the impending March 5 DACA deadline hanging over the heads of Dreamers.

Nanjani added,”To all the Dreamers out there, we stand with you.”

The party before the midnight deadline

That means in spite of Trump’s deadline of March 5, if you’re eligible to renew or apply for DACA protection, you should act now.

Still, even though Congress and the president remain preoccupied by gun control issues, tariffs, and a White House in turmoil and have done nothing, that hasn’t stopped Immigration and Customs Enforcement (ICE) agents.

ICE has raised the FQ — the  Fear Quotient– to new heights after conducting immigration crackdowns in  Northern California sanctuary cities.

More than 200 arrests were made last week from the San Francisco Bay Area to Sacramento.

And it doesn’t impact Dreamers, so much as law-abiding people of all ages, many of whom are undocumented.

“There’s a war going on now between ICE and sanctuary cities,” Jeff Adachi, the San Francisco Public Defender told me in a phone interview.

He said ICE has come in and created a sense of chaos by “indiscriminately detaining people.”

ICE may be looking for criminals, but they end up snaring tax-paying non-criminals. The people are often detained with no right to a lawyer, placed in custody in detention centers hours from the Bay Area, which make it difficult to get much support from family and friends.

Adachi said there are 1,400 unrepresented people being detained in the San Francisco immigration courts currently.  His public defenders are quickly trying to reduce that number.  They know that with a lawyer, a detainee has three-times better chances of prevailing in one’s case.

If it all feels overwhelming, like you’re drowning in some anxiety trough of Trump’s making, then it’s a good time to escape to the movies.

And that was Del Toro’s message to Dreamers and lovers of movies.

When accepting the Oscar for Best Picture, del Toro proudly said, “I am an immigrant.”

But he’s also a filmmaker who travels to different countries because of his work, and said he lives in a world of his own making. “The greatest thing our art does and our industry does is to erase the lines in the sand when the world tells us to make them deeper.”

It’s a world without walls, one that doesn’t define natives and foreigners as “us and them,” but as one. It’s a truth Del Toro discovered while following his art.

On Oscar night, he passed along his best advice as a movie maker and humanitarian.

“Everyone who is dreaming of a parable, of using genre fantasy to tell their stories about the things that are real in the world today, you can do it,” del Toro said. Then he referred to any perceived barriers in the film industry and reached out.  “This is a door. Kick it open and come in.”

It was an Oscar-winning invitation to inclusion, to take a deep breath, and keep dreaming, and not just at the movies.

The fight isn’t over. If Oscars are a barometer, there’s a sense of justice on the horizon coming to a 16-plex near you.

Emil Guillermo is an award-winning journalist and columnist for the Inquirer’s North American bureau. Listen to his podcasts on iTunes. Follow on Twitter @emilamok