Suspect in Illinois parade shooting charged with 7 counts of murder

Suspect in Illinois parade shooting charged with 7 counts of murder

The suspect accused of opening fire on a July Fourth parade near Chicago was charged on Tuesday with seven counts of murder, as police revealed they had reported him as posing a “clear and present danger” after alleged threats to his family in 2019.

Robert E. Crimo III, 21, is suspected of shooting his victims from a sniper’s perch on a rooftop above the parade in the suburb of Highland Park, Illinois.

He would face a mandatory sentence of life in prison without the possibility of parole if convicted, Illinois state attorney Eric Reinhart said.

Reinhart said the first-degree murder charges would be followed by “dozens of more charges” and that he would ask that Crimo remain held in custody without bail at the suspect’s first court appearance, scheduled for Wednesday.

It was not immediately clear if Crimo had a lawyer.

Crimo had planned the attack for weeks, officials said on Tuesday. 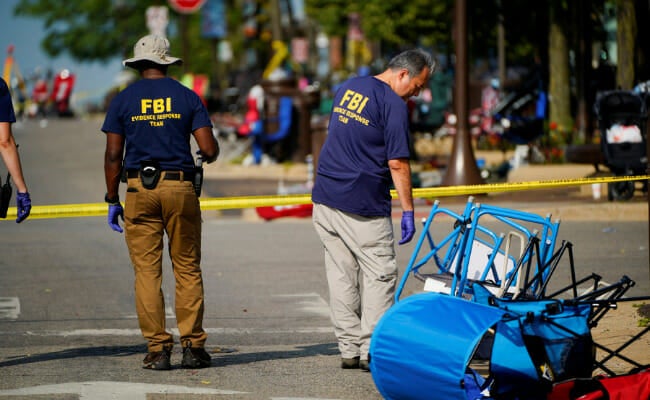 FBI agents investigate after a mass shooting at a Fourth of July parade in the wealthy Chicago suburb of Highland Park, Illinois, U.S. July 5, 2022. REUTERS/Cheney Orr

They said he fired more than 70 rounds at random into the crowd watching Monday’s parade, and that he was dressed in women’s clothes to help conceal his identity and blend in with the panic-stricken crowd as he fled.

“He blended right in with everybody else as they were running around, almost as if he was an innocent spectator as well,” said Sergeant Chris Covelli, a spokesperson for the Lake County Sheriff’s office, adding that the suspect has distinctive facial tattoos.

In addition to the seven victims killed by gunfire, more than three dozen people were treated in hospitals for gunshot wounds and other injuries.

Covelli said Crimo had two previous encounters with law enforcement – an April 2019 emergency-911 call reporting that he had attempted suicide and another in September of that year regarding alleged threats “to kill everyone” that he had directed at family members.

Police responding to the second incident seized a collection of 16 knives, a dagger, and a sword amassed by Crimo in his home, though no arrest was made as authorities at the time lacked probable cause to take him into custody, Covelli said. 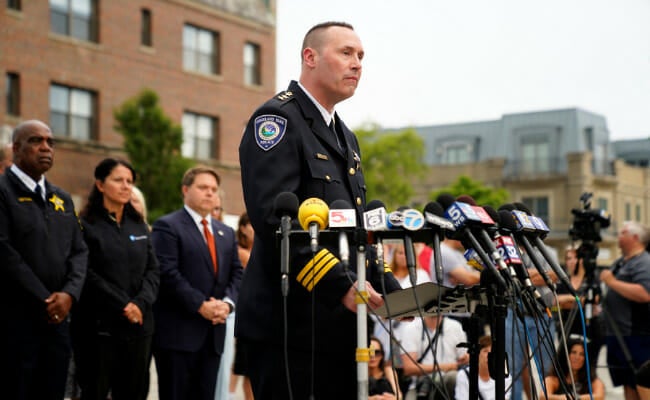 Highland Park Police Chief Louis E. Jogmen speaks during a press conference following the announcement that the suspect in the Illinois attack was charged with 7 counts of first-degree murder the day after a mass shooting at a Fourth of July parade in the Chicago suburb of Highland Park, Illinois, U.S. July 5, 2022. REUTERS/Cheney Orr

“There were no complaints that were signed by any of the victims,” Covelli said.

But a state “red flag” system, designed to allow police to seek a court order to seize weapons from people who are deemed to present a danger to themselves or others, appeared to have broken down.

Among those killed in Monday’s attack were Nicholas Toledo, a grandfather from Mexico in his 70s celebrating with his family among the flag-waving crowds, and Jacki Sundheim, a teacher at a nearby synagogue.

The shooting took place in a neighborhood with a large Jewish population, but police had no immediate evidence of any anti-Semitic or racist basis. Investigators were reviewing videos Crimo had posted on social media containing violent imagery.

The suspect used a high-powered rifle for the attack, similar to an AR-15, which he dropped at the scene.

He had a similar rifle in his mother’s car, which he was driving when police took him into custody, and owned other guns, all of which were bought legally in Illinois, officials said.

In all, Crimo had purchased five firearms, including rifles and pistols. 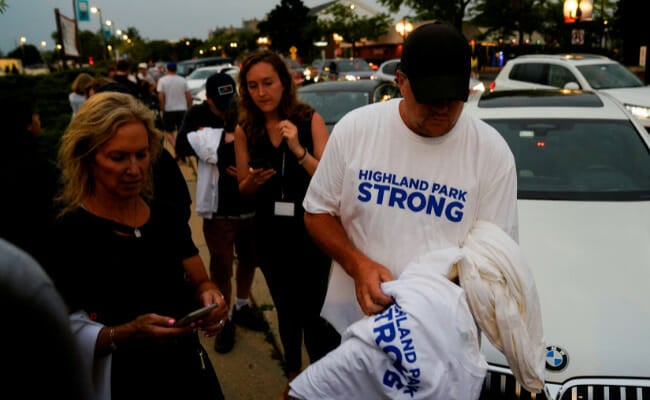 A man gives out shirts the day after a mass shooting at a Fourth of July parade in the Chicago suburb of Highland Park, Illinois, U.S. July 5, 2022. REUTERS/Cheney Orr

Highland Park Mayor Nancy Rotering said the community of 30,000 was in shock.

“This tragedy should have never arrived at our doorsteps,” she told NBC News. “As a small town, everybody knows somebody who was affected by this directly and, of course, we are all still reeling.”

President Joe Biden ordered U.S. flags to be flown at half-staff in mourning until sunset on Saturday.

A recent string of deadly mass shootings, including an attack in which 19 school children and two teachers were killed in Uvalde, Texas, on May 24, just 10 days after 10 people were slain in a supermarket in a predominately Black neighborhood in Buffalo, New York, has renewed debate about gun safety in America.

The U.S. Supreme Court last month asserted a constitutional right to carry weapons in public in a ruling that made it easier for pro-gun groups to overturn modern gun regulations. It has since thrown out a lower court ruling upholding Maryland’s ban on assault weapons. 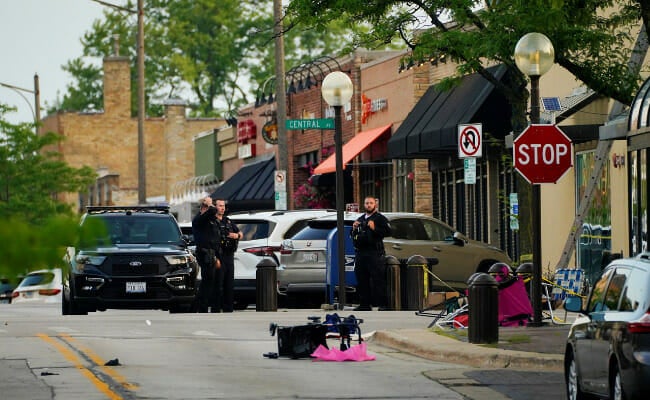 Police block a street after a mass shooting at a Fourth of July parade route in the wealthy Chicago suburb of Highland Park, Illinois, U.S. July 5, 2022. REUTERS/Cheney Orr

The law does not ban sales of assault-style rifles or high-capacity magazines but does take some steps on background checks by allowing access to information on significant crimes committed by juveniles.

Rotering, the mayor of Highland Park, said she knew the suspect when he was a little boy and a Cub Scout and she was a Cub Scout leader.

“What happened? How did somebody become this angry, this hateful?” she said. “Our nation needs to have a conversation about these weekly events involving the murder of dozens of people with legally obtained guns.”

The suspect’s father, Bob Crimo, ran Bob’s Pantry and Deli in Highland Park for at least 18 years, according to a Chicago Tribune business profile. Bob Crimo closed the deli in 2019 before he unsuccessfully ran against Rotering for mayor.

Online social media posts are written by the suspect or under his rapper alias, “Awake The Rapper,” often depicted violent images or messages.

One music video posted to YouTube under Awake The Rapper showed drawings of a stick figure holding a rifle in front of another figure spread on the ground.