The Texas gunman who murdered 19 children and two teachers posted an online message warning that he was going to shoot up an elementary school minutes before he attacked, Governor Greg Abbott said on Wednesday, as harrowing new details of the massacre emerged.

The gunman, whose rampage ended when police killed him, also had sent a message on Tuesday saying he was going to shoot his grandmother, followed by another internet post confirming he had done so, Abbott said at a news conference.

The suspect’s grandmother, shot in the face before her grandson left the home they shared and attacked the school, survived and called the police.

The gunman, identified as Salvador Ramos, 18, otherwise gave no warning he was about to commit what now ranks as the deadliest U.S. school shooting in nearly a decade, authorities said. 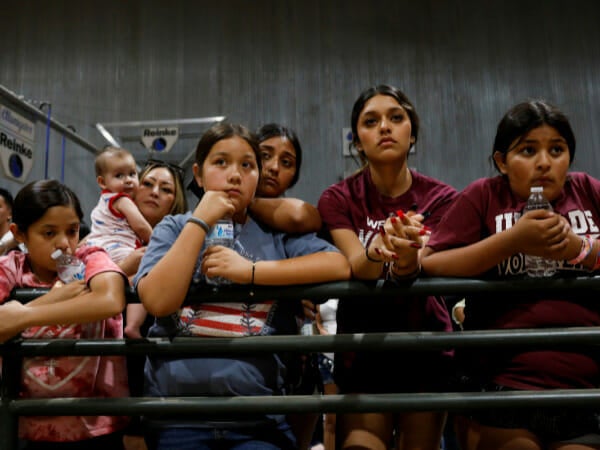 Fleeing the shooting of his grandmother, he crashed his car near Robb Elementary School in Uvalde, Texas, about 80 miles (130 km) west of San Antonio, then managed to evade a school police officer who approached him before running inside.

No gunfire was exchanged at that point, according to police. But authorities offered few details of the encounter, likely to become a focus of investigations, except to say that the suspect dropped a bag full of ammunition and ran toward the school when he saw the officer.

Ramos then entered the school through a back door carrying an AR-15-style rifle and made his way to a fourth-grade classroom where he shot all of the people who were slain. Authorities said he had legally purchased two rifles and 375 rounds of ammunition days before the shooting. 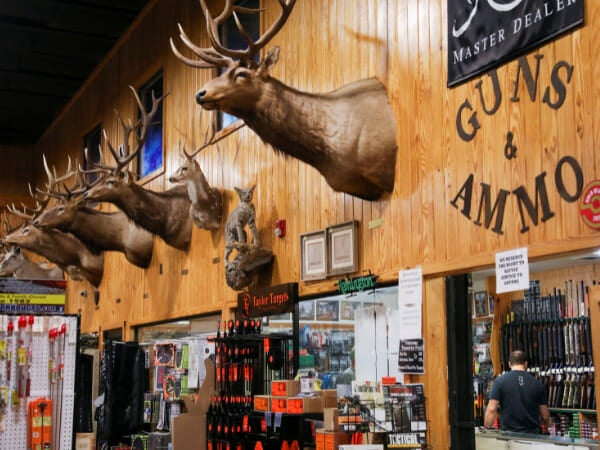 An interior view of Oasis Outback, the store where a gunman who killed 19 children and two teachers at Robb Elementary School purchased his weapons, in Uvalde, Texas, U.S., May 25, 2022. REUTERS/Lisa Krantz

Eventually, Ramos, a high school dropout with no known criminal record or history of mental illness, was shot dead by law enforcement.

The shooter’s online posts were made on Facebook, the governor said, but spokespeople for Facebook’s parent company, Meta Platforms, said they were private one-to-one messages discovered after the shooting. The company declined to say who received the messages or which of Meta’s platforms, such as Messenger or Instagram, was used to send them.

Victims’ loved ones took to social media to express anguish over the loss of children who never came home from school. 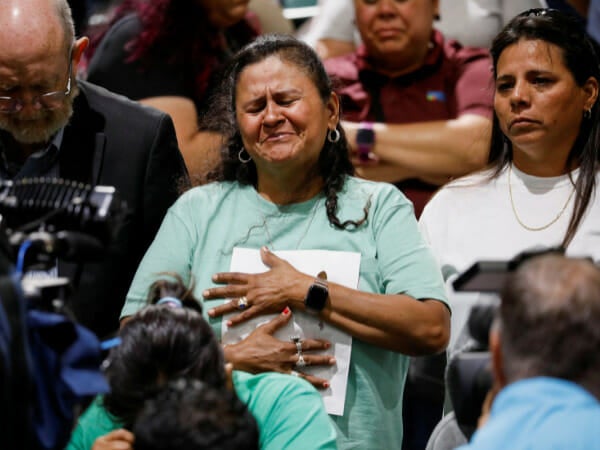 A woman reacts during a vigil a day after a gunman killed 19 children and two teachers at Robb Elementary School, at Uvalde County Fairplex Arena, in Uvalde, Texas, U.S. May 25, 2022. REUTERS/Marco Bello

“We told her we loved her and would pick her up after school,” Kimberly Mata-Rubio posted on Facebook in remembrance of her daughter, Alexandria Aniyah Rubio, a fourth-grade honor student. “We had no idea this was goodbye.”

Investigators have not suggested a motive for the shooting, and little about the suspect’s background immediately came to light.

The suspect’s mother, Adriana Reyes, was quoted in an interview with the British-based news site DailyMail.com describing her son as someone who “kept to himself and didn’t have many friends.”

In a sign of the charged political atmosphere, Beto O’Rourke, the Democratic candidate challenging Abbott in a November election, interrupted the news conference to confront the governor over the state’s permissive gun laws, shouting “You are doing nothing!” 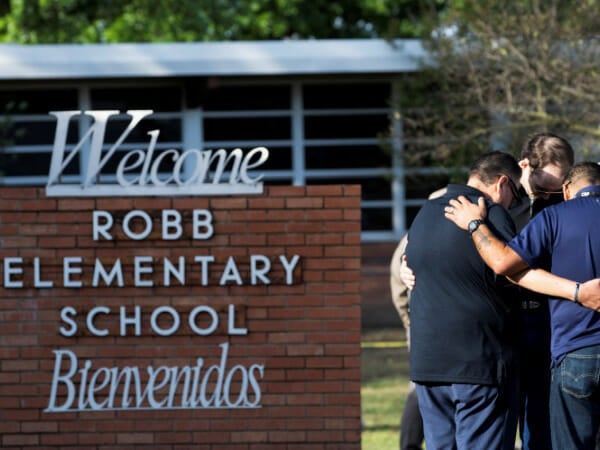 People gather at Robb Elementary School , the scene of a mass shooting in Uvalde, Texas, U.S. May 25, 2022. REUTERS/Nuri Vallbona

Several officials gathered on stage around the governor and yelled at O’Rourke. “You’re a sick son of a bitch who would come to a deal like this to make a political issue,” one of them said, though it was not clear who.

O’Rourke was escorted from the building and spoke to reporters outside. He said it was “insane” that an 18-year-old was legally permitted to acquire a semi-automatic rifle and vowed to pursue gun restrictions.

Abbott said stringent gun laws do not prevent violence, citing states such as New York. He said policy-makers should instead focus on mental health treatment and prevention. 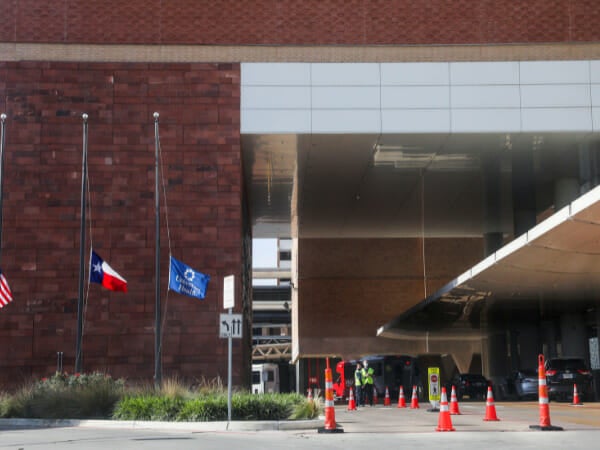 An exterior view of the University Hospital, where some of the victims of the mass shooting at Robb Elementary School in Uvalde, TX, are being treated, in San Antonio, Texas, U.S., May 25, 2022. REUTERS/Lisa Krantz

New legislation appeared unlikely to pass in Washington. Virtually all Republicans in Congress oppose tighter gun controls, and there was no sign the latest massacre would alter the equation.

In a statement, the NRA expressed sympathy for the victims but said the event would go on as planned.

World leaders expressed shock and sorrow. Pope Francis on Wednesday said he was “heartbroken” and called for an end to “the indiscriminate trafficking of weapons.”

Shootings have become so commonplace in American schools that data shows a gun being fired almost every day this year on school property, according to the K-12 School Shooting Database at the Naval Postgraduate School’s Center for Homeland Defense and Security.

The Texas rampage stands as the deadliest U.S. school shooting since a gunman killed 26 people, including 20 children, at Sandy Hook Elementary School in Connecticut in December 2012.

Uvalde, deep in the state’s Hill Country region, has about 16,000 residents, nearly 80% of the Hispanic or Latino, according to U.S. Census data.

By early evening, the elementary school remained cordoned off with crime-scene tape, as passers-by walked up periodically to hand off flowers and stuffed animals to a police officer who carried them over to a makeshift memorial taking shape near the building.

MOST READ
newsinfo Ferry catches fire, sinks off Bohol; 1 dead, 1 missing
entertainment Dennis Padilla answers Leon Barretto’s open letter: ‘Been reaching out to you for 15 years’
entertainment Leon Barretto steps up for sisters, asks dad Dennis Padilla: ‘Please stop resorting to public shaming’
entertainment Kathryn Bernardo now proud to be a morena, overcomes insecurities with BF Daniel Padilla’s help
newsinfo LPA to bring rain in Southern Luzon, Visayas on Monday – Pagasa
entertainment LOOK: Rita Daniela pregnant with first child
entertainment Ken Chan to Rita Daniela on pregnancy reveal: ‘Always here for you no matter what’
DID YOU KNOW?
5 Best Noise Cancelling Headphones of 2022
The Shakti Mat: Does It Really Work?
12 Best Travel Cameras to Capture Every Moment in 2022
Top 10 Best Fitness Trackers on Amazon
How to Shop for Engagement Rings Without Breaking the Bank
Top 10 Resorts in Hawaii for a Summer in Paradise