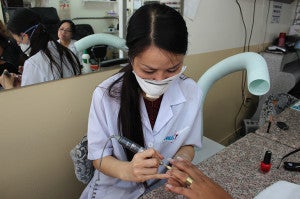 OAKLAND, California — What stands out upon entering Mai Dang’s nail salon, located on a busy street in Berkeley, California, is what’s missing — the stinging smell of nail products. That wasn’t always the case. For a decade, Dang suffered from the effects of the chemicals she used at work every day.

“When you do nails, workers get itchy skin and watery eyes,” said Dang, 40. She also used to have frequent headaches, and one of her workers developed asthma. So when she heard about an opportunity to improve the safety at her salon, she signed up.

“I work every day. I need the air to be pure, to be better for me. I have to take care of my health this way,” she said, speaking in Vietnamese through an interpreter.

Asian Health Services, a community clinic in Oakland, started The California Healthy Nail Salon Collaborative after the clinic identified a pattern of illness among nail salon workers. Its mission is to convince nail salons to adopt safer business practices.

“Practically every worker was experiencing some kind of health issue. And we realized that this was an epidemic,” said Julia Liou, planning and development director at the clinic and the co-founder of the collaborative.

Nail salons are big business in the United States — approximately $8.5 billion in revenue in 2015. Some of the chemicals used in salons are known to cause skin disorders and respiratory problems, and possibly even cancer, miscarriages and birth defects.

So far, there’s been little government regulation for workers. But California moved in that direction earlier this month when a new state law took effect that requires the Department of Toxic Substances Control to encourage cities and counties to create healthy nail salon recognition programs, and to publish guidelines for those programs.

The law also requires the department to create a consumer education program.

California boasts an estimated 8,000 nail salons employing more than 97,000 manicurists, according to the California Healthy Nail Salon Collaborative. The average annual income for a manicurist is $21,800.

Liou is trying to get salon owners to make safety changes voluntarily to improve worker health.

“We don’t want to create a fear where it’s like, ‘Oh nail salons are so scary that people can’t go to them,’” explained Liou. “But we want to create a space where both the owner and the customer can feel comfortable, and actually create a model where the return on investment ends up being worker health.”

Salons that participate in the collaborative must make significant changes to their business, including buying less toxic nail polishes, thinners and removers. All workers are required to wear specific types of gloves and masks when using certain products. Owners are also required to purchase a portable mechanical ventilation unit.

“It sucks in the air when I do artificial nails so the workers don’t have to breath in the toxic chemicals anymore,” explained Dang, as she turns on her unit with a remote control. More than 80 percent of salon workers in California are Vietnamese, and more than half are of reproductive age, according to the collaborative.

Alameda County certified Dang’s salon, Fashion Nails, as a healthy salon in 2013, based on her changes. In return, Dang got a certificate that she hangs in her window to let customers know she is part of the collaborative. Fashion Nails is also listed as a healthier nail salon on a government website.

The process, however, was not cheap. Dang said the safe products she uses cost about 30 percent more. Overall, she estimated that she spent about $3,000 on the upgrades. To pay for it, she raised her prices by $2 per service.

One of Dang’s customers, Genell Johnson, said she’s more than willing to pay extra for the service: “You get what you pay for. That’s what they always say, and it’s very true.”

A survey of customers by the collaborative found that 90 percent were willing to pay at least a dollar more for services they knew were healthier. Johnson says she’s a regular at Fashion Nails but had no idea it was a healthy salon.

“Now I’m going to spread the word,” said Johnson. “This will be the perfect place knowing they’re so health conscious.”

For Dang, the investment in a healthier salon seems to be paying off. Visits to her salon have increased, and her business has become more profitable, she said.

But getting businesses to make changes voluntarily is a slow process. Of the more than 8,000 nail salons in California, only 120 have joined the collaborative so far.

“I think the ultimate root of the issue is that the chemicals are still in the products,” said collaborative co-founder Liou. “If we want to look at really how do we improve worker health, we also need the manufacturers to consider how they can they make safer products as well.”

Still, the Healthy Nail Salon Collaborative is making progress. The Environmental Protection Agency recently gave the collaborative a grant to help them offer microloans to salons wanting to upgrade.