Protesters rallied under the slogan “off our bodies” in cities across the United States on Tuesday, demanding abortion rights be protected after the leak of a draft Supreme Court opinion that would overturn the landmark 1973 Roe v. Wade decision.

Thousands of people turned out for an abortion-rights rally in New York City, one of the largest demonstrations as Americans awoke to political and social upheaval, months before voters go to the polls in congressional midterm elections.

“I hope it inspires people to show up in the midterms and vote, and that’s the one thing that I’m looking at as a positive,” Alaina Feehan, 41, a talent manager in New York City, told Reuters, calling the moment a “call to action.” M Sullivan yells as she holds a sign during a protest outside the U.S. Supreme Court, after the leak of a draft majority opinion written by Justice Samuel Alito preparing for a majority of the court to overturn the landmark Roe v. Wade abortion rights decision later this year, in Washington, U.S., May 3, 2022. REUTERS/Evelyn Hockstein

The Supreme Court itself became the epicenter for some of the earliest protests on both sides of the issue after the surprise publication of the 98-page draft ruling late on Monday by the news outlet Politico.

Demonstrators converged on the sidewalk just beyond the barricaded marble steps of the courthouse across from the U.S. Capitol, boisterously but peacefully voicing support for and opposition to ending a constitutional right to abortion nationwide.

Several dozen anti-abortion activists dominated the protests early in the day, beating on drums and chanting through megaphones: “Pro-choice is a lie, babies never choose to die,” and “Abortion is violence, abortion is oppression.”

Some knelt in prayer.

One man wearing a pink sweatshirt in support of Roe v. Wade tried in vain to tamp down the chants of an anti-Roe protester by holding his hand over her megaphone. 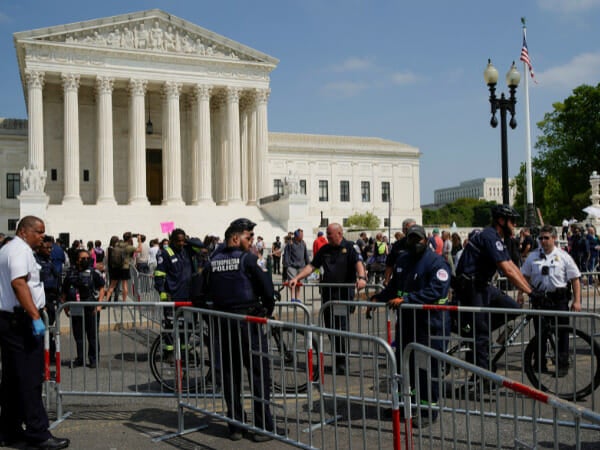 Police officers direct the setup of barricades outside the U.S. Supreme Court during a protest, after the leak of a draft majority opinion written by Justice Samuel Alito preparing for a majority of the court to overturn the landmark Roe v. Wade abortion rights decision later this year, in Washington, D.C., U.S., May 3, 2022. REUTERS/Elizabeth Frantz

Abortion rights advocates shouted back, “Off our bodies” and “abortion saves lives.” Others held signs reading, “Abortion is healthcare” and “Abortion is not a dirty word.” One sign displayed by a group identifying as Roman Catholics supporting abortion access said: “Thou shalt not steal my civil rights.”

By late afternoon, a larger and growing assembly of well over 1,000 abortion-rights protesters held sway, with about two dozen anti-abortion activists relegated to the sidelines, one of them yelling, “Abortion is murder” through a megaphone.

“I just feel that we’re going backward,” Jane Moore, 64, said of the prospect that Roe, which legalized abortion nationally nearly 50 years ago, could be struck down. “It actually breaks my heart and makes me angry at the same time.”

“It makes me very afraid. I feel very sorry for … young women. You’re starting all over again,” Paula Termini, 70, a nurse who has worked in delivery rooms and Planned Parenthood clinics, told Reuters outside the court. “It’s going to take a long time to get those gains back again.” 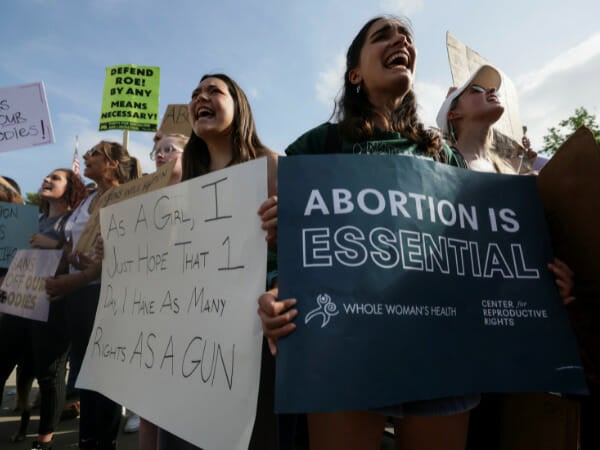 Demonstrators hold signs during a protest outside the U.S. Supreme Court, after the leak of a draft majority opinion written by Justice Samuel Alito preparing for a majority of the court to overturn the landmark Roe v. Wade abortion rights decision later this year, in Washington, U.S., May 3, 2022. REUTERS/Evelyn Hockstein

The protests in Washington were a prelude to rallies planned by abortion-rights advocates in cities across the country.

About 300 people gathered in downtown Atlanta just outside the city’s Centennial Olympic Park on Tuesday evening, their chants in support of abortion rights drowned out periodically by the din of honking horns from passing motorists.

“We will fight in these streets, we will fight in every street in America if we need to,” said 19-year-old Wendy Nevarez-Sanchez, holding a “Hands off my uterus” sign.

In the Los Angeles suburb of Pasadena, some protesters carried coat hangers, a grim reference to “back-alley” abortions that experts say could become common again in states where abortion is outlawed.

Perhaps the day’s largest rally emerged in New York City, where at least 2,000 abortion-rights protesters assembled in lower Manhattan’s Foley Square, waving signs with such slogans as “Bans Off Our Bodies” and “Abortion is Freedom.”

“I’m here standing up for my people. I’m here to say that reproductive justice is immigrant justice,” said Diana Moreno, 34, pointing to how low-income women and the undocumented would be disproportionately affected by the loss of abortion rights.

A handful of demonstrators around Foley Square waded into the street and briefly blocked traffic.

One of the more colorful acts of anti-abortion protest earlier in the day emerged in San Francisco, where a man calling himself the “Pro-Life Spiderman” scaled a downtown skyscraper while posting video footage of his climb on Instagram. Local news media reported that police took the man into custody.