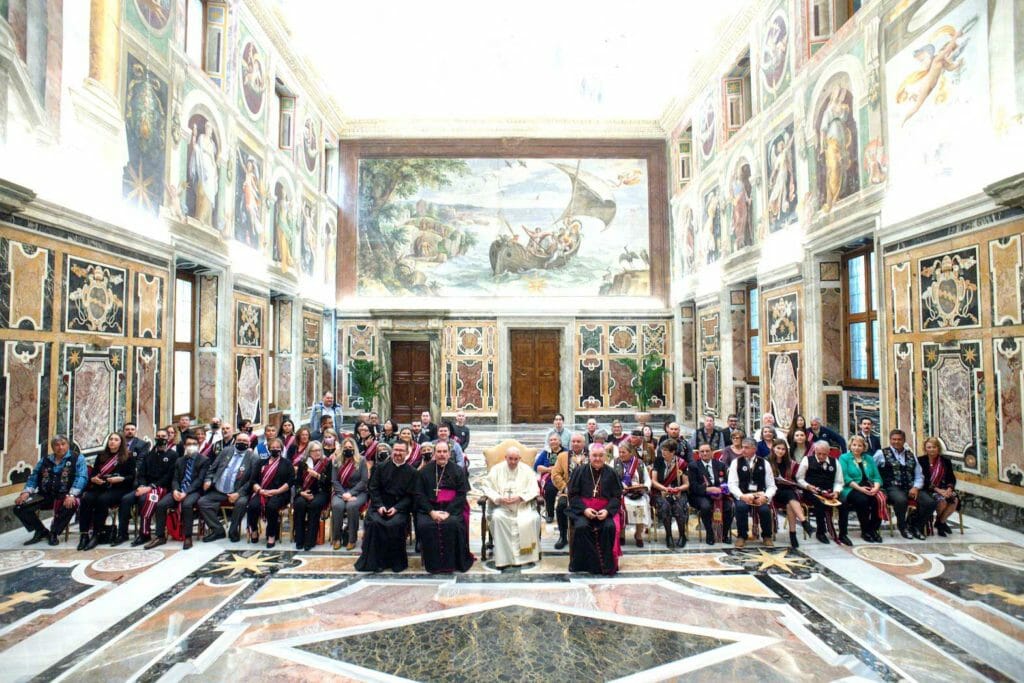 Delegates from the Manitoba Metis Federation pose for a group photo with Pope Francis during a meeting at the Vatican, April 21, 2022. Vatican Media/­Handout via REUTERS

VATICAN CITY – The group, also known as the Manitoba Métis, came to Rome separately from other Canadian delegations, who met the pope over a week of meetings ending on April 1, when he issued a historic apology.

“The tears that were shed in there, the stories that we exchanged back and forth, His Holiness accepted them with such grace and we were so touched when he asked, continued to ask, for the forgiveness from us,” said David Chartrand, president of the Manitoba Métis Federation.

“Our message was somewhat different than the messages of the others,” Chartrand reporters in St. Peter’s Square after their meeting, referring to the groups which came before.

“We were more on hope and revitalisation. We definitely thank the pope and accept his apology and we also spoke of reconciliation,” Chartrand said.

Francis is expected to visit Canada at the end of the July and apologise on indigenous land. The visit will last less than a week. Various indigenous groups want him to visit their areas but he will not be able to visit all of them.

Chartrand said he invited the pope to visit Manitoba province but “we will find him if he cannot come to the Red River … it will not stop us from continuing to believe in the Church and continue to support the Catholic Church in Canada”.

The homeland of the Red River Métis includes the Great Plains of Western Canada and the northern United States.

About 150,000 children were taken from their homes. Many were subjected to abuse, rape and malnutrition in what the Truth and Reconciliation Commission in 2015 called “cultural genocide”.

The stated aim of the schools, which operated between 1831 and 1996, was to assimilate indigenous children. They were run by Christian denominations on behalf of the government, most by the Catholic Church.