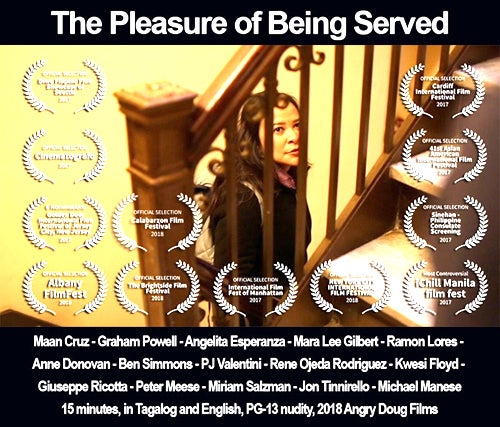 NEW YORK — Filipino American filmmaker Michael Manese’s short film “The Pleasure of Being Served” is on a roll having been selected by 12 film festivals so far, with the last three just within the last week.

Other notable selections include:

Manese’s short film introduces the character of Rosa, an undocumented immigrant who works for Hudson, a young American guy who is having a relationship with two women- a Filipina and an American woman.

In the process of getting to know these two women, Rosa gets caught between moral integrity and fulfilling her dream of giving her son a much better life. It’s an American movie about Filipinos.

MM plans to continue writing “Pleasure” as a feature length film with plans of raising funds and producing it. In the meantime, he continues to write ideas for shorts that would also have strong Filipino characters set in familiar American settings.

Born in the Philippines and raised in Passaic, New Jersey, Manese studied filmmaking at Rutgers University. He is a Web Project Manager by trade.