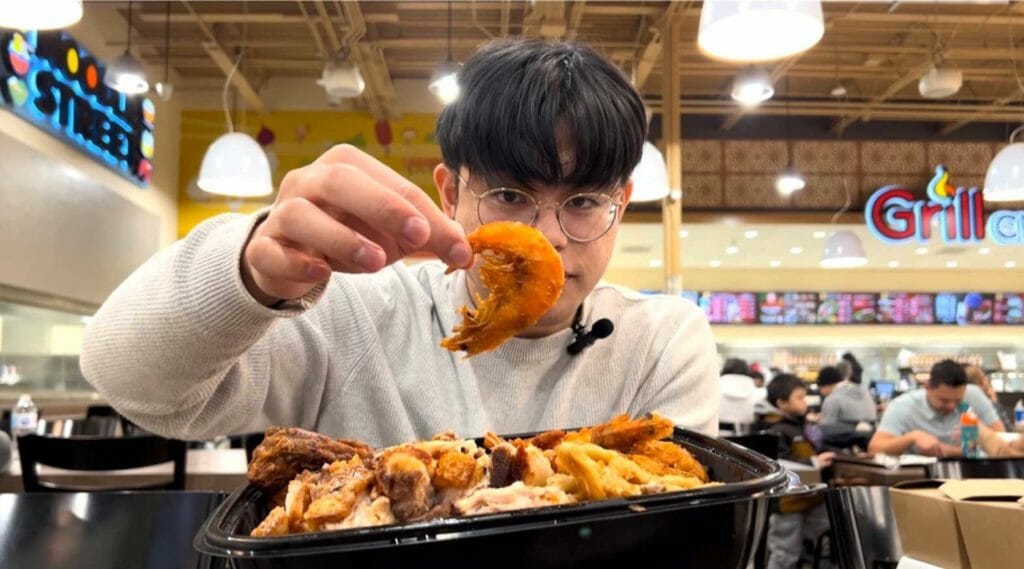 Among a new generation of video creators on TikTok, Ian Rivero, 21, stands out for his boyish looks, K-Pop vibe and flair in showcasing his Filipino background through cooking.

Rivero has over 1.1 million followers on the platform and over 200k combined following on Youtube, Instagram and Discord.

Rivero loves to cook and aims to make Filipino food more accessible and recognizable. With a bigger chunk of his audience based in North America, he wants to promote Filipino culture in general, especially to the younger TikTok generation.

Growing up in Canada

Rivero was born in Manila. His family moved to Saudi Arabia when he was three years old. His dad worked briefly in the Kingdom’s oil industry as a chemical engineer. An opportunity opened in 2005 for them to emigrate from Saudi to Canada.

His family settled in Alberta, the largest oil producing province of the country. Ian describes Alberta as multicultural with a big Filipino community of mostly immigrants and second-generation families of immigrants.

Growing up in Canada, he learned at an early age that being non-white made one an outsider of sorts, and that he must stick around with Filipinos. He had a phase when he was younger of being insecure about his own culture and heritage. 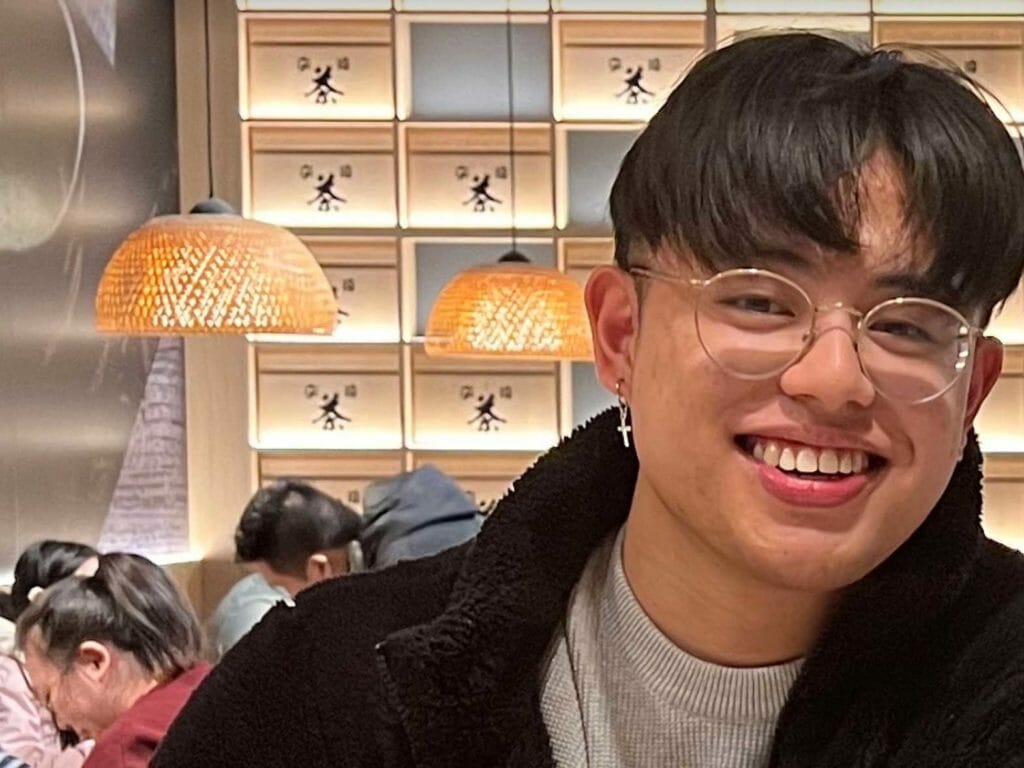 And although he loved eating sinigang and adobo, he would ask his mom not to pack Filipino food because he feared being scrutinized by kids in school. He always requested a sandwich so he could avoid being asked what’s the smell coming out of his lunch box.

“Kids don’t have filters. It is natural for children to have those comments at a young age,” he quipped. Towards his adolescent years, Ian got over that insecurity and stopped caring about what people think about the food he eats.

“Once I started appreciating myself that this is [being Filipino] something unique about me and I shouldn’t have to be accommodating to other people. I should not be hiding my food just because of how it may be judged. It is mine. It is unique to me, and I got to appreciate my culture better when I was about 15 or 16.”

Rivero now appreciates his cultural background more and the food back home. He is now more aware that Filipino culture is beautiful and unique.

While growing a massive TikTok following Rivero is also a full-time second year nursing student. His parents encouraged him to take the nursing route because of the perceived stability of a career in the medical field. But he also likes being empathetic and helpful to people and knows that he has the personality it takes to be a nurse.

At a young age, Ian was already passionate about cooking and started creating content on social media back in 2012. The first video he shared with his close friends was him cooking vegetables and steak. Before he started on TikTok at the start of the pandemic in March 2020, he was already posting food photos that he cooked on Instagram. His friends always gave positive feedback. His cooking videos came only a year later in 2021.

TikTok compared to Instagram, he says, is a discovery platform with a special algorithm that shows you videos that you want to see.

“Someone’s TikTok feed will not be the same feed like mine. On my feed, I see a lot of food and Filipino food because the algorithm knows what I want to see. For other people with different interests, they see different content. On TikTok, there’s more discoverability with the content that you want to push out, it’s seen by people who want to see it. If I post about Filipino food, there is more likely that Filipinos will see it.” 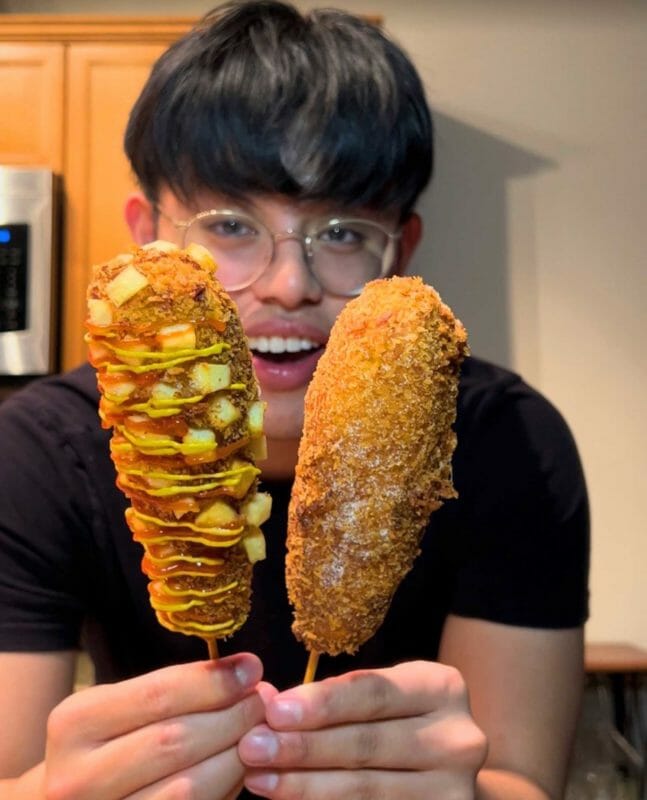 Ian Rivero cooks a lot of Asian food other than Filipino. He made these Korean Corn Dogs from scratch | CONTRIBUTED

His followers are 40% from the U.S. and around 20% from the Philippines. To supplement his engagement with his Filipino audience, he is on Discord, an online chat community where people can communicate over voice, video, and text. He also goes live on TikTok at about 2 or 3 a.m. on his time zone when is up late for schoolwork. That’s when everyone in the Philippines is awake, and he can connect to his Filipino audience. Ian would always get requests to speak Tagalog. He is learning the language.

Rivero tries to post content twice a week. If he gets busy with school, he tries to hold it off. “It’s hard to juggle because nursing is difficult, and you have to be in the hospital almost three times a week and it can get exhausting.”

For one video, he allocates six hours from the time he gathers ingredients, tests them out, edits, and does voice over until he posts the content. Prior to 2021, he was only making content for fun.

Last year, he took it seriously and added a more structural approach to creating content to reach more audiences. He networked with other food creators and got tips and ideas on how to grow his social media platforms in terms of scheduling and engaging with his followers.

The first Filipino food Rivero posted on TikTok was champorado and it has now amassed over 162k likes and 700k views. His favorite Filipino dessert is biko,and he is still learning to perfect his own recipe.

Although he makes a decent amount of money for having millions of followers on TikTok, he still considers making videos a part time job.

“TikTok is a fairly new platform and there’s not a way yet to monetize from views like YouTube. There’s a creators’ program but there’s not a lot of money there. The best way to make money is sponsorships. Most brands and businesses still take Instagram more seriously. You need to branch out, it’s more of exposure being on TikTok this time.”

His plan is to finish nursing and perhaps become a part-time nurse.” He plans to venture out on YouTube and create long form videos.

“First, build a community of people. Instead of focusing on how many followers you have, it is crucial to see their engagement on your content. Branch out to different kinds of social media because you will never know when those platforms are going to go away. In terms of being unique to other creators, it comes with time.”