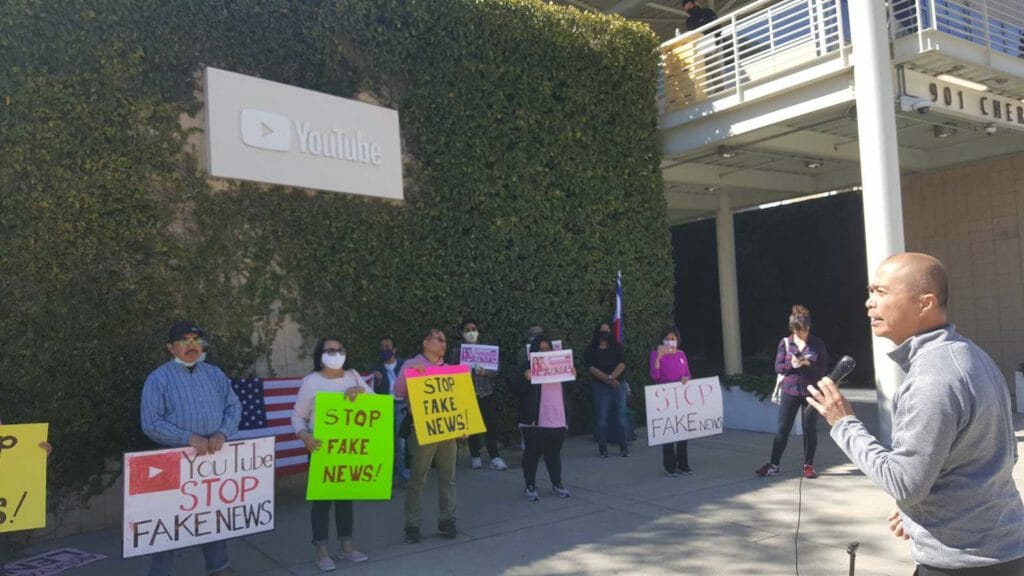 FAHRA’S Ago Pedalizo (extreme right) urges rally participants to continue protesting against fake news and disinformation being propagated with the use of legitimate platforms like YouTube, Facebook and Google. INQUIRER/Jun Nucum

SAN FRANCISCO – Tech giant YouTube urged protesters to send videos they regard as fake news or information, particularly on the coming Philippine presidential election in May, so these may be flagged for possible suspension or total removal from the platform if warranted.

FAHRA’S Donny de Leon initially sent an email to YouTube about  the  impending protest to demand that the platform act against the spread of disinformation and fake news and also to open lines of communication with the protesters.

“What we are asking is for Google, YouTube to suspend more pro-Marcos accounts that are spreading disinformation, to bolster fact-checking and content moderating, adjust search algorithms, and stop selling ads for disinformation purveyors,” wrote de Leon in the email.

In response to de Leon, a spokesman from YouTube’s Community Outreach Team encouraged de Leon and the MAD group to  send “a list of videos that you would like to flag” to YouTube specialists for appropriate review.

YouTube’s response to de Leon also stated that from February 2021 to January 2022, YouTube removed over 400,000 videos uploaded from the Philippines for violating their  Community Guidelines including that on election misinformation policies prohibiting content that mislead voters, advance false claim, encourage others to interfere with democratic processes and contain hacked information, among others.

“I strongly encourage you to use our reporting tools to immediately flag the content you believe is violative and you can do by replying directly to this email,” concluded the spokesman.

In an earlier virtual press event, YouTube vice president for Product Management Emily Moxley stated that “in political conversations, one person’s misinformation is often another person’s deeply held belief. This is where the work of my team comes in, we work on ‘raise’ and ‘reduce.”

“Political news and events can be subject to misinformation, so the availability of authoritative information sources is crucial. Over the last few years, we’ve made deep investments to make YouTube a more reliable source for news, while also maintaining the openness of the platform,” explained Moxley.

Speaking through News Lab lead for APAC, Irene Jay Liu mentioned that Google has invested in #FactFirstPH and even asked the University of the Philippines to develop an election workshop series for journalists.

Liu also urged news outfits to apply for the use of Project Shield, a program developed by Jigsaw and Google that offers free protection from distributed denial of service (DDoS) attacks, against phishing, block malware and prevent fraudulent access to data,

“We know journalists are the target of online attacks because what you do is important in disseminating information during the election…This is a program that allows you to have the extra layer of security,” Liu empathized.

Asked they planned next, FAHRA’s Ago Pedalizo announced that the next l pink caravan may be converted to a rally at Facebook.

“Fake news have spiked up again. Marcos feels the threat. So we need to ramp up anti fake news campaign in San Francisco with a protest dubbed Rally to Stop Fake News and Disinformation on noontime of Saturday, April 2, 2022, at Facebook (Meta) Headquarters, One Hacker Way, Menlo Park, California,” Pedalizo shared.