International outrage over Russia’s invasion of Ukraine grew on Thursday as U.S. and Ukrainian officials said civilians waiting in line for bread and sheltering in a theatre had been killed by Russian forces.

U.S. President Joe Biden called Russian leader Vladimir Putin a war criminal in comments the Kremlin said were “unforgivable” as it insisted the war in Ukraine was “going to plan” amid talk of compromise at peace talks.

Moscow has yet to capture any of Ukraine’s biggest cities despite the largest assault on a European state since World War Two. More than 3 million Ukrainians have fled and thousands have died as the war enters its fourth week.

Ukraine’s foreign ministry said Russian forces dropped a powerful bomb on a theatre in the besieged southern port city of Mariupol, leaving many civilians trapped and an unknown number of casualties. Reuters could not independently verify the information. 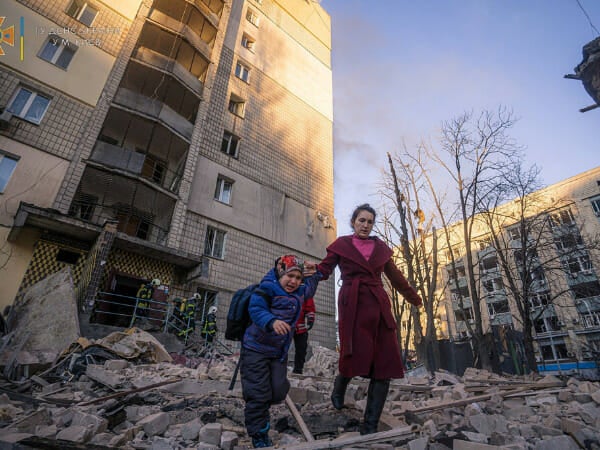 A woman with a child evacuates from a residential building damaged by shelling, as Russia’s attack on Ukraine continues, in Kyiv, Ukraine, in this handout picture released March 16, 2022. Press service of the State Emergency Service of Ukraine/Handout via REUTERS

Maxar Technologies, a private U.S. company, distributed satellite imagery it said was collected on March 14 and showed the word “children” in large Russian script painted on the ground outside the red-roofed building.

The theatre had been housing at least 500 civilians, according to Human Rights Watch.

“This raises serious concerns about what the intended target was in a city where civilians have already been under siege for days and telecommunications, power, water, and heating have been almost completely cut off,” Belkis Wille from the rights group said. 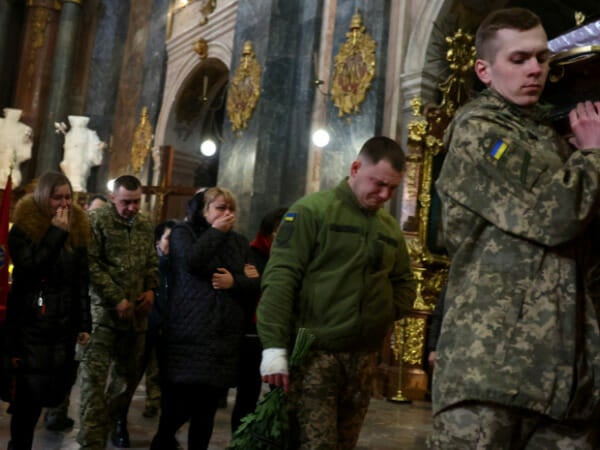 Family members and comrades mourn the death of Eduard Niezhenets, who was killed in a rocket attack against a military base in Yavoriv during the ongoing Russian invasion, during his memorial service at the Saints Peter and Paul Garrison Church in Lviv, Ukraine, March 16, 2022. REUTERS/Kai Pfaffenbach

The U.S. Embassy in Kyiv said Russian forces had shot dead 10 people waiting in line for bread in Chernihiv, northeast of Kyiv. Russia denied the attack and said the incident was a hoax.

The United Nations’ top court for disputes between states ordered Russia on Wednesday to immediately halt its military operations in Ukraine, saying it was “profoundly concerned” by Moscow’s use of force.

There were signs of compromise and progress at ongoing talks between Russia and Ukraine.

The Kremlin said negotiators were discussing a status for Ukraine similar to that of Austria or Sweden, both members of the European Union that are outside the NATO military alliance. 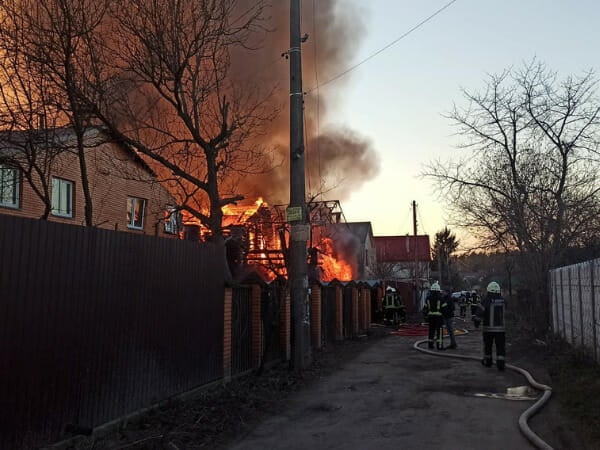 Firefighters work at residential buildings damaged by shelling, as Russia’s invasion of Ukraine continues, in Kyiv, Ukraine, in this handout picture obtained by Reuters on March 16, 2022. Press service of the State Emergency Service of Ukraine/Handout via REUTERS

“Neutral status is now being seriously discussed along, of course, with security guarantees,” Russian Foreign Minister Sergei Lavrov said. “There are absolutely specific formulations which in my view are close to agreement.”

Vladimir Medinsky, Russia’s chief negotiator, told state TV: “Ukraine is offering an Austrian or Swedish version of a neutral demilitarised state, but at the same time a state with its own army and navy.”

Austria and Sweden, the biggest of six EU members outside NATO, both have small militaries that cooperate with the alliance.

President Volodymyr Zelenskiy has said Ukraine could accept international security guarantees that stopped short of its longstanding aim to join NATO. That prospect has been one of Russia’s primary concerns.

“My priorities during the negotiations are absolutely clear: the end of the war, guarantees of security, sovereignty, restoration of territorial integrity, real guarantees for our country, real protection for our country,” Zelenskiy said in a video address released early on Thursday.

In a speech on Wednesday to the U.S. Congress by video link, Zelenskiy repeated a request for a no-fly zone over Ukraine, something the West won’t introduce.

“In the darkest time for our country, for the whole of Europe, I call on you to do more,” he said.

Is the possibility of world war 3 near?

The United States announced an additional $800 million in security assistance to Ukraine to fight Russia, with the new package including drones, anti-armor and anti-aircraft systems.

“More will be coming as we source additional stocks of equipment that … we are ready to transfer,” Biden said, later condemning Putin.

“He is a war criminal,” he told reporters.

The U.N. Security Council is due to vote on Friday on a Russian-drafted call for aid access and civilian protection, but diplomats say the measure is set to fail because it does not push for an end to the fighting or withdrawal of troops.