The stand-up comic and the madman

The stand-up comic and the madman 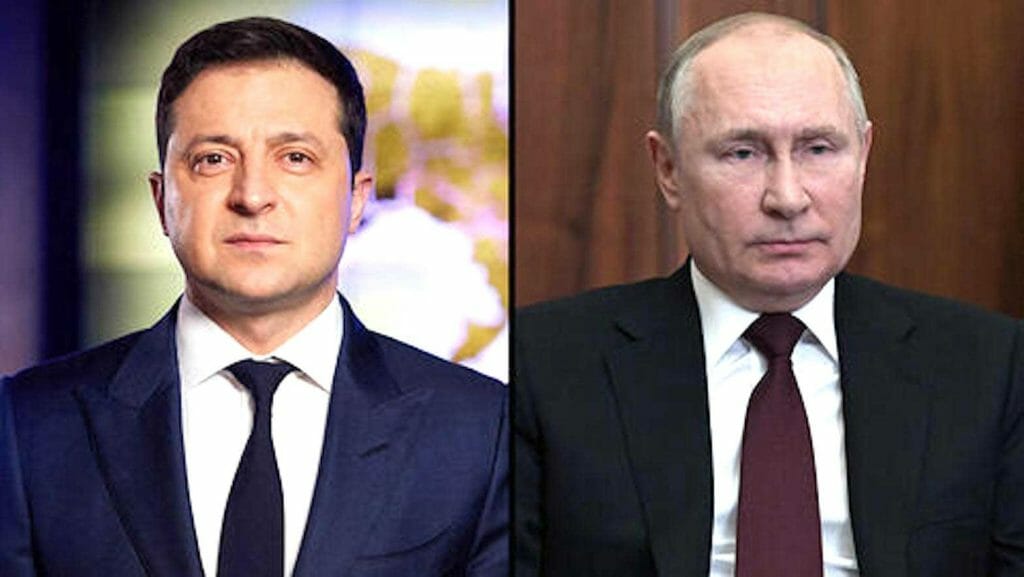 And now, Hamlet the Prince versus the Evil Uncle.

In his video speech to the British Parliament last week, President Zelensky said in Ukrainian, “The question for us now is to be or not to be. This is the Shakespearean question. For 13 days, this question could have been asked. But now I can give you a definitive answer. It’s definitely yes, to be.”

Indeed, under his leadership, Ukraine has been heroically bearing the slings and arrows of the Moscow Madman.

Thus is the morality play being enacted in the ongoing war perpetrated by Russia’s Putin against the sovereign state of Ukraine. Most countries have condemned this invasion, this unprovoked “military operation,” the term mandated by (Ras)Putin. To use the word “war” is strictly forbidden—Nyet!—by Moscow under pain of imprisonment . The Muscovite has no argument with his or her counterpart in Kviv. And vice versa.

It’s abundantly clear that Russians are mostly opposed to this invasion of a neighboring country wherein they have family, and have taken to the streets, despite the risk, to protest the war. For it is war and it is unarguably Putin’s war.

Nor is it difficult to take sides in this war. The invasion of Ukraine must be condemned categorically. Putin is an egotistical maniac, with delusions of grandeur, a man described witheringly by an astute observer, as a five-foot-six individual who thinks he is five-foot-seven.

His dwarfish moral stature is further dwarfed by Zelensky’s standing in the eyes of Ukrainians and the world. His defiance of the Kremlin, his refusal to accept the offer of the United States to take him and his family to safety, his resoluteness and calm demeanor, his impassioned appeals to the West—all have elevated him to Churchillian heights. The neophyte politician, entertainer, and former stand-up comedian has outmaneuvered the skilled ex-KGB operative in the public arena.

Frustrated and stymied by the fierce resistance they are encountering, the Russian military has started to bombard civilian neighborhoods, even as noncombatants try to flee their beleaguered towns and cities. A homicidal strategy it employed in Syria against rebel-held strongholds, alongside Syria’s military.

And yet, despite the Nyets!, despite the clarity of a morality play, the West has its own guilty burden—still the White Man’s Burden but this time one of acknowledging responsibility for eagerly acquiescing to Rudyard Kipling’s 1899 imperative, that the United States, and by implication, the Western colonial powers, take upon themselves the burden of civilizing the half-sullen devil children of the Philippines. A grand excuse for taking over a newly emergent republic, a completely unjustified enterprise that saw the rise of the anti-imperialist movement in the US.

Along with taking possession of the archipelago, the US overthrew the Hawaiian monarchy, enfolded Puerto Rico within its territorial hegemony, and controlled the government in Havana until 1959, when Fidel Castro overthrew it. His realignment of Cuba with the Soviet Union  was a considerable thorn in Uncle Sam’s side, leading to the missile crisis in 1962.

Prior to that, the US had deployed ballistic missiles in Italy and Turkey, within striking distance of the Soviet Union. This led to Cuba’s invitation to the Soviet Union  to base nuclear missiles on the island. Khruschev agreed. Thus begun the construction of missile launch sites, and the ramping up of tension between the two superpowers. At one point Washington considered an air strike on the launch sites and a ground invasion but President John F. Kennedy decided against an open declaration of war. He must surely have had in mind the Bay of Pigs debacle the year before, when over 1,400 CIA-funded anti-Castro paramilitaries landed on a beach in the Bay of Pigs but after two days of fighting were soundly defeated and taken prisoner.

The parallels between then and now are striking, with the roles reversed—Russia complaining of NATO’s encirclement endangering its security. Europe and the US coming to the defense of Ukraine, short of directly confronting the Russians, is praiseworthy and necessary, but please, we can do without the high-sounding rhetoric, given their own land-grabbing imperialist histories and unprovoked wars.