Carlos Villa: America is in his art

Carlos Villa: America is in his art 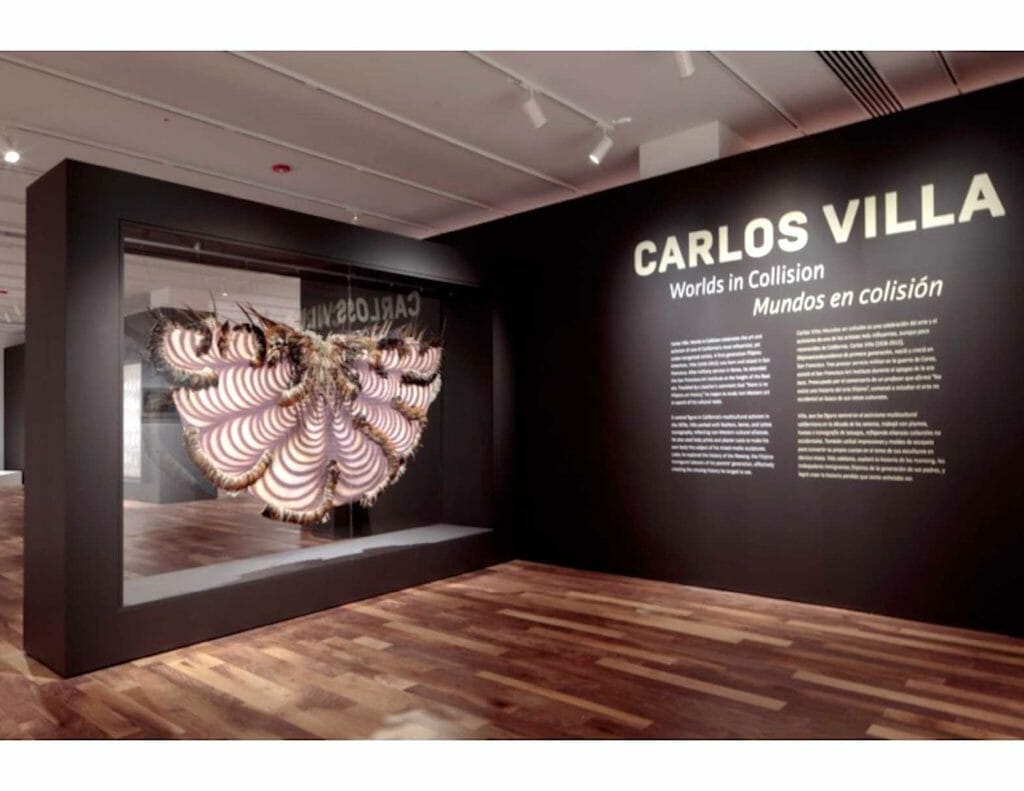 Carlos Villa: Worlds in Collision will be at the Newark Art Museum until May 8. NAM

NEW YORK – There is a terrific, not-to-be-missed retrospective at the Newark Museum of Art, of 35 rarely seen works by the late Filipino-American artist Carlos Villa, titled Carlos Villa: Worlds In Collision. Organized by The Asian Art Museum of San Francisco and the San Francisco Art Institute, this major exhibition showcases the depth and range of Villa’s art: large-scale, mixed media paintings and cloaks, along with works that include photography, body casts, and body paintings.

Born and raised in San Francisco by immigrant parents from the Ilocos region, Villa was not only an artist but a beloved teacher and community activist as well, heir to the activist legacies of the manong, the avuncular mostly male pioneers of the diaspora in the US.  And he figured prominently in leading the charge for multiculturalism, not as a gimmick but because of who he was and whence he originated. Being a contributor to the catalogue, I participated recently in a Rutgers University-sponsored webinar on Villa. Here I include my remarks, edited for clarity and brevity.

Villa approached multiculturalism, not only as a citizen of this country with roots in the Philippines, but as a global citizen. He once said that most people think that “whenever we discuss multicultural issues, it is just about colored-people stuff, that what we discuss does not include all people—as if we don’t all live on the same planet.”

To be a multicultural was to be himself, and to be himself was to be multicultural. Multiculturalism was his wide road to the interior, to paraphrase Basho. It was to discover what he had inside of him, and in the communal life of a Filipino-American surrounded by family and kin and especially the manong. It was to explore the layers of the colonial currents that not only brought his parents to these shores but that they themselves carried. Maybe the only advantage of a subject whose historical, social, and political context is suffused with the ghosts of colonialism is to have multiple identities rolled into one, leading to a facility in code switching.

Thus Carlos’s sole trip to the archipelago and to his parents’ region was an eye-opener. He heard a multifaceted language, Tagalog, Ilocano, English, Spanish, and Chinese all cohabiting peacefully. He loved these “border crossings” as he termed the polyglot stew, the creolization.

Of his work he said that “I have always striven for a gumbo, for a creolization of aesthetics in my own work.”

A culinary mélange, gumbo has a Filipino counterpart in halo-halo, literally, “mix-mix,”  the favorite Filipino dessert, which  consists of layers of preserved fruit, beans, coconut spore or macapuno, custard, crushed ice, topped with a scoop of ube (purple yam) ice cream, and with a  pour of evaporated milk. The confection, served in a tall glass, is mixed thoroughly (thus halo-halo) before being consumed.  The commingled flavors give rise to a distinct, delicious, refreshing hybrid taste.

By virtue of their halo-halo history, Filipinos and Filipino-Americans are instinctively multicultural; it is a natural condition–they just need to let it play out. Which is exactly what Carlos did, what he had done all along as a Filipino-American artist, both at home, and as part of the largely immigrant, multicultural milieu of San Francisco.

And of course in his art it was only natural that he crossed borders all the time: And one of those borders he crossed over was into poetry. One poetic form that particularly appealed to him was the pantoum, of Malaysian origin.  The pantoum relies on the repetition of certain words and phrases, so that meanings gradually shift as each iteration reveals a new dimension but one organically springing from what came before, creating both a circularity and an open-endedness that is a pretty good definition of Villa’s sense of multiculturalism.

His explorations brought about unexpected affinities and resonances. His Campo Santo installation, for instance, (not included in this retrospective), with its inscribed brass plates hanging from trees in a forest reminded me of the ambahan, a traditional poetic form of the Hanuno Mangyan of Mindoro Island, inscribed on bamboo slats or on actual bamboo trees. The ambahan has seven-syllable lines meant to be sung, and expressive of the situation or characteristics of the poet.

Villa may or may not have been aware of the ambahan but I have no doubt he would have loved it. Perhaps Villa’s inscriptions on brass plates sprung from some deep ancestral memory.

The poetics of multiculturalism was essentially Carlos’s way of seeing himself—what he was and how he came to be—and the milieu he grew up in. And he situates his multiculturalism in an America that is expansive, inclusive, the America of Walt Whitman, where each one of us, if we would only open our eyes and hearts, contains multitudes. It is an imagined community that decades earlier manong Carlos Bulosan in his classic America Is in the Heart realizes is attainable only if we all—black, brown, white, yellow, red—pitch in. For Carlos Bulosan, writing was his key to unlocking the door to America.

And for Carlos Villa, art was his key to unlocking the America of E Pluribus Unum. Out of the Many, One.

Carlos Villa: Worlds in Collision is up until May 8.