U.S. stocks ended sharply higher on Thursday, led by a 3% gain in the Nasdaq, in a dramatic market reversal as U.S. President Joe Biden unveiled harsh new sanctions against Russia after Moscow began an all-out invasion of Ukraine.

The S&P 500 rose more than 1%, ending a four-day slide amid worries over the escalating crisis. The Dow also ended in positive territory.

After consulting counterparts from the Group of Seven nations, Biden announced measures to impede Russia’s ability to do business in the world’s major currencies, along with sanctions against banks and state-owned enterprises.

The White House has warned Americans that the conflict could lead to higher fuel prices in the United States, but U.S. officials have been working with counterparts in other countries on a combined release of additional oil from global strategic crude reserves. 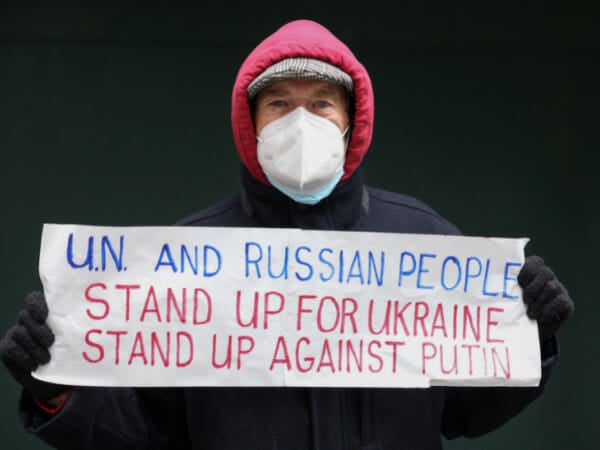 Bill Johnson, who said he chose to stand across from the New York Stock Exchange on Wall Street because, “the attacks put us all at risk, and if people can’t find some way to express their outrage for Ukraine, we are all at a loss”, in New York City, in New York, U.S., February 24, 2022. REUTERS/Caitlin Ochs

All three major indexes sold off early in the day on news of Russia’s invasion of Ukraine, with the Nasdaq down more than 3% at the open. They hit session highs in the wake of Biden’s comments and rallied heading into the close.

“The tough stand the U.S. and Europe is taking is sending a loud message to the financial markets that they’re going to try to cripple as much as they can the Russian economy,” said Peter Cardillo, chief market economist at Spartan Capital Securities in New York.

“From one perspective that’s positive,” he said, adding that the selling in the market may not be over. “Going forward, we’re still subject to probably higher oil prices, probably higher commodity prices.”

Investors have been worried about how increasing inflation will affect the outlook for the Federal Reserve and higher interest rates. 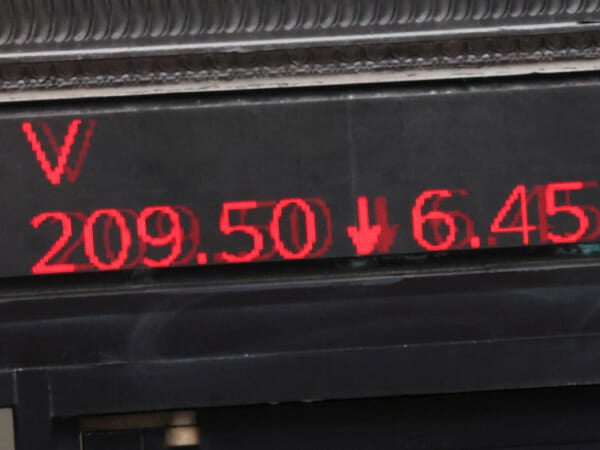 Ukrainian forces battled Russian invaders on three sides on Thursday after Moscow mounted an assault by land, sea and air in the biggest attack on a European state since World War Two.

The information technology sector rose 3.5% and gave the S&P 500 its biggest boost, in a reversal from recent action.

Early in the session, the Nasdaq was down more than 20% from its November closing record high. If it had closed at that level, it would have confirmed it was in a bear market.

“Tech had the most technical damage, so it’s good to see tech pick up the pieces,” said Jamie Cox, managing partner of Harris Financial Group in Richmond, Virginia.

The S&P 500 earlier this week confirmed that it was in a correction. A correction is confirmed when an index closes 10% or more below its record closing level.

“You had a lot of the uncertainty priced in to the market,” said Keith Lerner, co-chief investment officer at Truist Advisory Services in Atlanta.

Advancing issues outnumbered declining ones on the NYSE by a 1.14-to-1 ratio; on Nasdaq, a 1.53-to-1 ratio favored advancers.

Volume on U.S. exchanges was 17.52 billion shares, compared with the 12.1 billion average for the full session over the last 20 trading days.