WWII: A Philippine government in exile

WWII: A Philippine government in exile 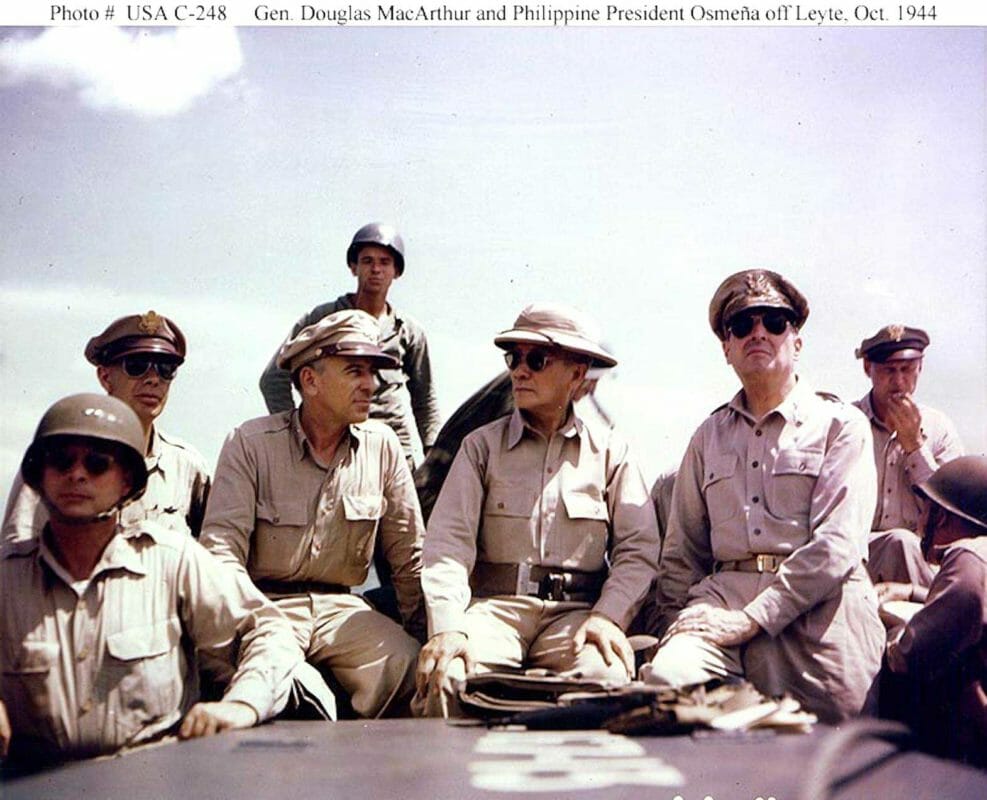 In this World War II photograph President Sergio Osmena (second from right)  is seated close to General Douglas MacArthur (right) during the landing in Leyte.

The Japanese Imperial Army’s invasion of the Philippines in December 1941 created a major military problem for the American and Filipino army and navy. Within a short time, the invasion became a crisis on the island of Luzon. A high-level decision was made to declare Manila an “Open City” to prevent needless death and destruction.

During this time, there was also a crisis for the Philippine Commonwealth government. The United States Congress had passed the Tydings-McDuffie Act in 1934, which detailed the steps for eventual Philippine independence. The legislation provided United States assistance during a ten-year transition period for Philippine independence. The act required an election for president and other vital positions in the Commonwealth government. The date of independence was scheduled for July 4, 1946.

The first President of the Philippine Commonwealth was Manual Quezon. He had worked diligently for several years with Americans General Douglas MacArthur and High Commissioner Francis Sayre, Sr. on developing an independent military and civilian government. At the time of the Japanese invasion, President Quezon was in Baguio receiving treatment for his chronic tuberculosis. Once he received the troubling news of the invasion, he quickly returned to Manila.

Quezon and his family had to endure dangerous conditions on Corregidor and remained on the island until February 20, 1942. A United States submarine named the USS Swordfish was tasked to evacuate the President, his family, and other key members of the Commonwealth government.

The destination of the submarine was Iloilo. The Japanese forces had not yet invaded the island. From Iloilo, the important party boarded a ship called the Princess of Negros and proceeded to Negros Oriental. Finally, the group made it to Del Monte in Mindanao. At this point in the evacuation, the party boarded a Flying Fortress airplane for Australia. Once the plane took off from the runway, the Philippine Commonwealth government was exiled outside the territory of the Philippines.

Once the government in exile reached Melbourne, Australia, there was initial equivocation on where the Commonwealth should establish its new capital. Melbourne was geographically closer to the Philippines, but Washington, D.C. had the power and resources needed to defeat the Japanese. A decision was made to establish a temporary capital in Washington. The primary mission of the government in exile was advocacy for Philippine interests.

President Quezon, his family, and other members of the government boarded a ship, named the President Coolidge, and headed for San Francisco. They arrived in San Francisco on May 8, 1942. President Roosevelt of the United States provided his special train to the party, and they traveled by rail to Washington, D.C.  They arrived in Washington on May 13, 1942. They were greeted enthusiastically by Roosevelt and his wife, Eleanor. Quezon and his family spent the night as guests at the White House.

Shortly, the Commonwealth government established an office in the U.S. capital. They regularly sent shortwave radio broadcasts to the Philippines. Unfortunately, Quezon continued to suffer from tuberculosis. He was a patient at a leading tuberculosis sanitarium in Saranac Lake in Upstate New York. He eventually succumbed to the disease on August 1, 1944, while receiving treatment at Saranac Lake. His remains were initially buried at Arlington National Cemetery in the Washington area. After the liberation of the Philippines, his remains were returned to his homeland.

The Vice President of the Commonwealth, Sergio Osmena, was inaugurated President after the death of Manual Quezon. The succession was held in Washington, D.C.  Soon, President Osmena headed to the Pacific Theater for the return to the Philippines. The landing of American forces was scheduled for October 20, 1944, at Leyte. In the iconic World War II photograph of the wading ashore at Leyte, President Osmena was positioned close to General Douglas MacArthur.

Although World War II was a major impediment for the ten-year transition to independence, the United States still granted independence to the Philippines on the original timetable. The new republic was dedicated on July 4, 1946. Manual Roxas was inaugurated the first president of the Republic of the Philippines. President Roxas had defeated Sergio Osmena in earlier elections.