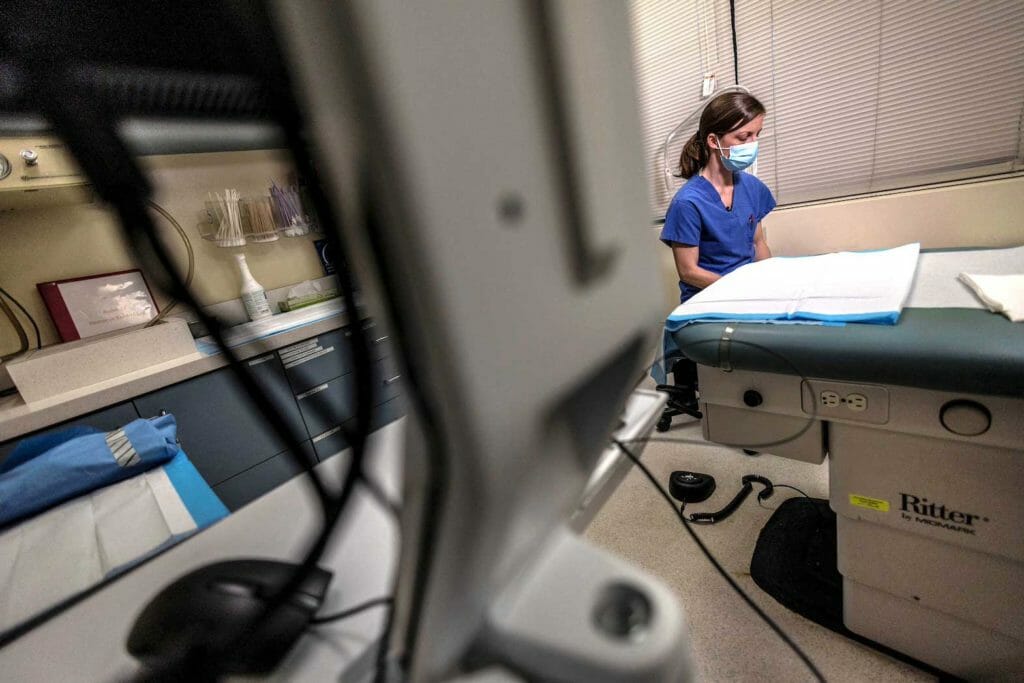 Planned Parenthood Dr. Jessica Hamilton is seen inside a consultation room at the health center in Sacramento, as California abortion providers are preparing for an influx of patients from other states, if the U.S. Supreme Court overturns the landmark Roe vs. Wade case, in California, U.S. February 1, 2022. REUTERS/Carlos Barria

SACRAMENTO – Abortion providers in liberal states are expanding clinics, training more staff and boosting travel assistance to prepare for an influx of patients from conservative states if the U.S. Supreme Court ends the constitutional right to the procedure.

Planned Parenthood is enlarging several clinics in California and has purchased land to build a bigger clinic in Reno, Nevada. In Illinois, abortion providers have set up a logistics center to help make medical care arrangements for women from states where abortion is expected to be restricted.

Clinic operators said they were also increasing services in Minnesota, New York and Virginia ahead of a Supreme Court decision expected by early summer. Many court watchers believe the six-justice conservative majority will weaken or overturn Roe v. Wade decision that made abortion legal nationwide.

The court’s ruling could dramatically curtail abortion access in the United States, where the issue remains politically divisive despite public polling showing a majority of Americans believe the procedure should be legal in all or most cases.

A decision to overturn Roe would trigger laws ending the right to an abortion in 26 states, mostly in the Midwest, South and parts of the West. It would also embolden abortion opponents to seek restrictions in states where it remains legal.

“We are getting ready for this post-Roe world and getting ready to continue to be the safety net for patients from all over the country,” said Dr. Jessica Hamilton, associate medical director for abortion services for a Planned Parenthood chapter that covers much of California and Nevada.

California Governor Gavin Newsom has pledged the state will be a “sanctuary” for U.S. women seeking abortions. Yet divisive politics have complicated efforts to protect and expand access, even in this and other heavily Democratic states.

Since the city’s planning commission approved a larger site for the clinic in December, abortion opponents have called for protesters to speak out against the project when the city council considers it at a meeting next month.

The address of the planned site for a new clinic in Reno has not been released for security and safety reasons, a Planned Parenthood spokeswoman said.

Should Roe get overturned or weakened, anti-abortion advocates said they expect to see increased activism around the issue in all 50 states.

“You’re going to see both sides doing whatever they can,” said Carol Tobias, president of National Right to Life, an anti-abortion organization.

Last year, states passed 10 times more restrictions on abortions than protections, according to the Guttmacher Institute, a reproductive rights research and policy organization.

“There’s real stigma around abortion across the country, even in progressive spaces,” said Elizabeth Nash, a state policy expert at Guttmacher. With Roe as settled law, many politicians on the left have not grappled with abortion as part of their routine work for nearly 50 years, she said.

Abortion providers got a preview of a post-Roe landscape last year when Texas enacted the country’s strictest anti-abortion law, banning the procedure after about six weeks.

Clinics in states including California, Illinois, New Mexico and Oklahoma experienced a surge in patients from Texas, abortion providers said.

Last month, in cooperation with a private clinic, McNicholas’ group opened a logistics center in Illinois aimed at helping women from Texas and other states travel to obtain abortions.

To obtain the pills, however, women must provide a New Mexico address where the medication can be mailed and undergo a video exam from a New Mexico location.

“Texas is having a dress rehearsal for what we can expect across the country as Roe is either overturned or further chipped away at,” Hagstrom Miller said.