“My friends, this is what voter suppression looks like,” Democrat Dana DeBeauvoir, the Travis County clerk, told reporters on Tuesday.

Lawmakers in Texas approved a raft of voting restrictions last year, one of many efforts in Republican-controlled states to pass new limits after former President Donald Trump falsely claimed he lost the 2020 election because of widespread fraud. 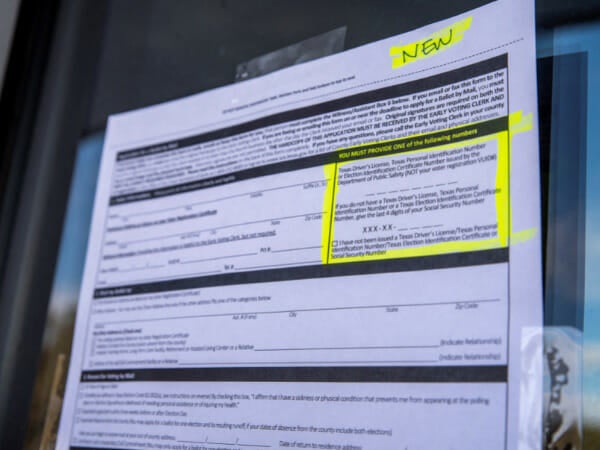 An example of a new mail in ballot request form sits on display as Travis County Clerk Dana DeBeauvoir speaks to the media after Travis County election officials said that due to Texas’ new voting law SB1, half of vote-by-mail applications for March primaries had been rejected, in Austin, Texas, U.S. January 18, 2022. REUTERS/Sergio Flores

Democrats in Congress this week renewed their push to pass sweeping voting rights legislation that would overturn limits such as the Texas law, but the effort appears doomed in the face of united Republican opposition.

The Texas bill prompted some Democratic legislators to flee the state for weeks to prevent the state House of Representatives from having the quorum necessary to pass it, though they eventually relented.

Republican Texas Governor Greg Abbott, who signed the bill in September and is seeking re-election this year, has said the law, known as Senate Bill 1, will increase public trust in elections. 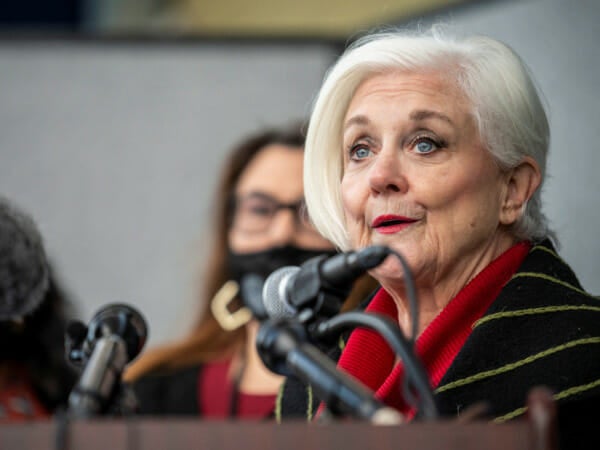 Travis County Clerk Dana DeBeauvoir speaks to the media after Travis County election officials said that due to Texas’ new voting law SB1, half of vote-by-mail applications for March primaries had been rejected, in Austin, Texas, U.S. January 18, 2022. REUTERS/Sergio Flores

The U.S. Justice Department has sued Texas over the legislation, saying it disenfranchises voters. Democrats say such restrictions discriminate against Black voters and other minorities who traditionally support Democratic candidates.

Among other provisions, the law requires voters applying for a mail ballot to provide either a driver’s license or Social Security number, which must match the number they gave when first registering to vote.

That leaves some voters playing a “guessing game,” DeBeauvoir said, because many people cannot recall which number they provided originally and there is no easy way for voters to check.

Harris County, which includes Houston, had rejected 409 out of 1,373 applications as of last Friday for ID problems, including 309 missing ID numbers and 173 with numbers that did not match those on file, according to Leah Shah, a spokesperson for the county elections office. 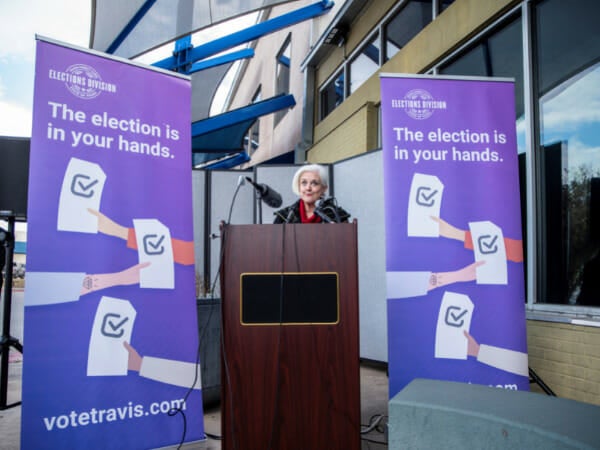 Travis County Clerk Dana DeBeauvoir speaks to the media after Travis County election officials said that due to Texas’ new voting law SB1, half of vote-by-mail applications for March primaries had been rejected, in Austin, Texas, U.S. January 18, 2022. REUTERS/Sergio Flores

In Bexar County, home to San Antonio, officials had processed more than 300 rejections through last week out of some 1,200 applications, elections administrator Jacquelyn Callanen said in a phone interview. Around 80% of those were due to the new ID requirements.

Other provisions in the law are also creating obstacles, she said. The office previously added a sticker with voters’ addresses to applications that were mailed out to save them a step, but that is no longer permitted, Callanen said.

The law also prohibits residents from obtaining applications for other people, including relatives. Callanen said her office regularly receives messages from senior citizens asking for ballots for themselves and their spouses; under the law, spouses must make their own separate requests.

“It’s sort of thwarting us at every turn,” she said.

Mail ballots in Texas are already sharply limited to a handful of categories, including residents 65 years and older, disabled residents or voters who will be absent from their county during early voting and Election Day.

DeBeauvoir said Secretary of State John Scott’s office had failed to give local officials enough guidance on how to help voters cure any defects.

In response, Sam Taylor, a spokesperson for Scott’s office, said state officials reached out to Travis County last week to advise staff on the proper process and noted that the county’s own estimated rejection rate went down from 50% to 27% following that guidance.

He said clerks have been instructed to accept applications in which voters have included both their license and Social Security number, as long as one of them matches what is on file.