Hope amid the rubble: Kentucky tornado death toll could drop I Headlines

Hope amid the rubble: Kentucky tornado death toll could drop

A ray of hope emerged on Sunday from the aftermath of a barrage of tornadoes that obliterated a Kentucky town and killed people in five states, as representatives of a candle factory destroyed in the disaster said far fewer people may have died than previously feared.

Officials had said the death toll could soar past 100 from twisters that tore through at least six states in the U.S. Midwest and South on Friday night, while seeing little chance of finding survivors in the rubble two days later.

In Kentucky, Governor Andy Beshear estimated the death toll at 80 and said it was certain to rise above 100, but that was based on suspicion that scores were killed when a candle factory was destroyed in the small city of Mayfield. 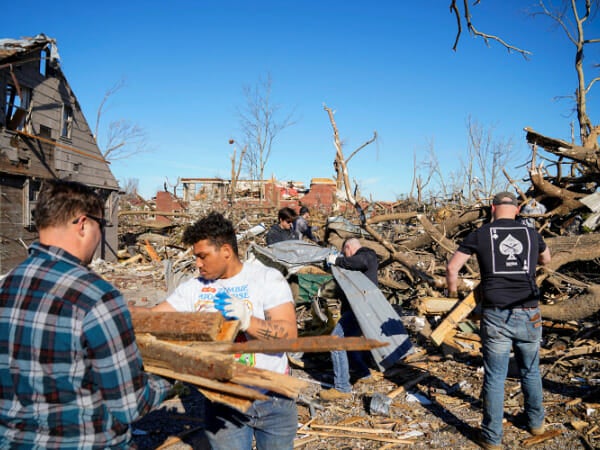 Up to 70 people at the factory had been believed dead, but that number could be revised down to 16 or fewer, a company spokesman said, raising the possibility the governor’s death toll estimate could come down significantly.

Among the 110 people who were at the factory, eight have been confirmed dead and eight others remained missing, said Bob Ferguson, a spokesperson for Mayfield Consumer Products.

“There were some early reports that as many as 70 could be dead in the factory. One is too many, but we thank God that the number is turning out to be far, far fewer,” Ferguson told Reuters, adding that rescue teams were still searching for the eight who remained unaccounted for. It was unclear how many factory workers Beshear was counting in his estimated death toll, which he formulated on Saturday and said on Sunday remained unchanged – at least for now.

“We’re still getting information in on the candle factory. The owner has been in contact and believes he has some different information. We are trying to verify it. If so, it may be a better situation and the miracle we were hoping for,” Beshear told a news conference earlier on Sunday evening.

The governor’s office could not be reached for further comment late on Sunday.

Dakota Moore, 20, was working at the candle factory when the tornado warning came. As was the drill, everyone – about 100 people – lined up in the hallway in the center of the building, near the bathrooms. 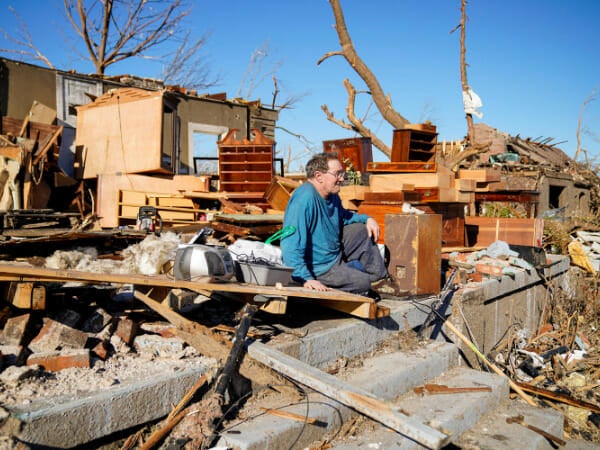 Rick Foley, 70, sits outside his home after a devastating outbreak of tornadoes ripped through several U.S. states in Mayfield, Kentucky, U.S. December 11, 2021. “I was in the middle of it, just trying to pull the pieces together now,” said Rick who survived the storm crouched in a doorway inside his home. REUTERS/Cheney Orr

“My ears started ringing. I started looking around and everybody down on the other side by the women’s bathroom started ducking down. The walls started coming in on that side. There was this old lady, I was trying to get to her, and the wall took me down,” Moore said.

The next thing he knew, he was getting wet as the roof above him had collapsed and it was raining.

Moore said he tried to help another man who was stuck in rubble up to his neck, but was unable to lift him out.

“I was able to get to his neck to see if he had a pulse or anything. Flatline,” he said.

Two days after disaster struck, rescue workers scoured debris for survivors and many people without power, water or even a roof over their heads salvaged what they could. 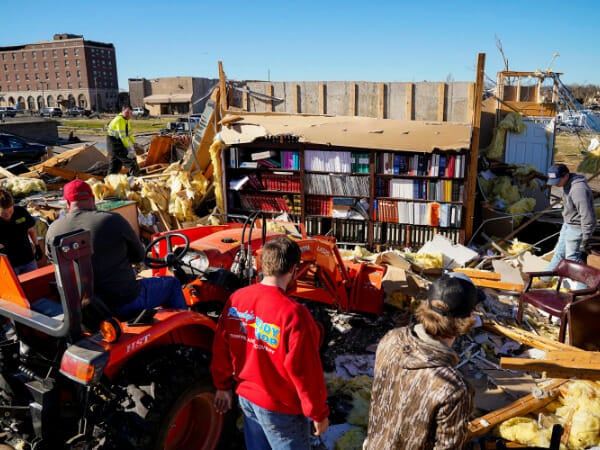 A lone bookshelf stands amid the rubble as people pick through and clean debris after a devastating outbreak of tornadoes ripped through several U.S. states, in Mayfield, Kentucky, U.S., December 12, 2021. REUTERS/Cheney Orr

While Kentucky was hardest hit, six workers were killed at an Amazon.com Inc warehouse in Illinois after the plant buckled under the force of the tornado, including one cargo driver who died in the bathroom, where many workers told Reuters they had been directed to shelter.

A nursing home was struck in Arkansas, causing one of that state’s two deaths. Four were reported dead in Tennessee and two in Missouri.

Nowhere suffered as much as Mayfield, a community of about 10,000 in the southwestern corner of Kentucky, where the large twisters also destroyed the fire and police stations.

The governor said the tornadoes were the most destructive in the state’s history and that even the sturdiest structures of steel and brick were flattened. One twister tore across 227 miles (365 km) of terrain, almost all of that in Kentucky, Beshear said.

Best places to live in Texas

Forecasters say tornadoes are unusual during cold weather this late in the year, and President Joe Biden told reporters he would ask the Environmental Protection Agency to examine what role climate change may have played in fueling the storms.

“It didn’t take a roof, which is what we’ve seen in the past. It exploded the whole house. People, animals … just gone,” Beshear said of the storm system.

More than 300 members of the National Guard were going door to door and removing debris. Teams were working to distribute water and generators.

The U.S. Federal Emergency Management Agency was opening shelters and sending teams and supplies, including 30,000 meals and 45,000 liters (12,000 gallons) of water.