Longtime US senator and presidential candidate Bob Dole dies at 98

Longtime US senator and presidential candidate Bob Dole dies at 98

Bob Dole, who overcame grievous World War Two combat wounds to become a pre-eminent figure in U.S. politics as a longtime Republican senator from Kansas and his party’s unsuccessful 1996 presidential nominee, died on Sunday. He was 98.

Dole, known for a wit that ranged from self-deprecating to caustic, died in his sleep, the Elizabeth Dole Foundation said. Dole announced in February that he had been diagnosed with advanced lung cancer and would begin treatment.

“America has lost one of its heroes; our family has lost its rock,” Dole’s family said in a statement. “He embodied the integrity, humor, compassion and unbounded work ethic of the wide open plains of his youth. He was a powerful voice for pragmatic conservatism.” 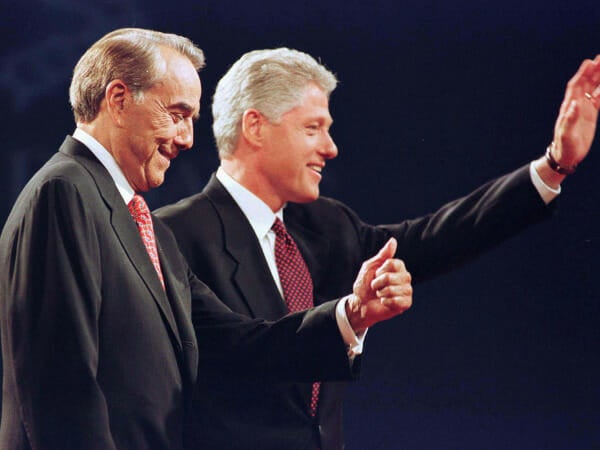 Dole, known for referring to himself in the third person, made a classic American journey from the poverty of the Great Depression of the 1930s, through World War Two battlefields to the corridors of power with a stoic Midwestern dignity.

He represented Kansas in Congress for 35 years: 1961 to 1969 in the House of Representatives and 1969 to 1996 in the Senate. Dole helped shepherd Republican President Ronald Reagan’s legislative agenda as Senate majority leader in the 1980s and spearheaded important legislation of his own.

Dole, who lost the use of his right arm from a war wound, was an advocate for the disabled and worked to shore up the finances of the Social Security retirement program. Dole was instrumental in passage of the 1990 Americans with Disabilities Act prohibiting discrimination on the basis of disability in employment, public accommodations and transportation. 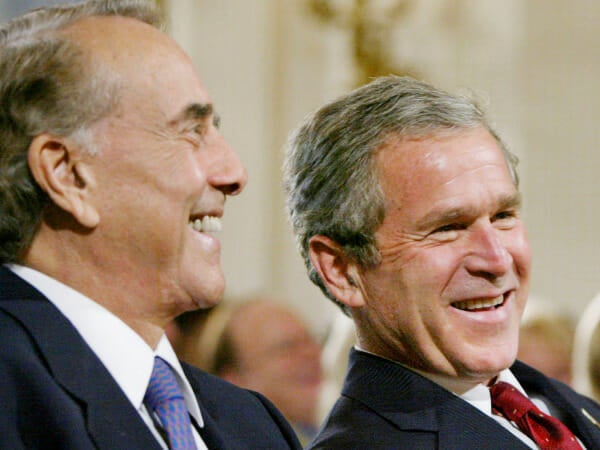 He also was a key figure behind building a memorial honoring Americans who served in World War Two on Washington’s National Mall, now a popular tourist stop.

President Joe Biden fondly recalled his visit to Dole in February at the Watergate complex in Washington where he lived.

“We picked up right where we left off, as though it were only yesterday that we were sharing a laugh in the Senate dining room or debating the great issues of the day, often against each other, on the Senate floor,” Biden said in a statement.

“Though we often disagreed, he never hesitated to work with me or other Democrats when it mattered most,” Biden said in a statement, a contrast to today’s bitter partisanship that has made it hard for the major parties to cooperate on legislation.

Former President Donald Trump called Dole “an American war hero.” In a statement, Trump added, “the Republican Party was made stronger by his service.”

Dole, who described himself as “a Trumper” in support of the former president, in July voiced impatience with Trump’s ongoing allegation that the 2020 election had been stolen from him because of massive voter fraud — a claim that has been rejected by several court challenges and Trump’s own Justice Department.

“He lost the election, and I regret that he did,” Dole told USA Today’s Susan Page. “I’m sort of Trumped out,” he added.

“When I think of the greatest generation, I think of Senator Bob Dole — a man who dedicated his life to serving our country. Rest In Peace, my friend,” Senator Mitt Romney, a former Republican presidential candidate, wrote on Twitter.

American flags were ordered to fly at half-staff at the White House, the U.S. Capitol and other federal buildings.

“To those who believe that I am too combative, I say if I am combative, it is for love of country,” Dole said in his speech accepting his party’s 1996 presidential nomination. “… And to those who believe that I live and breathe compromise, I say that in politics honorable compromise is no sin. It is what protects us from absolutism and intolerance.” 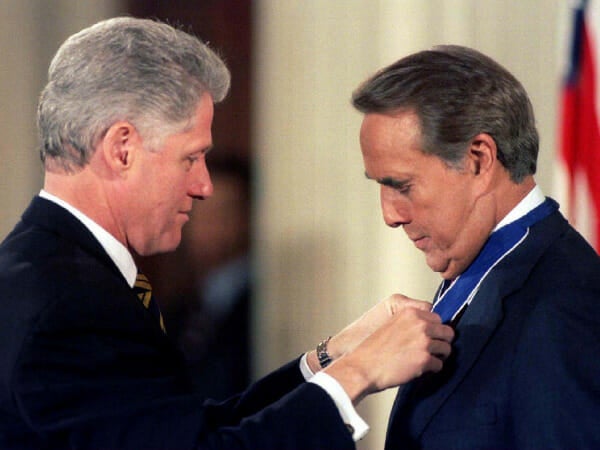 Dole defeated rivals including conservative commentator Pat Buchanan to secure the nomination. At age 73, he found himself facing Clinton, 50 at the time, a charismatic embodiment of the postwar baby boom who already had weathered charges of adultery and military draft evasion.

Dole subtly raised Clinton’s past by saying: “If something happened along the route and you had to leave your children with Bob Dole or Bill Clinton, I think you’d probably leave them with Bob Dole.”

Dole acquired a reputation for sometimes lashing out at rivals and assumed the role of “hatchet man” as Ford’s running mate in 1976.

In a 1976 debate with Mondale, Dole declared: “If we added up the killed and wounded in Democrat wars in this century, it would be about 1.6 million Americans, enough to fill the city of Detroit.” Trying to recoup from that statement, Dole displayed a flash of humor, saying, “They told me to go for the jugular, so I did – mine.”

When he sought the Republican presidential nomination in 1988, Dole snapped at Vice President George H.W. Bush, saying, “Stop lying about my record.” Bush won the nomination and the presidency. Dole attended Bush’s 2018 funeral service at the U.S. Capitol Rotunda, standing up from his wheelchair with the help of an aide and raising his left hand for a final salute.

Dole’s wife, Elizabeth, served as Republican senator from North Carolina from 2003 to 2009, and as Bush’s secretary of labor and Reagan’s secretary of transportation.

Robert Joseph Dole was born on July 22, 1923, one of four children of a grain elevator manager and a traveling saleswoman in Russell, Kansas.

As a U.S. Army lieutenant in World War Two, he led an assault on a German machine-gun nest in Italy. A shell wrecked his right shoulder, paralyzed his right arm, broke vertebrae, riddled his body with shrapnel and cost him a kidney. Decorated for heroism, Dole spent 39 months in hospitals before returning to civilian life.

Dole attended law school, unable to write but getting through with the help of his first wife, Phyllis, who transcribed class lectures he recorded. Dole had one daughter, Robin, from his first marriage.