A Michigan teenager was ordered held without bond on Wednesday after being charged with first-degree murder in the deadliest U.S. school shooting of the year, which killed four students and wounded seven other people.

“I am absolutely sure after reviewing evidence that it isn’t even a close call,” she told a briefing. “It was absolutely premeditated.” 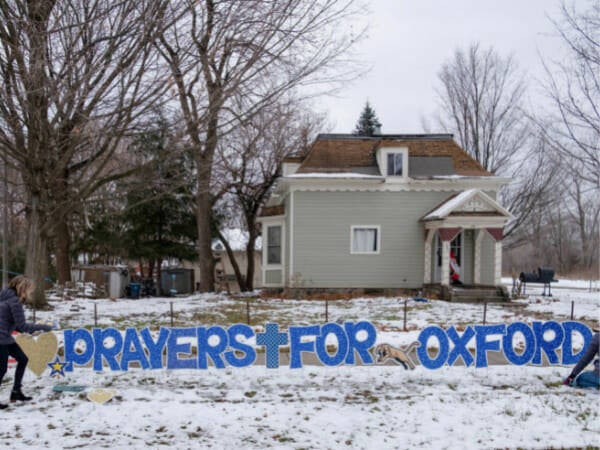 A sign reading “Pray for Oxford” is seen, a day after a shooting that left four dead and eight injured, in Oxford, Michigan. December 1, 2021. REUTERS/Seth Herald

In addition to four counts of first-degree murder, Crumbley faces one count of terrorism causing death, seven counts of assault with intent to murder and 12 counts of possession of a firearm in the commission of a felony, she said.

The shooting spree was the deadliest on U.S. school property this year, according to Education Week. It was the latest in a decades-long string of deadly American school shootings.

Crumbley, who is being charged as an adult, appeared on Wednesday at an online arraignment where Judge Nancy Carniak ordered him held without bond at the Oakland County Jail.

At the arraignment, Lieutenant Tim Willis of the Oakland County Sheriff’s Office said investigators had found videos that Crumbley recorded the night before in which he talked about shooting and killing students. 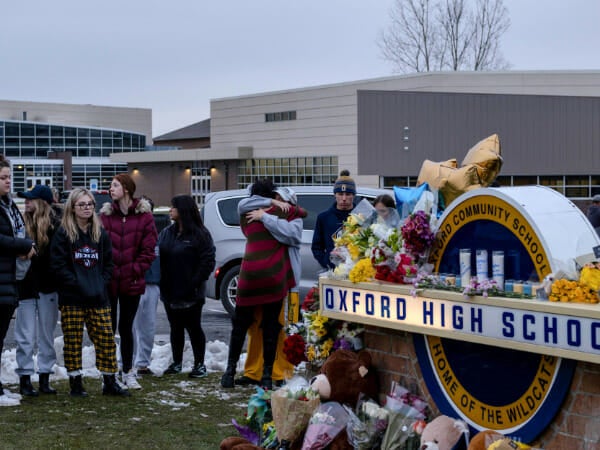 Students pay their respects at a memorial at Oxford High School a day after the year’s deadliest U.S. school shooting which killed and injured several people, in Oxford, Michigan, U.S. December 1, 2021. REUTERS/Seth Herald

“Further, a journal was recovered from Ethan’s backpack also detailing his desire to shoot up the school to include murdering students,” Willis said.

Crumbley opened fire at Oxford High School with a semi-automatic handgun – which his father had purchased four days earlier – after emerging from a restroom shortly before 1 p.m. EST (1700 GMT) on Tuesday, authorities said.

Oakland County Sheriff Michael Bouchard said Crumbley did not appear to be targeting any specific people during the shooting spree.

Of the six students and one teacher who were wounded, three students remained hospitalized late on Wednesday afternoon, including a 17-year-old girl in critical condition with a gunshot wound to the chest, the sheriff’s office said. Four others, including the teacher, have been discharged. 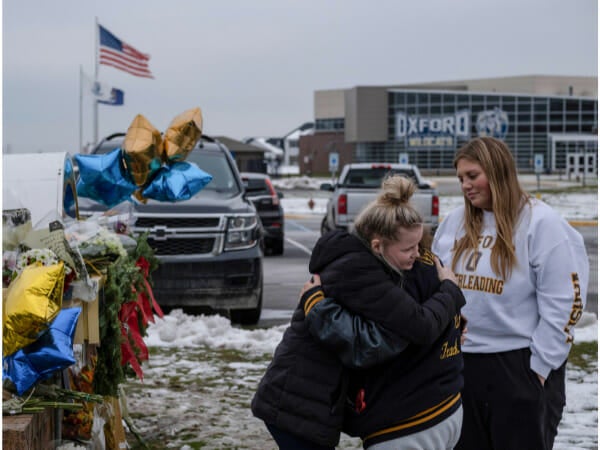 People embrace as they pay their respects at a memorial at Oxford High School, a day after a shooting that left four dead and eight injured, in Oxford, Michigan. December 1, 2021. REUTERS/Seth Herald

Bouchard told a briefing that investigators have yet to determine a motive for the shooting, adding that there was no evidence Crumbley had been bullied.

But he said school officials had contact with Crumbley the day before the shooting and another meeting with him and his parents on the morning of the shooting “for behavior in the classroom that they felt was concerning.” 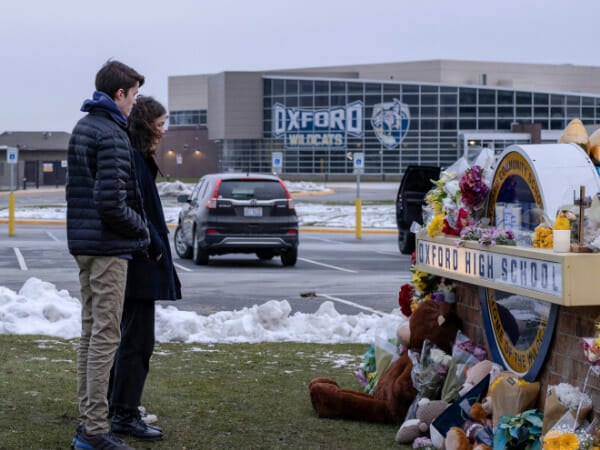 Students pay their respects at a memorial at Oxford High School a day after the year’s deadliest U.S. school shooting which killed and injured several people, in Oxford, Michigan, U.S. December 1, 2021. REUTERS/Seth Herald

More than 50,000 people had signed an online petition as of Wednesday morning to rename the school’s stadium after Myre, who played on Oxford High’s football team, saying he tried to disarm the shooter.

“Tate is not just a hero to his fellow students at Oxford High School but a legend, his act of bravery should be remembered forever and passed down through generations,” the petition on Change.org said.

Bouchard credited swift action by his deputies for preventing greater loss of life, saying they arrived on the scene within minutes and moved straight toward the sound of gunshots. Crumbley, who did not resist, was disarmed and taken into custody minutes after the shooting began, he said.

(Reporting by Brendan O’Brien in Chicago and Peter Szekely in New York; Additional reporting by Steve Gorman in Los Angeles and Tyler Clifford in New York and Kat Jackson in Washington; Editing by Jonathan Oatis and Peter Cooney)