Three white men were convicted of murder on Wednesday for chasing and shooting Ahmaud Arbery as the Black man ran through their neighborhood, with a Georgia jury rejecting a self-defense claim in a trial that once again probed America’s divisive issues of race and guns.

The verdicts were delivered by the jury of one Black man and 11 white men and women on its second day of deliberations after about a two-week trial of Gregory McMichael, 65, his son Travis McMichael, 35, and their neighbor William “Roddie” Bryan, 52, in the coastal city of Brunswick.

The case hinged on whether the defendants under a now-repealed Georgia law permitting citizen arrests had a right to confront the unarmed 25-year-old avid jogger last year on a hunch he was fleeing a crime. Defense lawyers also argued self-defense centered upon a contested claim by Travis McMichael, who fired the fatal shots, that Arbery moments earlier had grabbed the pump-action shotgun that was used to kill him. Travis McMichael looks back at his mother and sister in the courtroom after the jury convicted him for the murder of Ahmaud Arbery in the Glynn County Courthouse, in Brunswick, Georgia, U.S., November 24, 2021. Stephen B. Morton/Pool via REUTERS

All three defendants were convicted of murder, aggravated assault, false imprisonment and criminal intent to commit a felony. They face a minimum sentence of life in prison with the possibility of parole. Defense lawyers said they will appeal.

President Joe Biden said the convictions showed that America’s criminal justice system is “doing its job,” though the killing was “a devastating reminder of how far we have to go in the fight for racial justice in this country.”

“Instead, we must recommit ourselves to building a future of unity and shared strength, where no one fears violence because of the color of their skin,” Biden said in a statement.

There was never any dispute that the younger McMichael fired his shotgun three times at Arbery at close range on Feb. 23, 2020, in the suburban community of Satilla Shores. It was captured on a graphic cellphone video made by Bryan, stoking outrage when it emerged more than two months later and the public learned that none of the three men had been arrested. 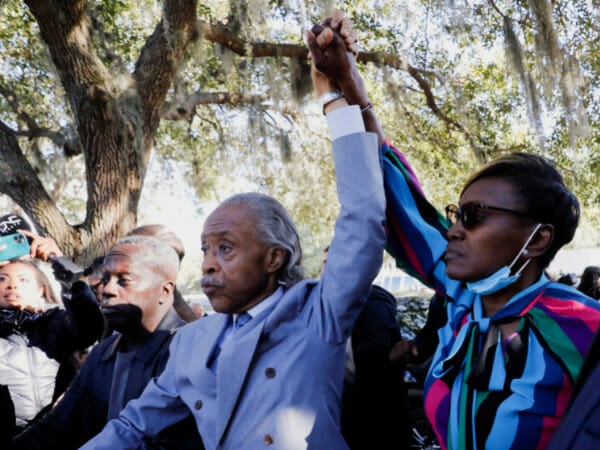 Reverend Al Sharpton and Wanda Cooper-Jones, mother of Ahmaud Arbery, raise their hands outside the Glynn County Courthouse after the jury reached a guilty verdict in the trial of William “Roddie” Bryan, Travis McMichael and Gregory McMichael, charged with the February 2020 death of 25-year-old Ahmaud Arbery, in Brunswick, Georgia, U.S., November 24, 2021. REUTERS/Marco Bello

Lawyers for the McMichaels argued that the killing was justified after Arbery ran past the McMichaels’ driveway in a neighborhood that had experienced a spate of property thefts. Both McMichaels grabbed their guns and jumped in their pickup truck in pursuit, with Bryan, unarmed, joining moments later.

Prosecutors said the defendants had “assumed the worst” about a Black man out on a Sunday afternoon jog. He was chased by the defendants for about five minutes around the looping streets. A law cited by the defense had allowed anyone to make a citizen’s arrest of individuals they have reasonable suspicion are fleeing a serious crime they committed.

Arbery’s name was added to those invoked in nationwide anti-racism protests in 2020 that erupted after the police killings of George Floyd and Breonna Taylor, both of whom were Black.

“It’s been a long fight. It’s been a hard fight. But God is good,” Arbery’s mother, Wanda Cooper-Jones, said outside the courthouse. “He will now rest in peace.”

Earlier, her head sunk into her chest as she wept upon hearing the verdict, with civil rights activist the Rev. Al Sharpton gripping her hand. Arbery’s father Marcus Arbery leapt up and cheered before sheriff’s deputies told him he had to leave. 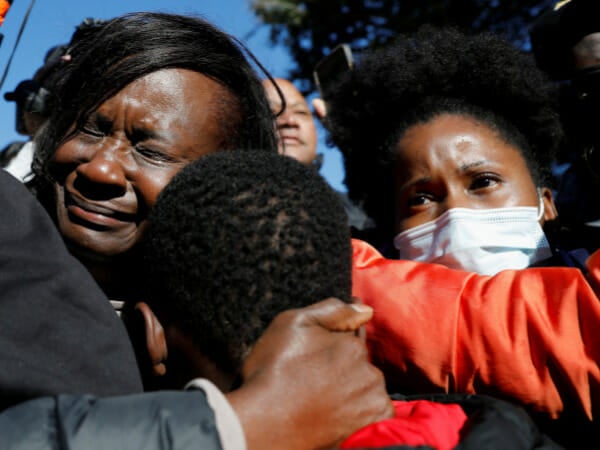 People react outside the Glynn County Courthouse after the jury reached a guilty verdict in the trial of William “Roddie” Bryan, Travis McMichael and Gregory McMichael, charged with the February 2020 death of 25-year-old Ahmaud Arbery, in Brunswick, Georgia, U.S., November 24, 2021. REUTERS/Marco Bello

In reacting to the verdict, Marcus Arbery later told reporters, “We conquered the lynch mob.”

There was jubilation outside the courthouse when the verdicts were rendered as a crowd of more than 100 people cheered and yelled “justice,” some waving flags including one for the Black Lives Matter movement.

“A jury of 11 whites and one Black stood up … in the Deep South and said, ‘Black lives do matter,'” Sharpton said.

Travis McMichael, looking red-faced, turned as he stood to leave the courtroom and mouthed “love you” to his mother, Leigh.

“I’m floored, floored with a capital ‘F,'” Laura Hogue, one of Gregory McMichael’s lawyers, said in the courtroom.

The three men face a federal trial next year on hate-crime charges, accused in an indictment of violating Arbery’s civil rights by embarking on the fatal chase because of his “race and color.” 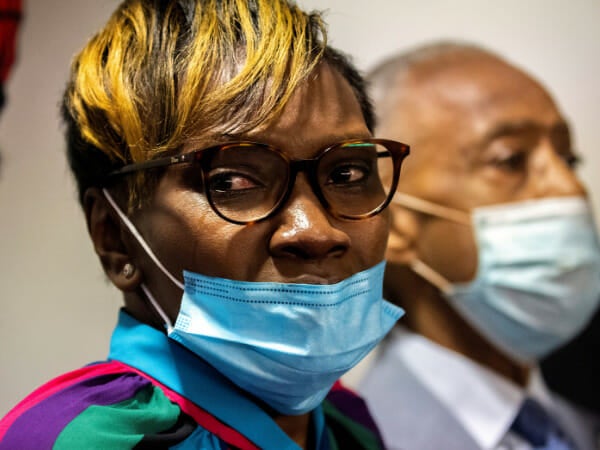 Tears streak down the cheek of Ahmaud Arbery’s mother, Wanda Cooper-Jones, after the jury convicted Travis McMichael in the Glynn County Courthouse, in Brunswick, Georgia, U.S., November 24, 2021. Stephen B. Morton/Pool via REUTERS

Wednesday’s verdict followed a jury’s Nov. 19 acquittal in another closely watched trial of an 18-year-old named Kyle Rittenhouse who fatally shot two men during racial justice protests in Wisconsin. Both cases highlighted the broader issue of U.S. gun violence that Biden has called a national embarrassment. In both, defendants claimed self-defense.

Travis McMichael, a former U.S. Coast Guard mechanic and the only defendant to take the witness stand, tearfully testified that he fired in self defense as Arbery grabbed the shotgun he was carrying while chasing him in the truck. Under cross-examination by a prosecutor, he conceded he told the police hours after the shooting he could not say for sure if Arbery actually grabbed the gun.

The trial represented another test case in how the U.S. justice system handles instances of unarmed Black people killed by white people. A nearly all-white jury was selected, and one of the defense lawyers repeatedly, but unsuccessfully, sought the removal of Black pastors and civil rights leaders including Sharpton and the Rev. Jesse Jackson from the courtroom.

The elder McMichael’s lawyer, Hogue, told jurors during the trial that the defendants had a duty to catch Arbery, who she portrayed as a frightening burglar with “long dirty toenails,” using a description from the autopsy report.

Lead prosecutor Linda Dunikoski during the trial said the defense aimed to “malign the victim,” calling that “offensive.” No evidence ever emerged connecting Arbery to any Satilla Shore thefts.