Dwayne Johnson, the action star whose films pull in big bucks at global box offices, is aiming to entertain viewers in their living rooms with his next movie spectacle, the globe-trotting Netflix heist caper “Red Notice.”

Johnson stars in the movie with Gal Gadot and Ryan Reynolds about a race to locate and steal three valuable artifacts. The movie will stream on Netflix starting Friday after playing for a week in a limited number of movie theaters.

The film ranks among the most expensive ever made by Netflix, with a price tag of roughly $200 million.

Johnson, the former wrestler known as the Rock and star of big-screen blockbusters such as “Jumanji” and “Furious 7,” said he believed it was important to offer at-home streaming of movies that traditionally debuted only in theaters. 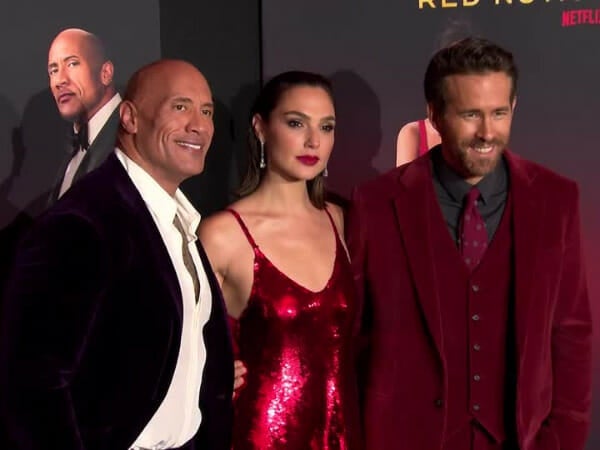 Dwayne Johnson is aiming to entertain viewers in their living rooms with his next movie spectacle, the globe-trotting Netflix heist caper “Red Notice.”

“I do have a handful of colleagues who are going to disagree with me,” Johnson said in an interview with Reuters. “For me, the most important thing is to take care of the people and how they want to be taken care of, and … there are a lot of people out there who want to enjoy movies from home.”

“Red Notice” follows Johnson’s FBI agent John Hartley as he tries to clear his name after being set up by an international art thief, The Bishop (Gadot).

To do so, he falls in with The Bishop’s biggest competition, Nolan Booth, played by Ryan Reynolds.

“I think Dwayne’s fighting style is sort of … brutalist, sort of not unlike his (World Wrestling Entertainment) life,” Reynolds said, while Gadot’s “is very athletic and elegant.””Usually my character is just running away from the fight as much as possible,” Reynolds said.

Production of “Red Notice” began shortly before COVID-19 started spreading around the world in early 2020. The health crisis forced a shutdown for months and a rewrite of filming plans.

“It was just a very intense environment, but I’ve got to give our crew such huge credit because they brought us to the finish line,” Gadot said.