Rittenhouse breaks down in tears while testifying on Wisconsin shooting

Rittenhouse breaks down in tears while testifying on Wisconsin shooting

Teenager Kyle Rittenhouse broke down crying while testifying in his own defense on Wednesday in his Wisconsin trial, saying one of the two men he is charged with murdering threatened to kill him and “ambushed” him before he opened fire with an AR-15-style rifle.

Rittenhouse, 18, is charged in the killing of Joseph Rosenbaum, 36, and Anthony Huber, 26, and the wounding of Gaige Grosskreutz, 27, during racial justice protests in the city of Kenosha on Aug. 25, 2020. He has pleaded not guilty and has said he acted in self defense.

Dressed in a navy blue suit and dark blue tie, Rittenhouse was composed on the witness stand until his attorney began asking him to detail his encounter with Rosenbaum, who video evidence showed was pursuing the teen when he turned and shot him four times.

“I didn’t notice Mr. Rosenbaum until he came out from behind the car and ambushed me,” Rittenhouse told the jury, before he started to breathe heavily and lose his composure, appearing to shed tears as the judge called for a break. 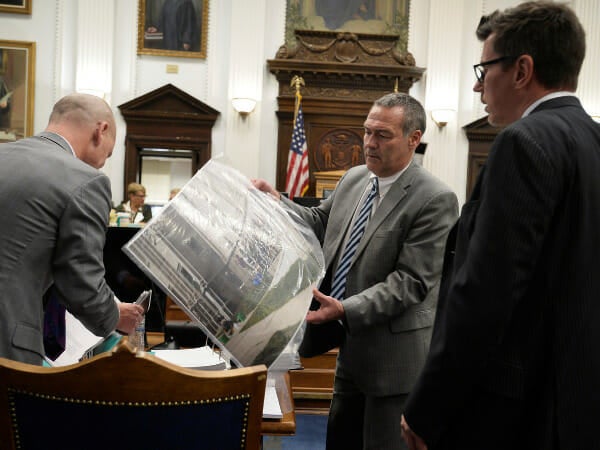 Corey Chirafisi, left, and Mark Richards, center, both attorneys for Kyle Rittenhouse, along with Assistant District Attorney Thomas Binger look at photographs from the night Aug. 25, 2020, taken by Nathan DeBruin during Rittenhouse’s trial at the Kenosha County Courthouse in Kenosha, Wisconsin, November 9, 2021. Sean Krajacic/Pool via REUTERS

Moments earlier, Rittenhouse testified that Rosenbaum threatened twice to kill him before their final encounter in the parking lot of a used car dealership in Kenosha.

Rittenhouse said Rosenbaum, speaking to his group earlier in the night, said “I’m going to cut your fucking hearts out.”

Rittenhouse testified that he was asked to help guard a used car dealership, separate from the one where he shot Rosenbaum, along with other armed men. Rittenhouse said his objective that night was to provide medical aid to anyone hurt, which is why he offered his bullet-proof vest to another person in his group.

By the night of the shootings, Kenosha had endured two nights of chaotic protests over the police shooting of a local Black man, Jacob Blake. Several businesses were burned to the ground and there were incidents of looting. Police used rubber bullets and tear gas to control the crowds.

The prosecution rested its case on Tuesday.

The case is the most high-profile civilian U.S. self-defense trial since George Zimmerman was acquitted in the fatal shooting of Trayvon Martin, an unarmed Black teenager, in Florida in 2013.

Like Zimmerman, Rittenhouse has emerged as a divisive figure and politics has coursed through the case. He is a hero to some conservatives who believe in unfettered gun rights and see the shootings as justified during the chaos in Kenosha, while many on the left see him as a symbol of a gun culture run amok.

During five days of testimony, prosecutors have tried to paint Rittenhouse as a vigilante killer who used deadly force without justification. He was 17 at the time of the shootings and has been charged with underage possession of his gun.

The two assistant district attorneys prosecuting the case struggled to elicit testimony countering Rittenhouse’s claims that he feared for his life. Some witnesses they called spoke about the erratic behavior of Rosenbaum that night.

(Reporting by Nathan Lane; Editing by Will Dunham)

Your subscription could not be saved. Please try again.
Your subscription has been successful.
MORE STORIES
Husband will stand trial for murder of missing Maya Millete
Alameda, California opens Bohol Circle Immigrant Park
Lawsuits filed against US state restrictions on abortion pills
Don't miss out on the latest news and information.