Rittenhouse shooting victim says he tried to disarm US teen

Rittenhouse shooting victim says he tried to disarm US teen

The only protester shot by Kyle Rittenhouse to survive testified on Monday that he believed the U.S. teenager was an “active shooter” and was trying to disarm Rittenhouse when a bullet from the teen’s semi-automatic rifle severed part of his arm.

Gaige Grosskreutz, 27, also testified that he had pointed his Glock pistol in Rittenhouse’s direction but that he never intended to use his weapon and only advanced on the teenager as a last resort because he thought he “was going to die.”

Rittenhouse, 18, has been charged in the deaths of two men and with attempting to kill Grosskreutz during racial justice protests on Aug. 25, 2020, in Kenosha, Wisconsin, where police shot and wounded a Black man, Jacob Blake.

Grosskreutz, a former paramedic, was carrying a medical kit and said he had come to help the injured, as he had at dozens of Black Lives Matter protests prior to that night. He said he followed Rittenhouse because he saw the potential for trouble and thought he might need to provide medical aid. 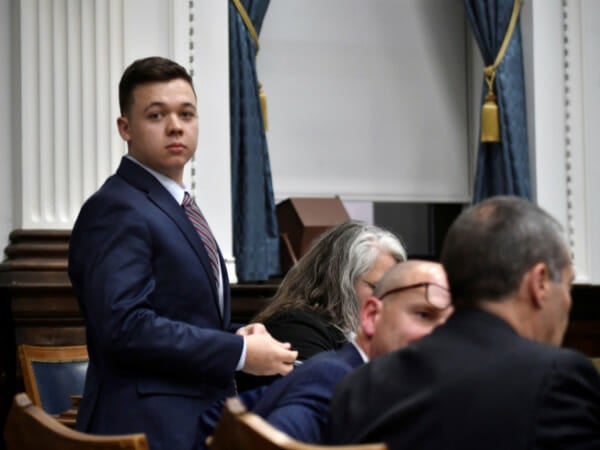 Kyle Rittenhouse stands up at the end of the day during his trial at the Kenosha County Courthouse in Kenosha, Wisconsin, U.S. November 8, 2021. Sean Krajacic/Pool via REUTERS

“I thought that the defendant was an active shooter,” Grosskreutz told the jury.

His testimony was seen as critical in the most high-profile civilian self-defense trial since George Zimmerman was acquitted in the fatal shooting of Trayvon Martin, an unarmed Black teenager, in 2013.

Grosskreutz represented the only chance for lawyers from both sides to question a survivor and elicit testimony on his mindset and actions, which is crucial to determining whether Rittenhouse had reason to fear for his life.

Rittenhouse’s lawyers sought to portray Grosskreutz as dishonest, noting that he had did not tell the police in his initial interview that he was armed, and pointing out some inconsistencies in his early accounts of that night. 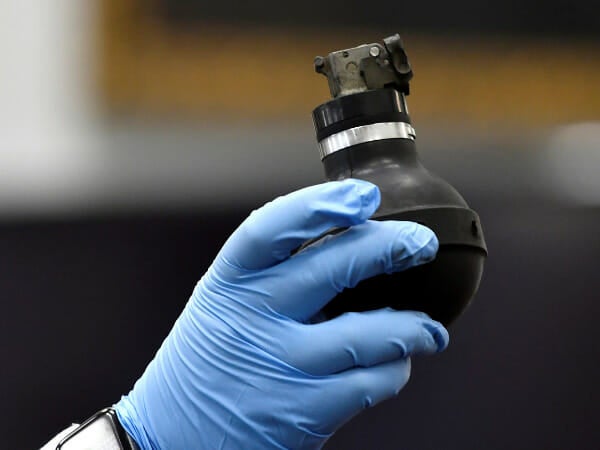 A teargas canister taken by Gaige Grosskreutz during the civil unrest in Kenosha late August of 2020 is shown to the court during Kyle Rittenhouse’s trial at the Kenosha County Courthouse in Kenosha, Wis., U.S. on Monday, Nov. 8, 2021. Sean Krajacic/Pool via REUTERS

The jury was shown video of an earlier encounter between Rittenhouse and Grosskreutz in which the teen said he was going to the police.

Grosskreutz did not know at the time that Rittenhouse had just fatally shot Joseph Rosenbaum, 36, but he had heard gunfire and said he began to worry for the teen’s safety as protesters pursued him down the street.

Grosskreutz, who was holding his pistol during the encounter, said on Monday that he believed Rittenhouse had “re-racked” his rifle, effectively loading another round into the chamber so it was ready to fire. Grosskreutz said he interpreted that to mean the “defendant wasn’t accepting my surrender.”

“At that moment, I felt that I had to do something to try and prevent myself from being killed or shot,” Grosskreutz said, adding he was thinking of trying to wrest the gun from Rittenhouse or to detain him. Kyle Rittenhouse, center, watches as his attorneys Corey Chirafisi, left, and Mark Richards look through documents before the start of the day at the Kenosha County Courthouse in Kenosha, Wis., U.S. on Monday, Nov. 8, 2021. Sean Krajacic/Pool via REUTERS

Rittenhouse, who has been charged with killing Huber and Rosenbaum and attempting to kill Grosskreutz, has pleaded not guilty and is expected to testify he acted in self-defense. Sitting next to his lawyers, the teen took detailed notes when Grosskreutz spoke about being shot.

Under cross-examination, Rittenhouse’s attorney sought to establish that Grosskreutz had pursued the teen with intent to harm him – an assertion Grosskreutz denied. The attorney, Corey Chirafisi, also pressed Grosskreutz on why he did not tell police in an interview right after the shooting that he was armed.

Chirafisi showed a photo around the time Rittenhouse fired his AR-15-style rifle to try to portray Grosskreutz as a threat, saying the teen did not fire when his hands were up and only did so when he dropped his hands and moved toward Rittenhouse.

Grosskreutz said initially that the still image showed his “bicep being vaporized” and denied it was the act of pointing his pistol in Rittenhouse’s direction that caused the defendant to fire.

But Chirafisi pressed Grosskreutz further, asking: “When you were standing 3 to 5 feet from him with your arms up in the air, he never fired, right?”

“It wasn’t until you pointed your gun at him, advanced on him, with your gun, now your hands down pointed at him, that he fired, right?” Chirafisi continued.