Weirdest episodes of ‘My Strange Addiction’

My Strange Addiction is a reality and documentary show about people who have unusual and compulsive behaviors.

Some of these strange behaviors include eating non-food items to having a ritual for daily activities. Several episodes include strange and bizarre personal fixations or beliefs.

When TLC aired this series, no one had any idea what they were in store for. What is this strange show all about?

What is the show My Strange Addiction about? 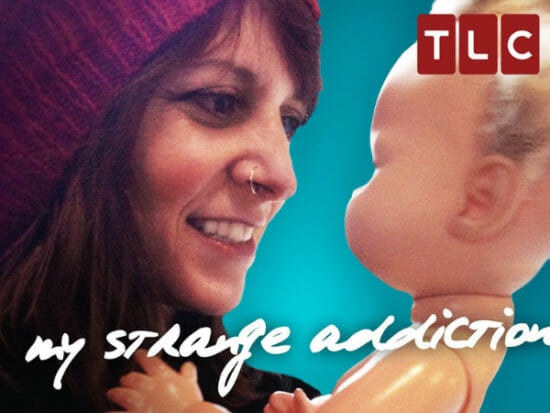 My Strange Addiction is centered around people who have a series and very strange addictions. Some of the addicts are very dangerous or life-threatening. The shows are 30 minutes per episode.

The episodes feature two subjects and their strange addictions. The shows include how relationships and families are damaged as well.

My Strange Addiction is very interesting, and parts of it are sad as well. The people on this show have serious and compulsive behaviors that they need treatment for.

The title reflects addictions. However, some of the subjects on this series simply make a life choice, and they cannot stop with their habits.

My Strange Addiction sheds some light on people and their strange or weird behaviors. Overall, this show is about people who struggle with obsessive-compulsive behavior.

The camera crew documents each subject’s life and addictive behavior. Following their story, the subjects then have a first-time meeting with a psychological expert.

Some of the subjects have disturbing obsessions, and others have dangerous ones as well. There are brief interviews with a therapist.

There are six seasons of My Strange Addiction. The first season starts with four subjects and documents their addictions. There are more episodes in the first season of this show than in all of the other seasons.

In each episode, you will see the loved one concerned with the subject’s obsession or behavior.

Many may wonder when did this show come on TLC? When can I watch it? We have all of this information for you as well.

When did it air?

The final episode of the show has the top weirdest addictions of the series. My Strange Addiction episodes are re-aired on TLC for old and n

10 Weirdest Episodes of My Strange Addiction to remember

My face every time I watch the show "My Strange Addiction" pic.twitter.com/eU2dFXmOFw

My Strange Addiction has had many weird episodes. However, there are ten that we found to be the weirdest episodes. If you watch this show, you can relate to the ten that we have chosen.

You may think you have a strange addiction. However, these ten might have you beat.

This is a strange one. Nathaniel is in love with his car, literally. This man is in a relationship with his Chevy Monte Carlo, and the car’s name is “Chase.” Nathaniel also has sex with his car.

Carrie, 53 and has cancer, has a little bit of a taste for drinking urine. She drinks her very own urine and about 80 ounces of it a day. Carrie also takes baths using her urine, and she also brushes her teeth with urine.

Casie is one of those people that gets very upset about death. The death of her husband has torn her apart so much that she carries his urn everywhere she goes. Her family is not happy about that—however, it’s worse. Casie has been eating the ashes of her dead husband very slowly.

4. Eating Plastic and Bathing In Bleach

You will never forget this episode. The first part of it features an 18-year-old girl eating plastic every day for over 11 years. This includes a remote control, CD cases, water bottles, plastic forks. This young lady has eaten up to 15 pieces of plastic a day.

The other part of this episode has a 28-year-old who loves taking a bath in bleach.

im watching my strange addiction and this lady has been snorting baby powder for the past 16 years…like a lot of it pic.twitter.com/pUhehyJxBY

Often, when we think about addiction, we may think of someone snorting something. However, baby powder is not what most of us imagine. This episode at first sounds like an intervention until we see that the addiction is snorting the baby powder. Jaye has been snorting baby powder for 16 years, and she snorts at least ten times every day.

6. Married to a Doll and Picking My Scabs

This episode has two very strange addictions. One man is married to a life-sized doll. The other part of the episode has a woman who will pick her scabs all day, and she spends hours just picking her scabs.

This episode is about a 29-year-old blood drinker. She has drunk blood for over fifteen years. Each month, she drinks a gallon of pigs’ blood, and she also drinks human blood.

Current mood: the girl on my strange addiction who found out her friend had been eating drywall for the past 7 years pic.twitter.com/DB8boC2Kij

Nicole, who is 26 years old, has a slight problem. She likes to eat the drywall, and she will take big chunks of drywall from her house to eat it. She has left many holes in her walls that are up to three feet wide.

Kesha eats toilet paper, and she eats 4-5 rolls every week. She snacks on toilet paper and also brings it with her when she goes to the movies.

How to Pass A Drug Test

IM WATCHING MY STRANGE ADDICTION AND THIS GUY IS MARRIED AND IN LOVE WITH A DOLL AND ACTS LIKE SHE'S REAL IM SCARED pic.twitter.com/gHq299zzda

Davecat is in love, and she is not a normal person, though, and she is a doll. Davecat and the Doll, named Sidore, live together. They go shopping together, and they even go out on dates as regular couples do.

This doll, Sidore, is plastic, however. Davecat gives the doll foot massages as w, and he is even quoted in the show stating that Sidore loves foot massages.

In Case You Missed It