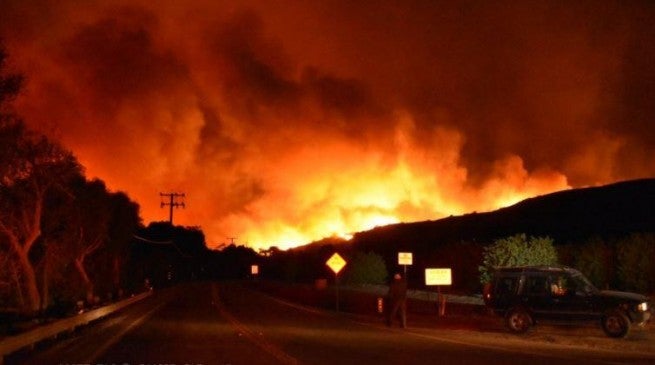 LOS ANGELES — A viral video making the rounds on social media shows fires on the hillside near the Skirball Cultural Center in Los Angeles along the southbound 405 freeway, mercilessly burning acres of earth. Drivers on their morning commutes stare in awe at the hellish landscape torched as the fire showed no signs of calming.

Since the early morning of Tuesday, December 5, fires have broken out all across Southern California’s hillsides, canyons and coastlines, prompting widespread evacuations and concern from residents and public officials.

With the help of the relentless Santa Ana winds, the Thomas (Ventura County), Creek (Sylmar), Rye (Santa Clarita) and Skirball (Bel Air) fires have scorched a total of 116,000 acres as of Thursday morning.

More than 5,000 firefighters (half of them directed to the massive Thomas fire) have been doing what they can to try to contain the expanding flames, fire officials said. Some 9,000 homes are still without power and school officials have shut down hundreds of schools in at least 15 districts.

At about 132,000 acres (and growing), the Thomas fire is the largest (roughly the size of the city of Denver) and only 10 percent has been contained as of Friday morning. On Thursday, the fire has spread north consuming parts of the Ojai Valley and west in La Conchita, reaching the Pacific Ocean.

More than 400 structures have been destroyed, most of them in the City of Ventura, officials said.

More than 50,000 residents have been evacuated and at least 15,000 homes have been threatened. A female body was found in the burned area near Ojai on Thursday, the known first casualty of the fires. Officials still have not identified the body.

Filipino-Americans Monica and Paul Salazar had been living in Ventura near Arroyo Verde Park since the 1990s. On Tuesday morning, they were ordered to evacuate.

“We smelled the smoke, that’s what we woke up to. We knew it was close,” Monica Salazar, a retired nurse, told the Asian Journal on Friday.

Their daughter had been calling them to urge them to evacuate as soon as possible. Paul Salazar went outside and remembers “really strong, hot and smoky winds.” He then knocked on neighbors’ doors, alerted them about the fire and urged them to evacuate, too.

“We were in panic mode and wanted as many people to leave because we knew the fire wasn’t going to stop,” Paul Salazar said, remarking on the “intense smoke” that permeated the neighborhood.

They then packed up their belongings and left before the sun was even up.

They’re currently staying with a relative in Culver City, and they remain “anxious” about the state of their home and when they’re allowed to go back. Portions of Highways 150 and 33 remain closed and the evacuations have not been lifted yet.

“It was mayhem,” Paul Salazar said, adding that both he and his wife were in a frenzy and knew they forgot to pack some valuables. “We were both barely awake, but we didn’t want to waste any time.”

“We’re ready to go home, but we have no idea what’s going to happen next,” Monica Salazar said.

The Creek Fire ignited in the Angeles National Forest around 3:45 am on Tuesday and reached a size of 12,605 acres. The fire has been 10 percent contained and officials have ordered the evacuation of 150,000 people. Officials also confirmed that 15 homes and 30 structures have been destroyed in the stubborn fire which continues to blaze.

The Rye fire has consumed 7,000 acres and firefighters have made substantial gains, achieving 15 percent containment. The mandatory evacuations have been lifted, as of Thursday morning.

Gov. Jerry Brown has issued an official State of Emergency in the Los Angeles and Ventura counties in response to the Thomas, Creek and Rye fires on Tuesday, urging residents to follow procedures delivered by local officials.

“This fire is very dangerous and spreading rapidly, but we’ll continue to attack it with all we’ve got,” Brown said. “It’s critical residents stay ready and evacuate immediately if told to do so.”

The Skirball Fire has burned 475 acres of the hillside near the upscale neighborhood of Bel Air. More than 600 firefighters have contained 20 percent (as of Thursday) of the fire. In response, Los Angeles Mayor Eric Garcetti issued a local State of Emergency for the area and urged residents who may be affected to evacuate and follow safety procedures delivered by officials.

“These are the days that break your heart,” Garcetti said as he announced the local state of emergency. “These are also days that show the resilience of our city.”

Four homes have been destroyed with 11 damaged, and more than 700 residents in a 3.2 square mile radius have evacuated, including Josephina and Josh Miranda who live on Chantilly Road.

The couple made the decision to evacuate their Spanish revival home (built in the 1940s) early Wednesday morning when they awoke to the neighbors’ dogs barking and saw the early morning sky painted a burnt orange tinge.

“The sky looked like it was gonna be engulfed by the fire, too,” Josh Miranda, an engineer, told the Asian Journal on Thursday morning. The family is currently staying with a friend in Hancock Park.

Neighbors and friends had been blowing up their phones alerting them of the nearby brush fire that erupted overnight. The Mirandas’ home is further away from the 405 freeway, but they wasted no time packing their valuables in their cars.

“We didn’t want to take any chances,” Josephina Miranda, a culture consultant in the film industry, said. “We packed up everything we didn’t want to burn and made our way here.”

“My wife woke me up before the sun even came up and told me there was a fire nearby,” said Josh Miranda, an engineer. “We looked outside and all you saw from the west side of our balcony were flames and smoke everywhere. We looked at each other and just agreed that we needed to leave.”

Unsure of the current state of their house, they are awaiting news from local authorities of when it’s safe to return to their neighborhood. They’ve lived in LA since the 1980s and have “never seen a disaster quite like this.”

“We don’t know when we can go back. We’re waiting to hear from officials and all that, but we still have friends who haven’t evacuated yet,” he added. “We’re both still a little shell-shocked about this whole thing, [and we’re] not even thinking about our home being destroyed.”

Experts pin the cause of the fire on the strong gusts of the Santa Ana winds coupled with the lack of recent rainfall in Southern California, according to the National Weather Service – Los Angeles, which tweeted that there was “hardly any rainfall so far this water year across most of [Southern California], and it’s not looking very promising in the next two weeks either.”

The Ventura County Fire Department, however, said in a statement that the Santa Ana winds are predicted to slow down by Saturday.

Fires in other counties

New fires in San Diego, Huntington Beach, Oxnard and San Bernardino County have ignited as fire officials across the Southland try to contain the ever-growing flames.

In northern San Diego County, the Lilac fire, ignited through sustained Santa Ana winds on Thursday, continued to blaze through Friday morning. So far, it has torched 4,100 acres overnight through Bonsall into Oceanside with no containment and 1,000 firefighters on the scene.

On Thursday morning, Huntington Beach Fire Department officials responded to a fire in Bartlett Park near Beach Boulevard and Adams Avenue brought on by winds gusting at about 30 mph.

Seventy children and 20 staff members were immediately evacuated from the La Petite Academy, which sustained damage to the roof and attic, according to HBFD Battalion Chief Jeff Lopez.

Within the hour, the fire was extinguished. The fire burned for two acres and no one was injured.

In San Bernardino County, the Liberty, Little Mountain, and Meyers fires burned almost 600 acres of land, but both were contained and no one was injured, according to the local fire officials who responded Thursday morning.

Those who live in the affected fire areas are urged to follow live updates from the city. For evacuation information, visit https://www.lacity.org/blog/fire-evacuation-information .