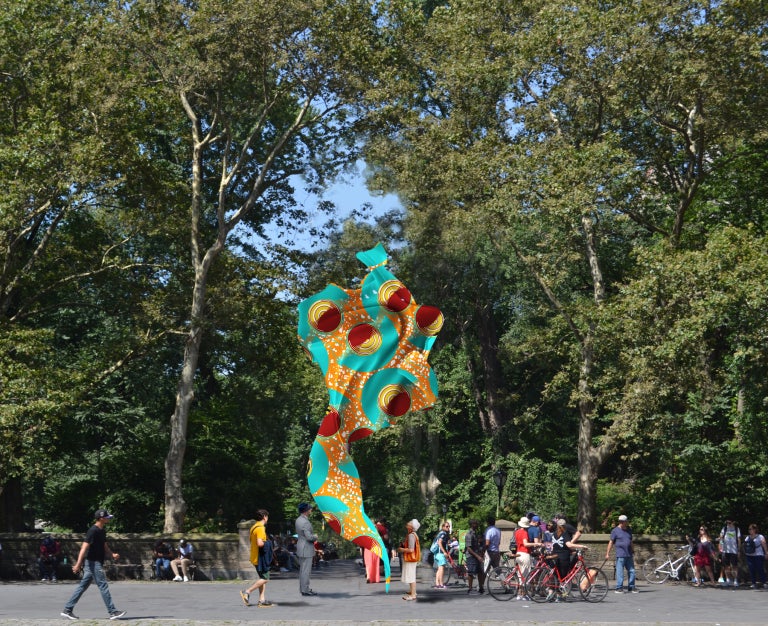 A part of the artist’s “Wind Sculpture” series, the work is crafted from fiberglass and recalls a ship’s untethered sail billowing in the breeze, according to Public Art Fund, which is presenting the work.

Shonibare continues an ongoing examination of cultural identity through the lens of colonialism with this latest work. It’s one of his most abstract, according to Public Art Fund Director & Chief Curator Nicholas Baume and encourages viewers to reflect on the movement of people and ideas across borders.

Covered with an intricate, handpainted pattern and colored in bold turquoise, red and orange, colors reminiscent of the Shonibare’s childhood in Lagos, the work is, according to its artist, the “perfect metaphor for multilayered identities.” The pattern takes its inspiration from Dutch wax batik print textiles, a trademark of Shonibare’s work, brought to Africa through Dutch colonization and now sold and worn throughout West Africa.

In its scale and its conspicuous location, the work references a traditional civic monument, but its vibrant colors and billowing shape offer a contrast to that and aim to call into question the role of monuments in heterogeneous societies, says the Public Art Fund.

The artist began his “Wind Sculpture” series in 2013, when he first began working with fiberglass in a large-scale format; the final work in his first “generation” of works in the series, Wind Sculpture VII, is permanently installed outside the Smithsonian National Museum of African Art.

The new work is the first in the second generation of “Wind Sculpture” works, featuring a greater size and greater complexity, with multiple twists and deeper folds in its structure.

Taiwan: An island for wishing