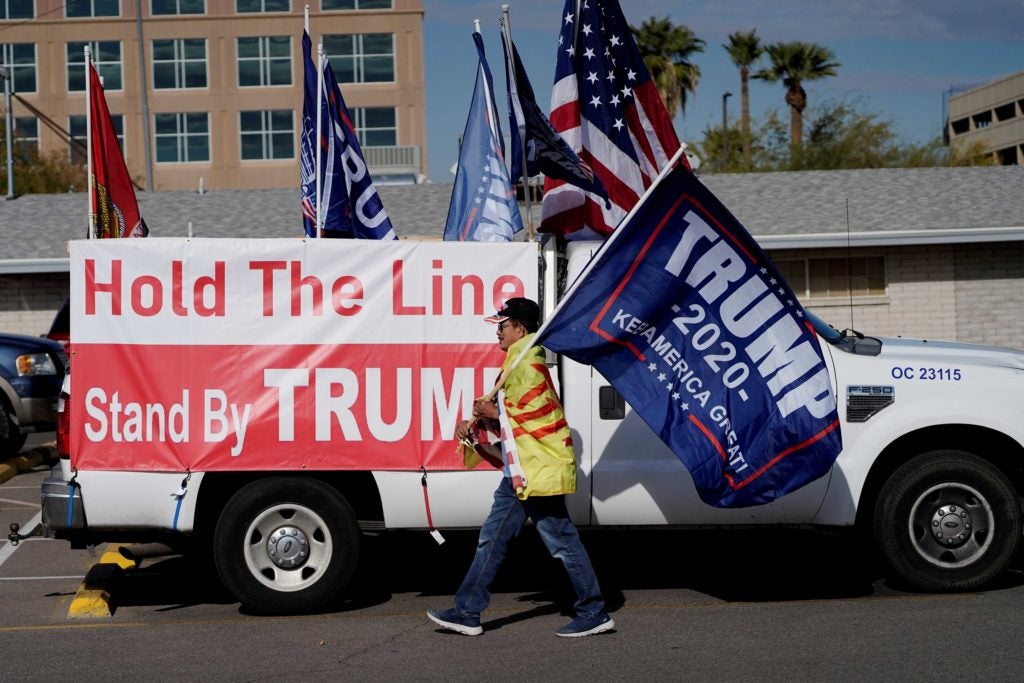 A protester caries a “Trump 2020” flag as Arizona electors gather to cast their votes for the U.S. presidential election, at the Arizona Capitol, in Phoenix, Arizona, U.S., December 14, 2020. REUTERS/Cheney Orr

Donald Trump lost the 2020 presidential election to Joe Biden in Arizona’s most populous county, a review of results by Trump’s Republican Party has reaffirmed, according to a draft report of the findings seen by Reuters on Friday.

In Texas on Thursday, the secretary of state’s office said the state had begun an audit of the presidential election in its four largest counties – Dallas, Harris, Tarrant and Collin. Although Trump carried the state, Biden won three of those counties under review.

Hours before the announcement Trump publicly called on Republican Governor Greg Abbott of Texas to launch an audit.

Harris County’s elections administrator, Isabel Longoria, said in a statement that the audit was an attempt “to delegitimize the 2020 election.”

In Arizona, Biden won by just over 10,000 votes, a narrow win confirmed by a hand recount and multiple post-election tests for accuracy. Biden carried Maricopa, which includes Phoenix, by about 45,000 votes, making it critical to his defeat of Trump.

The report “confirms the county’s canvass of the 2020 General Election was accurate,” Maricopa County said on Twitter, adding that the review was “littered with errors & faulty conclusions.”

The conclusion, if confirmed in an official announcement scheduled for later on Friday, will disappoint supporters of Trump who had pushed for the review, many in the expectation that it would prove his claims that he was robbed of victory due to widespread fraud.

Trump allies had viewed the election review in Arizona as a model for similar investigations in Pennsylvania, Michigan and other battleground states that Trump lost. Trump himself had predicted the audit would provide the evidence to support his fraud claims. So far no such proof has been produced either by Trump or his backers.

A wide array of election experts, Democrats and some Republican officials had rejected the Arizona audit as a highly partisan boondoggle run by contractors without relevant expertise and people who were out to prove that Trump won, regardless of the facts. The lead contractor is an obscure firm, Cyber Ninjas, whose chief executive has promoted conspiracy theories about orchestrated fraud in the election.

The audit has been marked by practices that critics have described as ranging from inappropriate to bizarre, including counters marking ballots with blue ink, which can alter how they are read by machines, and workers checking for traces of bamboo fibers based on a conspiracy theory that forged ballots may have been shipped in from Asia.

The make-up of the audit’s financial backers has also raised alarms. Outside groups tied to boosters of Trump’s efforts to undermine the 2020 election results raised $5.7 million for the audit, far surpassing the $150,000 contributed by the Arizona Senate, according to financial disclosures in June.

“You don’t have to dig deep into the draft copy of the Arizona Senate/Cyber Ninja audit report to confirm what I already knew — the candidates certified by the Maricopa County Board of Supervisors, Governor, Secretary of State and Attorney General — did, in fact, win,” Maricopa County Board Chair Jack Sellers, a Republican, said in a statement.

In a statement, Trump claimed the review confirmed that fraud had occurred and suggested the official announcement later on Friday would be “far different” from news reports on the draft document.

MOST READ
usa Texas school shooting victims: ‘They were just children with their whole lives ahead of them’
usa University of Hawaii names nursing school after PH-born nurse
usa MagSafe: Effortless and wireless charging for iPhones
usa Common NFT Scams and How to Avoid Them
usa Toronto police shoot and kill man carrying gun near schools
usa The 25 Best Co-Op Games You Should Play for PS4 in 2022
usa White House confirms no final decision yet on student loan forgiveness
DID YOU KNOW?
The 25 Best Co-Op Games You Should Play for PS4 in 2022
The Best Kindle of 2022: Which one should you buy?
A Beginner’s Guide to Buying a Vacuum Cleaner in 2022
Island Hopping in Tulum: The 12 Best All-Inclusive Tulum Resorts
How to Dispute a Debt and Win | Simple Tactics
The 12 Best Lat Exercises for Muscle Growth