Haitians at US border deported, others released as pressures fall on Biden

Haitians at US border deported, others released as pressures fall on Biden

Amid deteriorating conditions in migrant camps on both sides of the U.S.-Mexico border, U.S. authorities on Wednesday tried to deal with thousands of the mostly Haitian migrants that have gathered, releasing some in south Texas while deporting others on flights.

Wade McMullen, an attorney with the Robert F. Kennedy Human Rights organization said several hundred people, mostly pregnant women and parents with children, had been released in Del Rio, Texas over the past several days, straining resources at a local volunteer-run welcome center. The center does not have overnight capacity, he said.

“People are sleeping at the bus station outside or outside of the airport waiting for their bus or their plane,” to join family or other sponsors in the United States, he said. 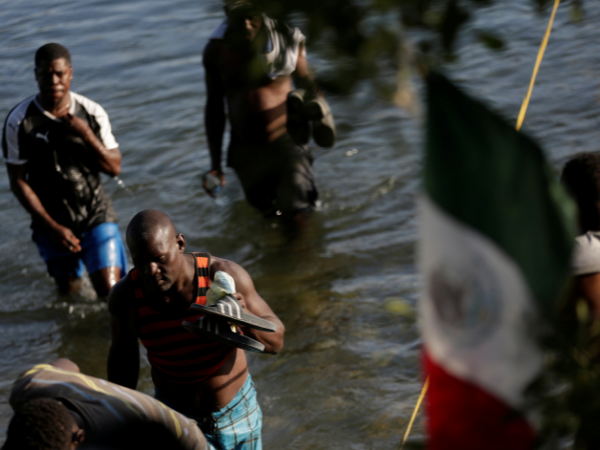 The U.S. government said it was continuing to fly hundreds of people, including families, back to Haiti, which has been hit by recent political turmoil and natural disasters.

It has been trying to clear the encampment under the international bridge in Del Rio, which reached as many as 14,000 people at its peak. Authorities have moved thousands away for immigration processing and deported more than 500 Haitians since Sunday.

A Department of Homeland Security (DHS) spokesperson said those who cannot be expelled under a sweeping Trump-era public health order known as Title 42 will be placed in immigration hearings, without specifying who would qualify for those exemptions.

Biden ended the expulsion of unaccompanied children under Title 42 but has continued to expel some families. The spokesperson said people who are not expelled are either detained or released with a notice to appear in immigration court, adding that everyone passes background checks and has their biometric information collected. 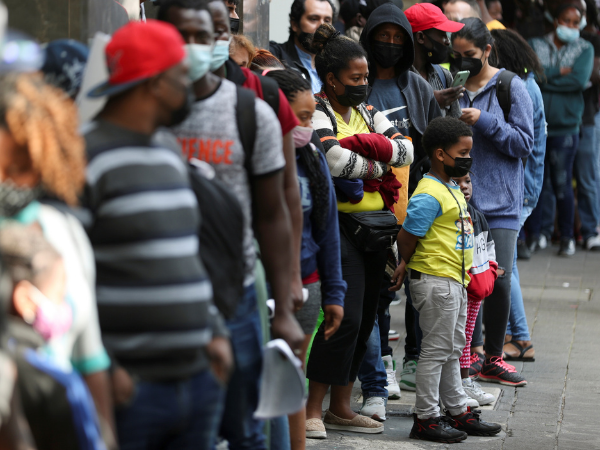 Migrants from Haiti and Central America line up to regularize their migratory situation outside of the Mexican Commission for Aid to Refugees (COMAR), in Mexico City, Mexico September 22, 2021. REUTERS/Edgard Garrido

McMullen said family members who are not parents or legal guardians of minor children are being separated from the rest of their families. In one instance, a grandmother who had been traveling with her daughter and grandson was separated from them, he said. The daughter and grandson were released, not knowing where the grandmother was. DHS did not immediately respond to a question about the separations.

Meanwhile, thousands still languished at the camp, waiting to be processed after being issued color-coded tickets.

Reuters images showed people with small babies and toddlers, one with an untreated hernia on his stomach, under makeshift shelters made out of reeds on the banks of the Rio Grande.

Clothing was hung out to dry and trash was strewn on the ground, while parents washed their children using jugs of river water and tried to find patches of shade in the punishing heat. Migrants said food remained scarce and there were not enough portable toilets.

On Wednesday morning, a trickle of people – mostly men – crossed back into Mexico across the Rio Grande in search of food.

Some have decided to stay on the Mexico side in Ciudad Acuna, across from Del Rio, citing shortages of food and poor conditions on the U.S. side. By Wednesday, around 200 people had set up a handful of camping tents and tarps as shelter.

One family in Ciudad Acuna was constructing a hut out of cardboard boxes. A line formed outside a Doctors Without Borders truck hoping to get medical consultations, with one woman worried about her 7-year-old son with a cough.

Most of the Haitians have not arrived direct from Haiti. Many had previously tried to settle in South America, but recounted difficulties finding work amid pandemic-related restrictions and the economic downturn. 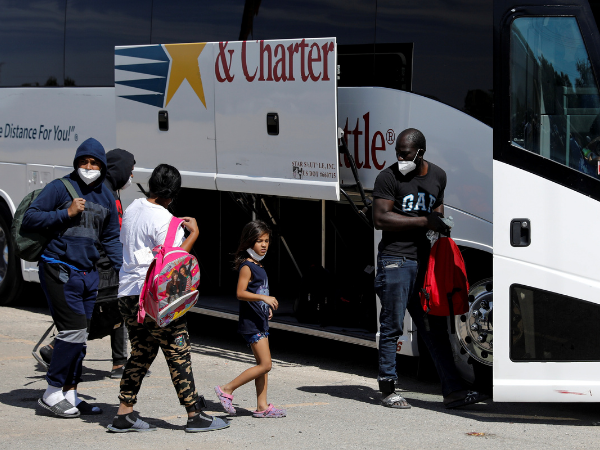 Migrants seeking asylum in the U.S. board a bus to Houston from Val Verde Border Humanitarian Coalition after being released from U.S. Customs and Border Protection, in Del Rio, Texas, U.S., September 22, 2021. REUTERS/Marco Bello

Jenny Joseph, a 37-year-old Haitian migrant in Ciudad Acuna, said she had lived for two years in Chile but left because she was unable to obtain legal status. She said her cousin was deported back to Haiti with his family after three days in the U.S. camp and she had decided to steer clear of the U.S. side.

U.S. politicians from both parties have criticized Biden’s handling of the situation. Republicans have said the Biden administration has encouraged illegal immigration by relaxing some of the hardline policies put in place by his predecessor, former President Donald Trump. Border arrests have reached 20-year highs this year.

“I think any unbiased person would say that the Biden administration’s border and immigration policies have been nothing short of a monumental disaster,” said Republican Senator Mitt Romney at a Congressional hearing on Tuesday. 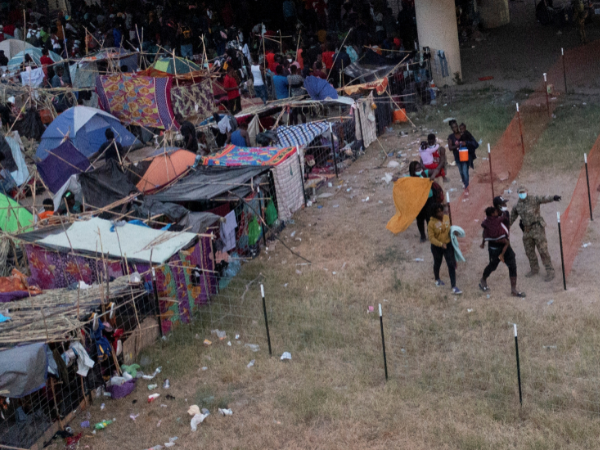 Migrants are routed out of a makeshift border camp after being processed along the International Bridge in Del Rio, Texas, U.S., September 22, 2021. Picture taken with a drone. REUTERS/Adrees Latif

Democrats have expressed anger over an incident over the weekend in which mounted U.S. border agents used reins like whips to intimidate migrants trying to cross the river. DHS Secretary Alejandro Mayorkas said the agents involved had been pulled from front-line duties.

On Wednesday, Vice President Kamala Harris said she “raised her grave concerns” about the incident in a call with Mayorkas and stressed the need for all border agents “to treat people with dignity, humanely and consistent with our laws and our values.” She said Mayorkas shared her concerns. 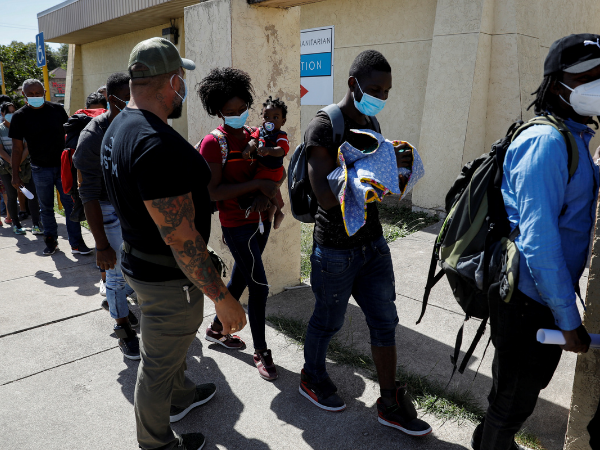 An employee checks the documents of a migrant from Haiti as he lines up to regularise his migratory situation outside of the Mexican Commission for Aid to Refugees (COMAR), in Mexico City, Mexico September 22, 2021. REUTERS/Edgard Garrido

The expulsion flights to Haiti have also faced criticism. There is profound instability in the Caribbean nation, the poorest in the Western Hemisphere, where a presidential assassination, rising gang violence and a major earthquake have spread chaos in recent weeks.

Filippo Grandi, the head of the U.N. refugee agency, has warned that expulsions to such a volatile situation might violate international law.

Some of the deported Haitian migrants on Tuesday reacted angrily as they stepped off flights in Port-au-Prince after spending thousands of dollars on arduous voyages to reach the U.S. border.

Mexico has begun transporting some of the migrants via planes and buses towards its border with Guatemala in the south. Flights have sent some 130 people to the southern Mexican city of Villahermosa, and another 130 people to Tapachula on the Guatemala border, a Mexican government official said.

One woman, speaking from behind a partition, told Reuters she did not know where they were being taken.