Democrats in the House of Representatives passed a bill on Tuesday to fund the U.S. government through Dec. 3 and suspend the nation’s debt limit until the end of 2022, sending it to the Senate where Republicans have vowed to block it.

The House vote was 220-211 along party lines. It was unclear how soon the Senate would act.

If Republicans stick by their refusal to support the measure in the Senate, Democrats will have to come up with a new strategy or quickly face the twin problems of a government in partial shutdown that is unable to pay its bills and the risk of a default for the first time in modern history.

House Speaker Nancy Pelosi and Senate Majority Leader Chuck Schumer set the stage on Monday for a showdown with Republicans when they said they would combine spending and debt measures in one bill, despite Senate Republican leader Mitch McConnell’s vow to block an increase in the $28.4 trillion debt ceiling.

On Tuesday, McConnell reiterated that vow. But he also said: “I want to repeat once again: America must never default. We never have and we never will.” 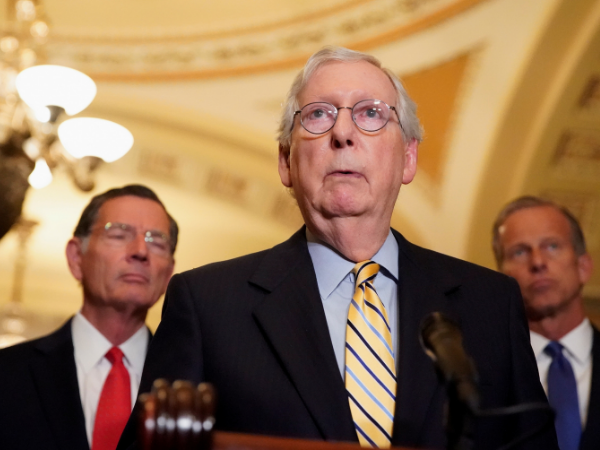 Speaking to reporters, McConnell repeated an argument he has made for weeks, that it is the majority party’s responsibility to raise the debt ceiling. That would have the effect of letting Republicans avoid voting for a debt limit increase ahead of next year’s congressional elections.

After the House vote, McConnell and fellow Republican Senator Richard Shelby said they had introduced a bill to fund current government operations through Dec. 3, but without raising the debt limit.

Republicans have said Democrats could raise the debt limit on their own through reconciliation, a maneuver that gets around the Senate’s rule that 60 of the chamber’s 100 members must approve legislation. Democrats have resisted doing that so far, saying the vote to raise the debt limit should be a bipartisan one.

“Playing games with the debt ceiling is playing with fire and putting it on the back of the American people,” Schumer said in a speech.

Democrats do not get to ram through radical, far-left policies on party-line votes, brag about how they are transforming the country, but then demand bipartisan cover for racking up historic debt.

As I've said since July, they will need to address the debt limit themselves.

Schumer and Pelosi will meet with their fellow Democrat, President Joe Biden, at the White House on Wednesday afternoon, a source familiar with the planning said.

The meeting comes as Washington grapples with the twin deadlines of funding the government and raising the debt limit, as well as a Democratic push to pass Biden’s mammoth $3.5 trillion domestic agenda, using the reconciliation maneuver.

Congress faces a Sept. 30 deadline to approve stopgap funding that would avert partial government shutdowns with the start of the new fiscal year on Oct. 1.

The Treasury Department will some time in October exhaust its borrowing authority unless the debt limit is raised.

The bill would suspend the limit on government borrowing through December 2022.

The current debt ceiling already has been breached, with debt at $28.78 trillion. It is being financed temporarily through Treasury Department “extraordinary measures” that are projected to be exhausted in October.

As Congress hurtles toward a possible partial government shutdown if a deal is not reached, Democrats and Republicans both have warned of dire consequences, including eventual disruptions in benefit checks to veterans and Social Security retirement recipients.

Republicans said they would support a temporary spending bill to avert a shutdown if the debt limit extension were stripped out of the bill.

“Republicans simply don’t have to vote to force a default,” Schumer said.

Republicans argued that while they do not want a debt default, they do not support increasing the borrowing limit at a time when Democrats aim to pass such a huge amount of new domestic spending – programs Democrats say will be paid for with tax increases on the wealthy and corporations.

“The bill that Speaker Pelosi is bringing through this week will not become law. They’re going to have to go back to the drawing board,” No. 2 House Republican Steve Scalise told a news conference.

Schumer said much of the latest debt is related to spending that Republicans supported during Donald Trump’s presidency, including December’s emergency COVID-19 relief bill.

LATEST
Warner Bros. Discovery expected to launch new streaming strategy
6 Best Press Release Distribution Services for Your News
Inflation takes a toll on finances of low-income, young Americans
Should you sign that severance agreement?
Why You Should Invest in Apple Stocks Right Now
How to Work Remotely When Your Internet Goes Out