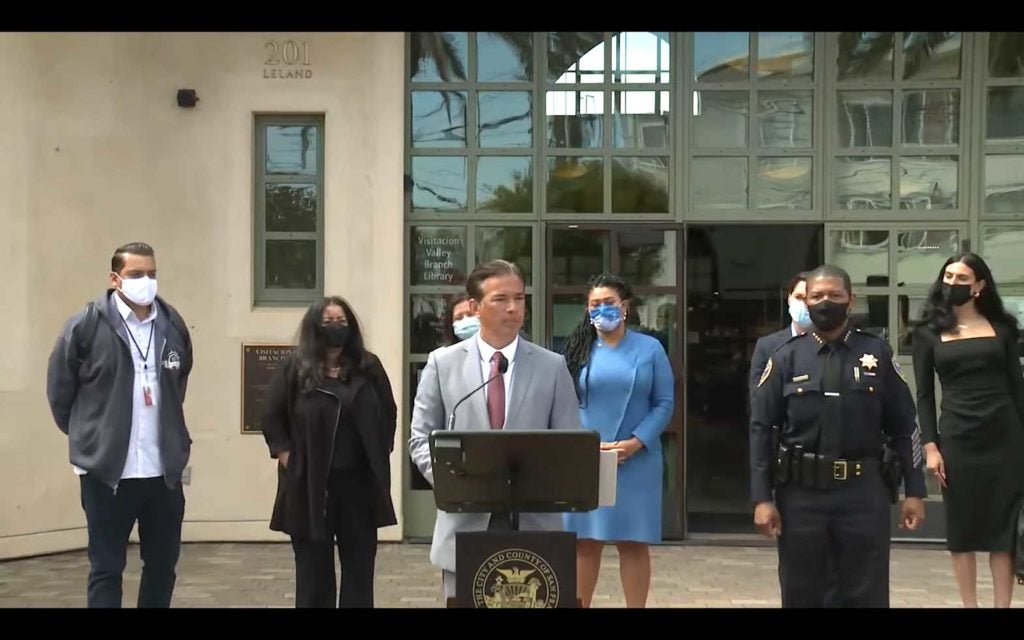 California Attorney General Rob Bonta on Thursday kicked off a series of 13 roundtable discussions that will take place across the state to address hate crimes. Seen with him in photo is San Francisco Mayor London Breed in light blue dress. SCREENSHOT

SAN FRANCISCO – Attorney General Rob Bonta has launched a series of 13 roundtable discussions across California as part of his efforts to address hate crimes in the state.

Outside the Visitacion Valley Branch Library in San Francisco on Thursday afternoon, Bonta and local community leaders shared with media about the landscape of hate crimes in California and the importance of Bonta’s roundtable discussions.

“For too many of our communities right now, we are in a full-on state of crisis, a full state of emergency when it comes to hate,” Bonta said.

The attorney general’s office reported a 31 percent increase in hate crimes from 2019 to 2020, with increases in crimes involving racial bias and gender bias. Anti-Asian hate crimes in particular have seen an increase during the coronavirus pandemic. President Joe Biden in May signed a bill into law meant to address the attacks.

While statistics can shed light on what communities are experiencing, they don’t tell the full story, Bonta said. He added that Thursday’s roundtable discussion highlighted various avenues to tackle hate crimes across all communities and their impact, including addressing intergenerational trauma, providing linguistically and culturally competent services, victim-centered solutions and healing circles.

“There’s no panacea. There’s no cure all. But there are many ways to make progress,” he said.

Community leaders shared that the attorney general’s clear stance that hate crimes have no place in the state or country has brought a sense of security and hope. They also said that communities face multiple challenges in addressing the issue, like underreporting.

Sarah Wan, executive director of San Francisco non-profit Community Youth Center, said it has been an emotional time for the Asian American community with the uptick of hate crimes and incidents during the pandemic. She added that it’s important for all communities to work together to solve the problem, and that Thursday’s discussion revealed similar experiences across all groups.

Wan noted that violence prevention strategies are also important so that communities don’t only respond when there’s a crisis and don’t have to rely on GoFundMe campaigns when tragedy strikes.

San Francisco Mayor London Breed said addressing hate crimes at the core requires buy-in from local communities, support from law enforcement and a commitment from all levels of government to address it.

“We know that there’s no shortcut to this work, and finding the root cause and solutions will require a continuous work and continuous conversations of sharing of ideas, not just when something happens, but also proactively when something isn’t happening,” she said.

Bonta’s series of roundtable discussions is among ongoing efforts his office is taking to combat hate crimes. Other measures he’s taken include a report from the Department of Justice released in the summer, and publishing brochures in 25 languages to help individuals identify and report hate crimes, and access direct assistance.

He said Thursday’s conversation with community stakeholders was a reminder that communities have to work together collectively to move forward.

“And we can move forward when we have conversation, when we listen, when we communicate, as we just did,” he said.