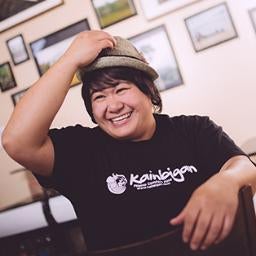 It was the first time Chopped hosted a New Year’s party, with four competing chefs had to prepare a festive three-course meal with traditional and extravagant holiday ingredients.

The show is divided into three rounds, each chef is given a basket of several unrelated ingredients and the prepared dish must contain all of them. At the end of each round the panel of rotating culinary judges decides which chef gets “chopped” based upon presentation, taste and creativity.

The featured judges for this episode were: Alex Guarnaschelli; Aarón Sánchez; Scott Conant.

Caabau got the celebration started with an appetizer dish of Crab Torta with Collard Green Laing and Champagne Butter Sauce. Alex Guarnaschelli commented, “Your sensibility really comes through and I respect that.”

Chef Charleen added her own twist on laing, using with collard greens, instead of typically stewed-in -coconut milk taro leaves. Scott Conant really loved the richness from the coconut milk.

She also used blinis as a binder mixed with the king crab legs made into torta, a Spanish-inspired Filipino omelet dish that she loved to eat while growing up.  Aarón Sánchez appreciated the big chunks of crab that were welcoming and brought a sense of comfort when he ate the torta.

Moving into the second round, Caabay triumphed with her special entrée dish of Martini Steamed Lobster Tail with Barbecue Strip Loin and Curried Black-Eyed Peas. She wanted to create a party on the plate for the New Year’s theme, and that she did.

Caabay says she always finds a way to bring people together through the food that she makes. “In my culture barbecue on a stick is popular, so my first instinct is to marinate the meat with all the yummy seasonings.”

Growing up in a Filipino household, she was always surrounded by amazing food shared with family and friends. It’s no wonder she ended up opening her own Filipino comfort food restaurant. Aarón Sánchez commented to the other judges, “Charleen’s going to show us a window into Filipino cuisine, she’s doing it her way, I really appreciate that!”

Alex Guarnaschelli chimed in by complimenting Caabay, “There’s some really great cooking here!” I love the meat, it’s deee-licious, when I pull the lobster out of the shell and I get the marinade on it, it’s delicious!”  Scott Conant said simply, “It’s good eating!”

Caabay topped off the party with a Funnel Cake with Pomegranate Grape Compote.  The dessert round can be a challenge at times but she made it. She commented, “I looked at Matt’s plate and see this fluffy white stuff… Oh-Oh! He used some kind of technique that I don’t even know…”

She transformed the featured ingredients into a playful twist on a festive holiday funnel cake with a last-minute sprinkle of toasted coconut, but it was a tad too sweet and needed more balance.

Scott Conant said, “Your instincts are great, but those are the nuances that you learn as time goes on.” Chef Charleen Caabay’s own recipe of true passion for food, pride in her Filipino heritage, determination and creativity won the judges over.