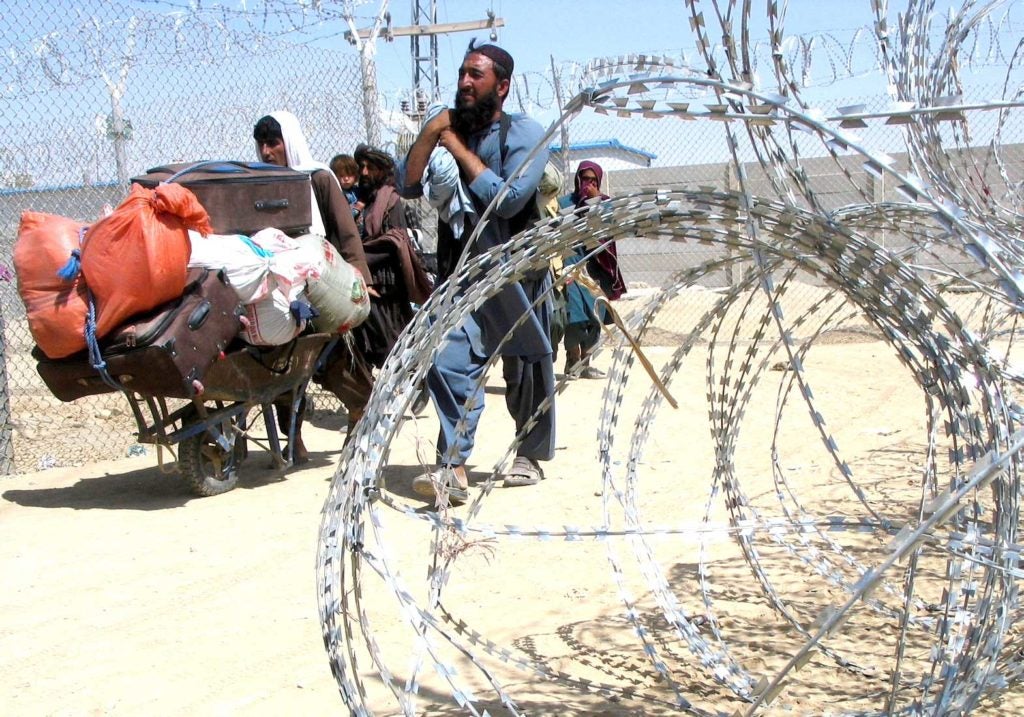 A family arriving from Afghanistan make their way through the Friendship Gate crossing point at the Pakistan-Afghanistan border town of Chaman, Pakistan August 19, 2021. REUTERS/Saeed Ali Achakzai

WASHINGTON – Kurt Campbell, the White House’s top Asia adviser, declared last month that a historic change in U.S. foreign policy was afoot, one that would shift U.S. focus away from the Middle East to Asia, where China’s growing might has cast shadows over Washington’s allies.

“It will be painful, in all likelihood. We’ll see some real challenges in places like Afghanistan,” Campbell told an Asia Society webinar, a blunt assessment of what since has come to pass as the Taliban’s swift takeover of the country has sparked a humanitarian crisis.

Officials argued that withdrawing from Afghanistan would free up time and attention of senior U.S. political and military leaders, as well as some military assets, to focus on the Indo-Pacific.

But experts and former officials say President Joe Biden’s poorly executed troop withdrawal from Afghanistan appears – in the near term and possibly for much longer – to be undermining the very goal of freeing the United States to concentrate on China, something successive presidents have sought, only to be pulled back to the Middle East.

Contrary to the planned quick pullout, Biden has been forced to send in thousands of troops to protect the evacuation of U.S. personnel and Afghans potentially subject to Taliban retribution, while the chaos has unleashed a political storm at home.

Biden has said the original Aug. 31 deadline for troop withdrawal now may be extended to finish the job.

Moreover, the United States was forced to move its lone aircraft carrier in the Asia-Pacific, the Ronald Reagan, to the Middle East in June to help with the withdrawal. As the situation in Kabul has deteriorated, jets from the carrier have been flying over the city to provide extra security.

While the redeployment may only be short-term, the need to divert the carrier from the Asia-Pacific has raised questions about U.S. ability to project power there.

U.S. operations in Afghanistan are also likely to continue to consume the attention of senior officials who might otherwise have their eyes on Beijing.

“As Assistant Secretary for the Indo-Pacific, Ely Ratner has Afghanistan in his portfolio. Where do you think his primary focus is for the next three months or longer?” said Eric Sayers, a defense policy expert at the American Enterprise Institute.

Others warn that terrorist groups will likely reestablish themselves in Afghanistan under the Taliban, raising the prospect that the United States will need to return in some fashion, much like it returned to Iraq to combat the rise of Islamic State.

David Sedney, who served as deputy assistant secretary of defense for Afghanistan, Pakistan and Central Asia, dismissed claims by U.S. officials that counterterrorism operations could be conducted from outside the country as a mirage.

“No one who is serious about counterterrorism believes it,” he said. “The United States is going to pay a terrible price for this at some point in the future. Another 9/11.”

For Campbell, architect of former President Barack Obama’s halting pivot to Asia, building U.S. bona fides in the Indo-Pacific has meant making good on unfinished business and Afghanistan was an enduring distraction.

Yet the chaotic evacuations from Kabul have evoked images of the 1975 U.S. withdrawal from Vietnam, a country Vice President Kamala Harris will visit next week to push back on China’s territorial claims in the South China Sea.

That trip, which includes a stop in Singapore, will make her the latest in a string of senior officials to travel to Asia as part of Biden’s effort to step up engagement there.

“Our strategic competitors around the world would have liked nothing more than to see us in Afghanistan for another 5, 10, 20 years dedicating even more resources to Afghanistan while it remained in the midst of a civil war,” a senior U.S. official told Reuters.

But the hasty pullout following a failed 20-year project in Afghanistan appears to have shaken some of the very allies Washington hoped to bolster with its Indo-Pacific push.

In Chinese-claimed Taiwan, President Tsai Ing-wen on Wednesday responded to the chaos in Afghanistan by saying the self-ruled island had no choice but to boost its own defense.

“It is not an option for us to do nothing ourselves and rely only on the protection of others,” she said.

And while experts are quick to dismiss most geopolitical comparisons of Afghanistan and Taiwan, there is general concern that this latest blow to American prestige undermines Biden’s pledge that U.S. leadership was back following the isolationist tendencies of the Trump administration.

“As bin Laden said back around 2001, this is an issue of demonstrating who was the stronger horse. The U.S. appears to be producing nags and mules, rather than racehorses,” said Dean Cheng of the conservative Heritage Foundation think tank, referring to Osama bin Laden, whose orchestration of the 9/11 attacks led the United States to invade Afghanistan.

“Taiwan and other East Asian states will be thinking about this.”