Vangie Paredes gets a drive-by birthday party for her 105th

Vangie Paredes gets a drive-by birthday party for her 105th 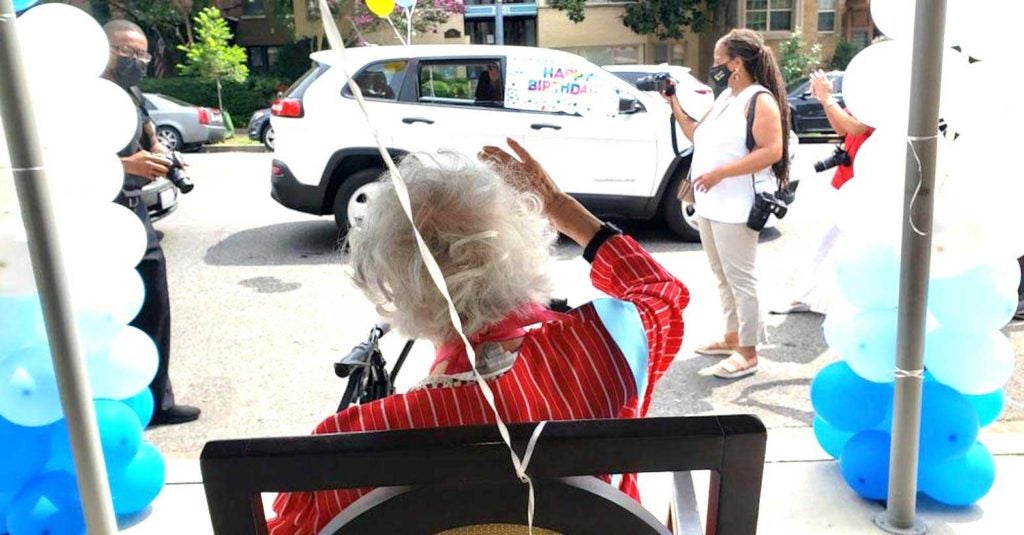 Vangie Paredes, 105, waves to well-wishers parading before her during her July 26 birthday. JON MELEGRITO

WASHINGTON, D.C. – Vangie Paredes, the oldest Filipino American in Washington, D.C., said her 100th birthday in 2016 “was great but this is the best one yet.” It was her 105th birthday last July 26.

Seated on a wheelchair at the entrance of the Chevy Chase House (a retirement home) where she resides, she smiled, blew kisses and waved as more than a dozen cars – decorated with balloons, streamers and colorful posters – drove by.  DC Metropolitan Police briefly stopped traffic on busy Connecticut Avenue to allow the mid-morning motorcade and revelry.

Being out and greeting well-wishers in person, albeit masked, was definitely much better than last year’s virtual birthday party, she recalls. Covid-19 scuttled a planned birthday party. Still, seeing familiar faces on a zoom grid and hearing birthday wishes from a computer screen was “something new and different.” And she had a real birthday cake afterwards. The on-line celebration was arranged by longtime family friend Rita M. Cacas of Silver Spring, Maryland.

On July 26 this year, when she turned 105, the Birthday Girl was delighted to be outside, taking it all in blissfully like a child: birds chirping; sirens blaring; friends clapping and cheering. After being cooped up in her sixth floor apartment for months, she welcomed the sights and sounds of a city come to life…for her.

A trio of friends from the Filipino American community, strumming a guitar and ukuleles, played “You Are My Sunshine,” followed by a serenade of Filipino ballads while officials from the DC Government, officers of the DC Metropolitan police, and leaders of AARP Ward 8 gathered around her. Then three loud cheers erupted: “Mabuhay si Vangie!” (Long Live Vangie!).

Tributes from the City

Laura Newland, Director of the Department of Aging and Community Living (DACL), presented a gold-embossed certificate from DC Mayor Muriel Bowser. It lauded Vangie for “recognizing the importance of advocacy, volunteering in your community to ensure that the Congress Heights Senior Wellness Center was financed and constructed, as well as with AARP on behalf of our city’s and country’s senior populations. Your hard work and tenacity are the epitome of a good citizen, and I am grateful for your long record of service to the residents of our nation’s capital.” 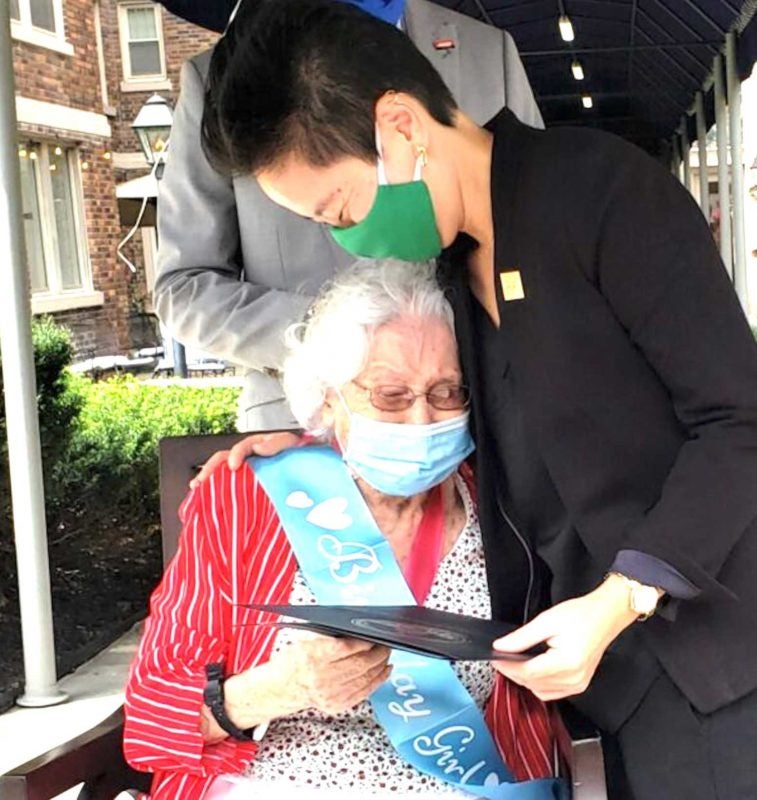 DC City Councilmember Trayon White, Sr. of Ward 8, where Vangie resided for many years, paid tribute to the centenarian for her “rich legacy and love for the District of Columbia, the Ward 8 community, your family and friends.” Vangie has received many awards including the DC Chapter of AARP Andrus Award for community service and the Department of Defense Civilian Award after 34 years of service.

Vangie Abellera Paredes was born in Brooklyn, New York in 1916. Her father was born in the Philippines, while her mother was a native of Spain. In 1921, when Vangie was 5 years old, her family moved to DC where her father worked at the Navy Yard. 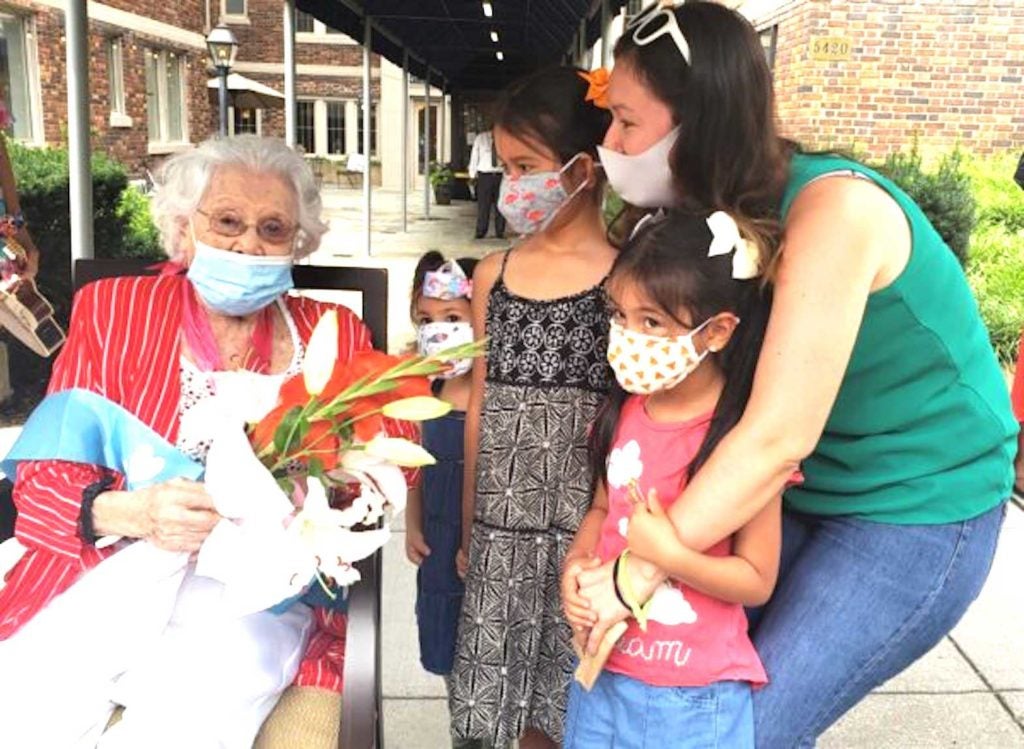 After graduating from The Washington School for Secretaries, she went to work for the Philippine Commonwealth Government-in-Exile, serving as a secretary to President Manuel L. Quezon.

She met her future husband, Juanito “Johnny” Paredes while working in the Resident Commissioner’s Office (which eventually became The Philippine Embassy.) They married in 1940 and a decade later had a son, Juan. 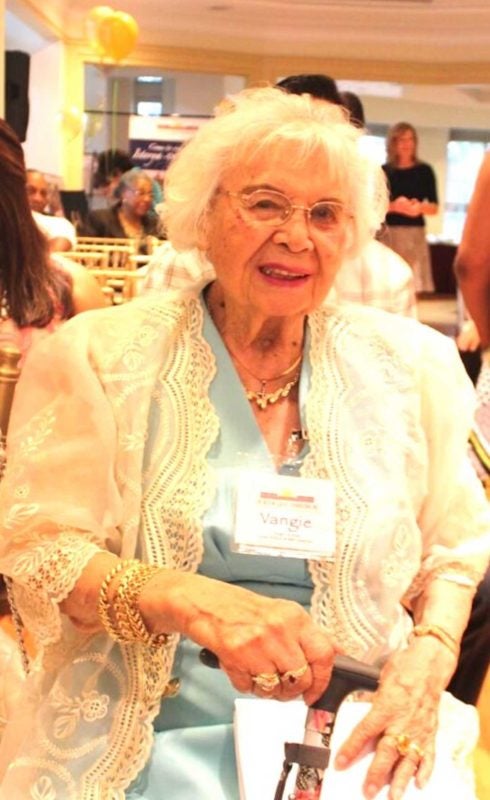 After 20 years, she retired from The Philippine Embassy and went to work for the US Department of Defense at the Pentagon. During her retirement, she volunteered with the Veterans Hospital, Ladies Auxiliary of the VFW Post 5471, AARP, Capitol Hill Strike Force, Senior Medicare Patrol and the Legal Counsel for the Elderly.

Having lived for more than a century, Vangie says, “I’m ready to go anytime, but I’m not pushing it.”

It is a great honor, she says, to donate her brain to John Hopkins University so they can find a cure for Alzheimer’s. Doctors have been amazed with her sharp and amazing memory.

Despite failing eyesight, she is a voracious reader and follows the news on TV, lamenting the human lives lost to the Coronavirus and the destruction caused by wildfires in the West Coast.  She has high hopes, however, for today’s young people to solve the world’s problems, like climate change. “These kids, they are very smart,” she says. “They will know what to do.”