Are the Lakers' Players Too Old? | Who will Retire Next?

With NBA free agency opening on August 2, the Los Angeles Lakers are looking forward to getting back on the court.

The NBA season has just ended recently, and all of the teams are getting warmed up and ready to start practicing. The Lakers took full advantage of the free agency window opening.

One thing that has occurred recently is that the Los Angeles Lakers got rid of some younger players to keep their seasoned vets on the court.

LeBron James and the Lakers went shopping and picked up eight free agents in two days.

Rob Pelinka is using the off-season not to bring in a lot of new talent but to bring in the older players. Kendrick Nunn and Malik Monk are the youngest players on the Lakers.

Eight Lakers players are younger than 32. With that being said, are the Lakers too old to win another title? Does age matter at this point?

The Los Angeles Lakers have such a strong team, and the players are not that old, and they are not out of shape. The NBA regular season should be very exciting, especially considering who is playing for the Lakers now.

Who is currently on the Lakers roster? 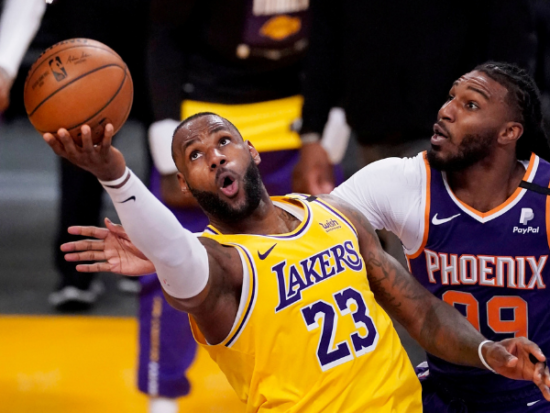 Six of the 12 current players on the Lakers’ roster are 35 or over. This Lakers team is the oldest in the NBA.

This team has been flourished with the elderly jokes and ridicule. Some fans are questioning the thinking of the team.

The older players, if healthy, can play just as well as the younger ones to LeBron and the Lakers.

Last year, the Lakers were a good defensive team. Being in the top five for two years, they have to get a new game plan together and make sure that these players are all on the same page.

The Lakers did sign three younger players last season. The three of them are in their 20s.

Carmelo Anthony has been in the NBA for 18 seasons, and he is still healthy and playing well, and now the Lakers have him.

Carmelo’s defense has lacked as he has gotten older, however. He was at Portland and scoring 40.9% beyond the arc. He is a veteran and a great shooter for this team.

Anthony Davis is a great defensive player and helps the Lakers fill the gap. He has been riddled with injuries, however, so that will be a challenge as well.

Dwight Howard is there when Davis cannot play, which may hold up well for the season. If the team stays injury-free and healthy, the older players may have a chance to prove themselves to fans and all of the critics.

Who are the oldest players on the Lakers team?

The @Lakers are loaded, but they’re also old as hell:

The Los Angeles Lakers roster has a few players that are over 32. Carmelo Anthony is the oldest player on the team. At 37, he is still going. LeBron James, Marc Gasol, and Dwight Howard are the next to oldest.

LeBron James is for anyone who wants to prove something to others. We all are aware of his person and the incredible basketball feats that he has achieved.

At 36, James is still one of the most talented and elite basketball players. Even though he is 36, that does not mean he is limited to what he can do.

The only thing that could cause problems with LeBron is if he were to become injured during the season. When you reach a certain age, the body does not bounce back so quickly, no matter who you are.

Dwight Howard was drafted one year after LeBron, but this backup center is one of the best in the league today.

Howard has to focus on rim protection, rebounding, and scoring in the paint from lobs, dump-off passes, and offensive rebounds.

It all comes down to knowing what makes these player’s effects in the long run.

When they know what tools they have to be effective, they take those tools and use them to score points and win games together.

It simply does not completely boil down to age, but it seems the focus is simply that for this Lakers team.

In comparison to other teams in the league, the Lakers have quite an older team.

How many old players do the Lakers have compared to other teams?

LeBron calls out those doubting the Lakers 👀 pic.twitter.com/V83nXIdJIX

The Lakers have a roster that has an average age of 32. They are the oldest team in the league. Believe it or not, one of the oldest teams of all time.

Last season, there were six teams that average age 24. The Lakers would be ten years older than those six teams. The Lakers have eight players on their rosters that are 32 and older.

The NBA team rosters are the youngest team in Oklahoma City, where their average player age is 26.

The Lakers have an older roster, but it does not mean they will not win this upcoming season.

However, there has been a lot of flack on social media and Twitter about how old the team is. The Lakers are already getting old jokes and elderly memes coming their way too.

What Exactly is Lebron James Salary?

To sum it all up, the NBA season’s free agency started with some interesting picks by the Lakers. Their roster has eight players who are 32 and older.

Many fans and critics question this move by Rob Pelinka. However, there is a reason behind these choices.

The Lakers may have an older roster, but that does not mean they cannot play and win games. This move by Pelinka may have NBA championship written all over it.