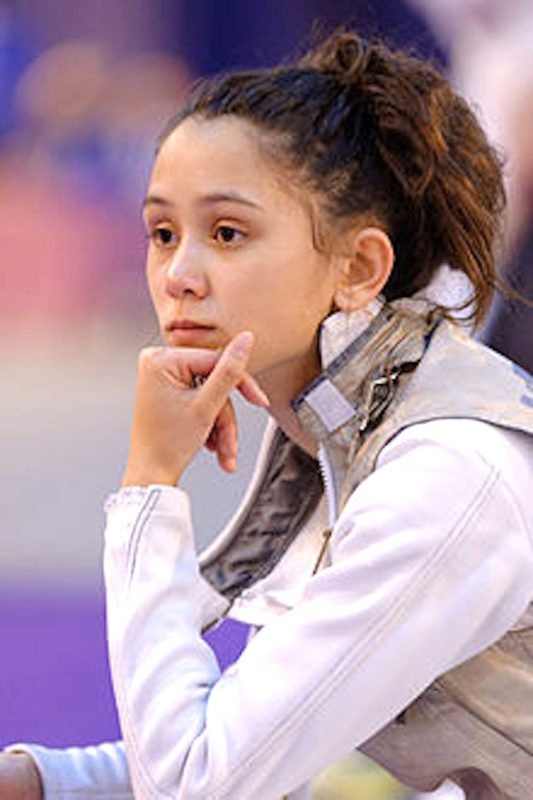 An Asian American Filipina, Lee Kiefer, from Lexington, Kentucky made history at the Olympics.

You couldn’t tell at first because she wore a mask—a fencer’s mask—with the American flag on the grill.

But when she took it off, you could see her big  smile when she won the Gold–one of the first Gold medals in Tokyo– in a sport with a lot more tradition than beach volleyball.  Kiefer won in fencing. The Three Musketeers type. Not the Home Depot type.

Kiefer is the first U.S. man or woman to ever win an Olympic gold medal in the individual foil. The first. No one has ever done that. That’s like fencing on Mars. Let’s see Jeff Bezos do that.

Yes, it’s our team—one big American team in all these sports from women’s soccer to the hammer throw—but we don’t really know who to root for until it comes up in the headlines.  And with all the new sports like skateboarding being foisted on us, well I just didn’t know where I had a rooting interest exactly.

I even know a little about fencing. When my high school football coach wouldn’t play me for not cutting my hair, I joined the fencing team as a swashbuckling youth. I know the difference between a riposte and a parry. En garde!

She now joins her husband, San Francisco’s Gerek Lin Meinhardt, another Asian American, who won a team Bronze medal in the 2016 Olympics with the U.S. men’s fencing team. He’s on this year’s team and has a shot to win another.

All Asian Americans now have a rooting interest. For the sake of the Meinhardt-Kiefer marriage.

But the world is still sick

It’s bad enough that I don’t care for how the competition is sliced and diced for human consumption by NBC and all its channels. The games are best live, but with time zone issues, they are more than likely recorded and delayed, all packaged for the Olympic commercials, not the athletes. And certainly, not the audience.

Which is strange because the Olympics is still all about the money. TV ad money.  And that’s about delivering ads (not games) to a primetime audience.  And maybe that’s why beach volleyball is in primetime. And fencers who look like Daft Punk meets the Power Rangers are hard to find anywhere. Unless it’s taped and packaged into bite sized chunks. The Processed Olympics.

So as much as I like Keifer and Meinhardt, the Asian American fencing power couple may not be enough to change my mind about how I really feel.

Here’s my Olympic spirit: The world is historically sick. More than 4 million people world-wide are dead from the virus. Fans can’t even attend. The venues are essentially TV studios.

Do we really need the games this way to improve the world’s spirits? At the last report I saw nearly 150 people connected to the games have tested positive.  Just cancel the games again when the time is right, right?

The Olympic spirit should be about world leadership in crisis. It supposed to be a way to showcase nationalism as a unifier.

Instead it presses on like an athlete against the clock going for a personal best.

Why doesn’t any country or any world leader value a Gold medal in Public Health?

Your Covid thoughts? Over the weekend, I joined Kristina Wong to take part in a small  group zoom “salon” on the topic with Asian Americans  from coast-to-coast.

Kristina, who will premiere a new show off-Broadway in November at the New York Theater Workshop, talked about her work getting masks to people. She’s both leading a group of “aunties” sewing masks, as well as buying masks and distributing them to all in need. Most recently that was farm workers and homeless people.

“I learned that I had this weird martyr side that comes out,” she said, as she discovered her way of dealing with the pandemic was to help others who couldn’t help themselves. Like getting unhoused people a washing station. Or getting quarters for laundry.  All good deeds.  some off set by donations, but it’s still frustrating.  “The thing is you’re literally doing the governments job,” she said. Wong is actually an elected local district grass-roots representative in Los Angeles, which turns out is unrelated to what she does as a real humanitarian. It’s the life of a comedian/actress/writer who wants to make a difference.

But it was more interesting hearing from the dozen or so folks who assembled.

Serena Lee said she’s spending more time at home with her grandkids, but she’s still upset about all the violence toward Asians due to the pandemic scapegoating of Donald Trump.

“I don’t feel safe to go out,” she said. “And it’s not about Covid now. It’s about being attacked.”

James Cerenio said the current attacks on women and seniors reminds him of how his father from the Philippines, who came to the U.S. in 1927, was attacked in the late 1990s. “This is not new,” he said emotionally wondering why more hasn’t been done to reverse the fear.  “When is our community going to get that respect from the politicians and the media, because (the hate) has always been here.”

The fear and anxiety takes a toll on a subject few AAPI like to talk about: mental health.

Lynette Pang spent 17 years in community mental health and is currently a psychotherapist in Seattle.  She warned of a real mental health crisis in the broad AAPI community. “I can’t serve everyone that wants to reach out to work with me and it’s heartbreaking because by the time they reach out, they needed the help yesterday,” Pang said. “There is just not enough of us…it’s overwhelming for a lot of us…we’re all burning out.”

June Jee of New York talked about the need for more affordable mental health care, among providers who can do it in-language. “Mental health is another pandemic in itself,” Jee said.

Tamiko Wong and Tonia Chen are trying to build a conversation network that could empower AAPI around the country. “If people have these conversations, they may feel more empowered to actually do something,” said Wong said.

Especially when they find others who feel the same way about a variety of issues.

These are real conversations. Let’s start having more of them. Maybe join in yourself.

I’ll talk more about it on my Facebook Watch show and on www.amok.com. Let’s connect.

Emil Guillermo is a journalist and commentator. He writes a column for the North American Bureau. Twitter @emilamok  Watch is vlog on www.amok.com