US will not lift travel restrictions, citing Delta variant concerns

US will not lift travel restrictions, citing Delta variant concerns

The United States will not lift any existing travel restrictions “at this point” due to concerns over the highly transmissible COVID-19 Delta variant and the rising number of U.S. coronavirus cases, a White House official told Reuters.

The decision, which comes after a senior level White House meeting late Friday, means the long-running travel restrictions that have barred much of the world’s population from the United States since 2020 will not be lifted in the short term.

“Driven by the Delta variant, cases are rising here at home, particularly among those who are unvaccinated and appear likely continue to increase in the weeks ahead.”

The announcement almost certainly dooms any bid by U.S. airlines and the U.S. tourism industry to salvage summer travel by Europeans and others covered by the restrictions. Airlines have heavily lobbied the White House for months to lift the restrictions.

The United States currently bars most non-U.S. citizens who within the last 14 days have been in the United Kingdom, the 26 Schengen nations in Europe without border controls, Ireland, China, India, South Africa, Iran and Brazil. 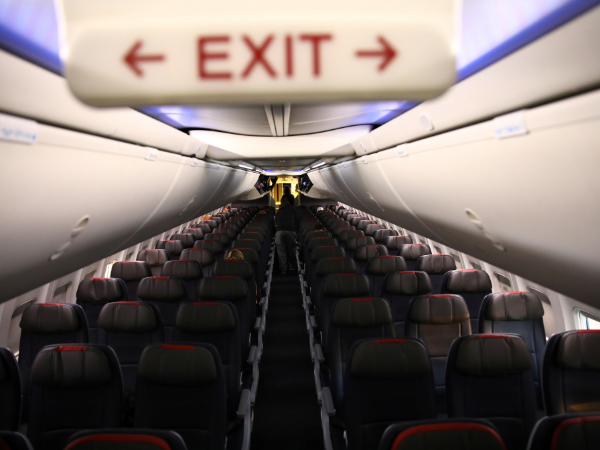 Rows of empty seats of an American Airline flight are seen, as coronavirus disease (COVID-19) disruption continues across the global industry, during a flight between Washington D.C. and Miami, in Washington, U.S., March 18, 2020. REUTERS/Carlos Barria

The extraordinary U.S. travel restrictions were first imposed on China in January 2020 to address the spread of COVID-19 and other countries have been added since then — most recently India in early May.

Last week, the U.S. Homeland Security Department said U.S. land borders with Canada and Mexico will remain closed to non-essential travel until at least Aug. 21 even as Canada said it would begin allowing in fully vaccinated American tourists starting Aug. 9.

Asked on July 15 at a joint appearance with German Chancellor Angela Merkel about when the United States would lift European travel restrictions, Biden said he would “be able to answer that question to you within the next several days — what is likely to happen.”

Merkel said any decision to lift restrictions “has to be a sustainable decision. It is certainly not sensible to have to take it back after only a few days.”

Since that press conference, U.S. cases have jumped.

U.S. Centers for Disease Control and Prevention (CDC) director Rochelle Walensky said Thursday the seven-day average of new cases in the United States was up 53% over the previous week. The Delta variant, which was first found in India, now comprises more than 80% of new cases nationwide and has been detected in more than 90 countries.

The White House official also cited the fact that last week, the CDC urged Americans to avoid travel to the United Kingdom, given a jump in cases.

The restrictions have brought heavy criticism from people prevented from seeing loved ones.

White House spokeswoman Jen Psaki on Friday said international travel is “something we would all like to see — not just for tourism, but for families to be reunited.”

But Psaki added “we rely on public health and medical advice on when we’re going to determine changes to be made.”

The Biden administration has refused to offer any metrics that would trigger when it will unwind restrictions and has not disclosed if it will remove restrictions on individual countries or focus on enhancing individual traveler scrutiny.

Reuters reported last week the White House was discussing the potential of mandating COVID-19 vaccines for international visitors, but no decisions have been made, the sources said.

The Biden administration has also been talking to U.S. airlines in recent weeks about establishing international contact tracing for passengers before lifting travel restrictions.

The White House in early June launched interagency working groups with the European Union, Britain, Canada and Mexico to look at how eventually to lift travel and border restrictions.