9 Best episodes of 'The Office' | Ranked and Reviewed

Best episodes of ‘The Office’

A big fan of some of the best episodes of The Office? You’re not the only one. At its best, the multi-awarded sitcom is a sometimes-exaggerate-but-still-very-much-plausible story of professionals working in, you guessed it, an office. Its documentary style of directing is what sets it apart from other sitcoms of the same genre. The series follows the fictional regional branch of Dunder Mifflin Paper Company in Scranton, Pennsylvania, and its employees.

At first glance, the premise of the story doesn’t seem much. Who wants to see a comedy set in one of the most mundane places on the planet? But The Office is much more than just a situational comedy with bosses, employers, and work drama. It has excellently crafted and developed characters, a powerhouse cast, and sometimes so hyperreal that it hurts to watch. Its refusal to deviate from awkward, uncomfortable situations and instead deals with it through humor is what makes it near and dear to millions of fans worldwide.

The Office as an award-winning sitcom 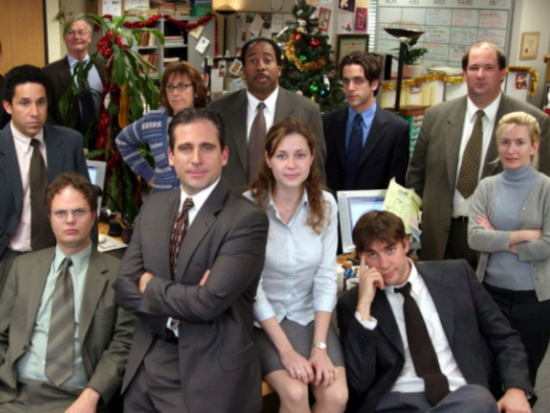 Borrowed from its U.K. counterpart, The Office premiered its first episode in 2005. No one could have predicted it would become one of the most iconic sitcoms for the next eight years of its run. Although the show ended in 2013, it is still very popular among viewers today. Thousands of memes and gifs are still circulating the internet, including Steve Carell’s infamous “It’s happening. Everybody stay calm. Everybody stay calm! Stay f*cking calm!”

Since its TV premiere, the show has garnered dozens of awards, including some from the Golden Globes, Emmy Awards, Writers Guild of America Awards, NAACP, TCA, and People’s Choice Awards. From Best Television Series to Outstanding Comedy Series to Choice TV Actor to Producer of the Year, The Office has been awarded it all. Little to no wonder as the series ran for eight full years, one of the longest-running sitcoms of the 2000s.

Best episodes of The Office 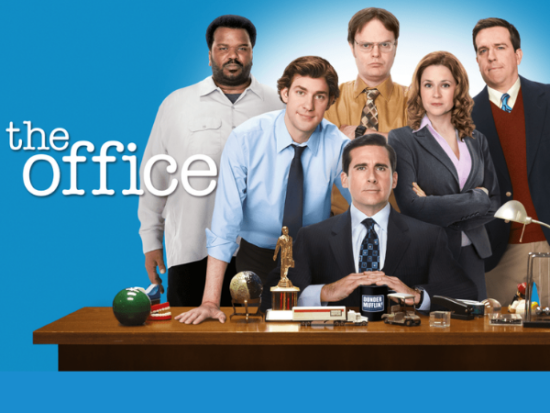 The premise of The Office centers on a documentary crew that decides to follow the employees of a paper company for reasons unknown. We have awkward salesman Jim Halpert (John Krasinski), who eventually develops feelings for Pam (Jenna Fischer), the already-engaged receptionist.

We have the iconic Michael Scott (Steve Carell), the Regional Manager who seems more befitting in a playground than behind a computer desk. Then HR representative Holly Flax (Amy Ryan) eventually becomes Michael’s wife.

Naturally, picking your favorites might be tough. Lucky for you, this list has narrowed down some of the best episodes of The Office, according to fans and critics alike. Note that these are in order of season of the episode and not necessarily their watchability ratings. 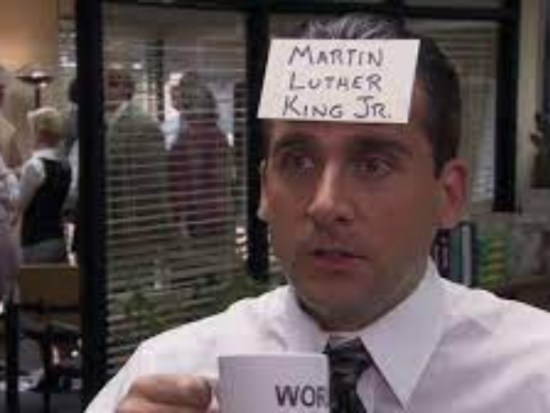 The second episode of The Office is essentially its premiere since its pilot episode is almost a complete remake of the original British show. Corporate sends down an HR representative to the office and gets a little into playing a Chris Rock impression. They all play an offensive guessing game with each employee with a note stuck to their forehead, and they have to guess the word. The episode ends with a hint at Pam and Jim’s future office romance.

An episode was written by actress, writer, and producer Mindy Kaling. This episode is nothing short of absurd. Cartoonish and over-the-top, this episode encapsulates what makes the entire show great. As the title suggests, this episode deals with a couple of mishaps from the main characters.

Michael burns his foot on a George Foreman grill, and Dwight crashes into a pole trying to save him. As awkwardly as ever, Jim spritzes a concussed Dwight while Michael puts his grilled foot inside a CAT scan. Chaos — and hilarious. 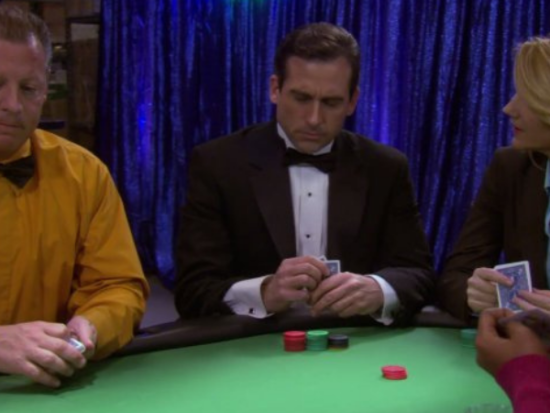 This season’s finale has been long-awaited by fans — Jim finally confesses his feelings to Pam face-to-face. After two long seasons of awkward flirting and inside jokes, secrets spilled in “Booze Cruise,” Jim and Pam finally confront their feelings in the parking lot outside of the company’s charity fundraising event. There’s also some action from the other casts—lots of gambling, date disasters, and perhaps a kiss or two.

Dunder Mifflin Paper Company’s employees need to undergo safety training. What could go wrong? Everything. Michael stages a suicide on the rooftop, and Dwight demonstrates what happens if he falls on the trampoline below using a watermelon.

Meanwhile, the rest of the gang is trying their best to comply with the training with little to no success. Who would take anything seriously if you had one over-the-top boss and his trusty buddy (Michael and Dwight) throwing watermelons off car roofs? 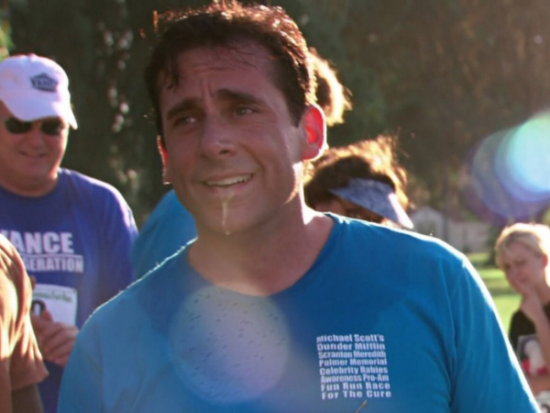 Ah, yes. The annual Fun Run that almost every company on the entire planet arranges for their unwilling employees. This season cold-open shows Michael running over Meredith with his car, not even half a minute into the episode. Running a few miles should be pretty easy to do if your goal isn’t to win but participate — wrong again. The office gang is faced with more dramatic problems. Michael ends up in the hospital from eating too many carbs. Andy runs 5K with chafed nipples, everyone’s vomiting, and sweating. It’s gross. And fun, so much fun.

This episode centers on Michael and Jan, the VP of Northeast Sales and Dunder Mifflin. Their dysfunctional dynamic is shown over dinner, a game of charades, and a tour of Jan’s candle business in her home. The gang has a blast but not without their typical squirm-inducing cringe moments, especially for Michael. 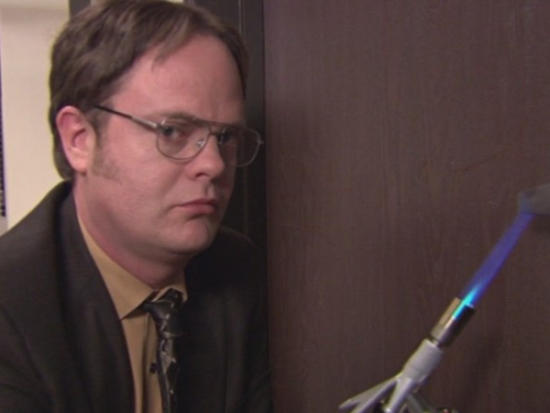 Dwight hatches an elaborate plan to test everyone’s safety training once again. This time, he wants to gauge the employees’ reaction to fire. So he starts a small one in the building, which ultimately gives Stanley a heart attack. So did everyone file out in an orderly manner?

Try again. Panicked, everyone goes into fight-or-flight mode. Michael throws a printer out of a window, Jim wants to get Pam out of the building, Angela throws her emergency cat into the ceiling, and Dwight cuts up the CPR dummy Hannibal Lecter style.

Five seasons ago, Michael’s masterpiece, a feature film ten years in the making, was introduced. “Threat Level Midnight” premieres during this episode, starring, of course, the employees at Dunder Mifflin. Breaking the fourth without breaking the fourth wall, actors pretend to become actors, and very badly. Dwight becomes a robot butler, Jim is Golden Face, and Michael cinematically and epically blows up Toby six times. 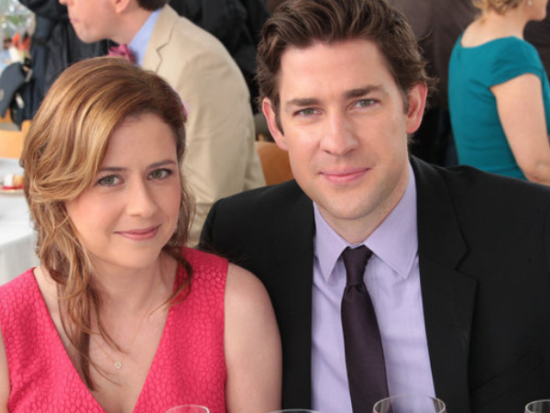 After nine seasons of laughter, cringe moments, forgettable jokes, and heartfelt moments, The Office finally comes to a close. The writers and executives wrapped up this long-running sitcom in the series’ final episode with full closure on each character that the audience has grown to love. Dwight and Angela finally get together. Jim and Pam get their HEA. Michael even makes a cameo after leaving the show two seasons ago. Not everyone gets a happy ending, but whatever they were dealt with befitting their characters, most of the audience would agree.

What is the least popular episode of The Office?

This may be a controversial topic among avid fans, but many seem to dislike Season 6, Episode 12: Scott’s Tots. Michael promises a group of third-graders that he would fully pay their college tuition. Now graduating seniors in high school, the students come to collect. But Michael never intended to keep his promise after all.

Many fans argue that this is possibly one of the worst things a character, even a fictional one, can do. The episode also drags out, and the other characters have little to no screen time. If you have also noticed, there is no episode from the 8th season listed in the best episodes of The Office. This is mostly because fans and critics agree that season 8 fell flat after Carell left the show for good.

Are ratings the basis for ranking episodes? 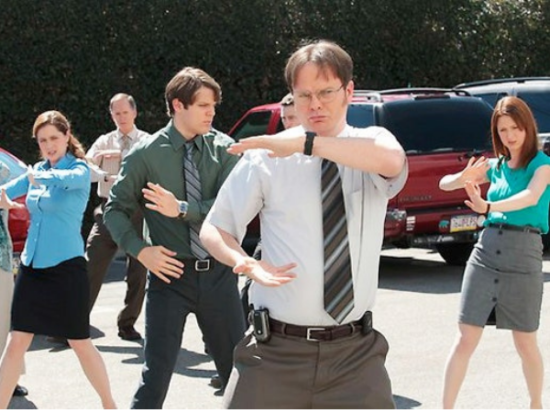 To put it plainly, episode rankings are personal reviews. Unless an article or review explicitly states that the best episodes of The Office are based on ratings, these reviews are often based on the viewers’ perception, thoughts, and general opinion on the episode. However, rating rankings also matter as it gives you an insight on which episodes were most-watched and which ones fell flat for the audience.

Depending on which ranking you’re looking at, ratings may vary. You can look at the initial ratings for when The Office was still an ongoing television show. You can also look at its rankings on streaming platforms like Netflix and Apple TV for comparison.

In any case, ratings can be one indication that an episode is good. That’s the general rule for TV shows, but it isn’t the only indicator.

What are some of the longest-running TV shows?

Whether you’re a casual fan or someone who’s been avidly watching the show since its premiere, the best episodes of The Office are the ones you enjoyed watching the most. It may have been the funniest episodes, or the ones with more touching moments, or maybe the most obscure and chaotic ones.

The Office was made for entertainment, and that’s what it should make you feel — entertained and perhaps a little enlightened with the power of humor.