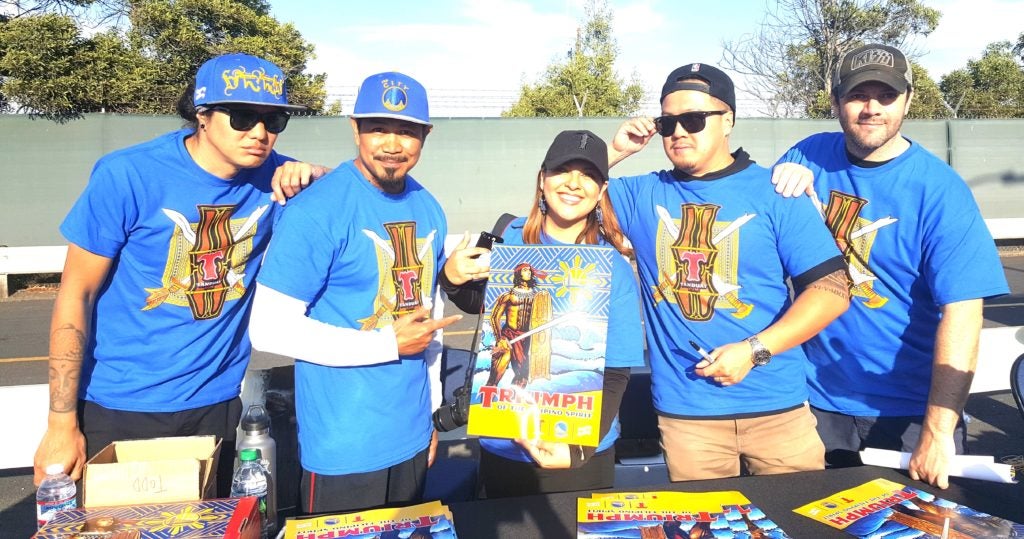 OAKLAND, California — Filipino Heritage Night with NBA champion Golden State Warriors was another big success as Bay Area Filipino hoops diehards showed up in big numbers like before to support their favorite team.

Despite a spirited late rally, however, the Warriors fell to the Detroit Pistons 115-107 in a close game in the Oracle Arena here.

Nevertheless, Filipinos would not be deprived of celebrating another heritage night as they whooped it up as early as tailgate in the Oracle Arena parking lot, once again celebrating heritage, culture and, this time around, Tanduay Rum.

Tanduay officially became a partner of the champion Golden State Warriors team, the first Philippine brand — “a world champion of rum” — to do so. Gisellle Tongi, communications director of Tanduay Rum USA, was visibly elated that “as a proud Filipino I am equally proud that Tanduay is a brand that wants to represent its people, the Filipinos, to the rest of the world.”

“I feel that if there is anything that Fil-Ams should be proud about, it is their heritage and their culture. And Tanduay has a history and a legacy dating back to 1854, a brand that our grandfathers, our ancestors grew up with,” Tongi explained.

Telan said he was glad that Tanduay, his former basketball team in the Philippines, has become partners with the Warriors for the Filipino Heritage Night

“This is my first time and I am very happy to be with fellow Filipinos watching the Warriors on Heritage Night. It always feels good to be playing with Filipinos here in the Oracle parking lot,” Telan said.

Long-time PBA barker Vince St. Price echoed Telan and Tongi as he described the Tanduay and Warriors partnership as “fantasti.”

“I feel good about it getting in touch with our Filipino Heritage here and doing this promo, they got these fantastic shirts done by local Bay Area artists. This is actually my first heritage night. Being here in person, it feels like I am reliving my PBA days,” a jubilant St. Price expressed. “So when you know that a Philippine-based company has just partnered with the Golden State Warriors here, that is indescribable. It really puts Filipino heritage at the very center of the stage.”

First Filipino NBA player Raymond Townsend said that, like a close-knit family, the Filipinos, whose favorite sports aside from boxing is basketball, is family to the Warriors.

“I love doing what I do promoting the kababayan heritage, promoting the NBA, I would like to do this as long as I can,” said Townsend.

Young girls and boys of the American Center of Philippine Arts are colorful in their costumes and graceful in their Filipino cultural dance during halftime of the Warriors-Pistons game. INQUIRER/Jun Nucum

At a pre-game press briefing, Filipina Warriors chief financial officer Jennifer Cabalquinto shared that she brought along her son, Jack, to the Filipino Heritage Night to make him experience being with his bigger family of Filipinos.

“I love Filipino Heritage Night, which is authentic and it really is reflective of this community in the Bay Area. It is organic here. It is good that my son is growing up thinking it is cool to be Filipino. When we were young growing up being the only Filipino family in Brooklyn I did not feel that Filipino pride,” an emotional Cabalquinto admitted.

Cabalquinto also mentioned that teamwork, trust and empathy are what the Filipinos and the Warriors share in terms of values, traits and principles.

“The Filipino community is really about family and I think the Warriors embody that.” During the half-time break, a Filipino cultural dance was again provided by American Center of Philippine Arts (ACPA), an organization of active 5–to-17-year-old girls and boys from Oakland, Berkeley and Brentwood.

Herna Cruz-Louie, executive director who co-founded ACPA with artistic and dance director Sidney Loyola, said it was their fifth year performing at the halftime show. “Every October, we are asked us to come and bring the kids to perform and represent Philippine heritage. It feels so good to be invited to perform. We will be there again if we get invited back,” Cruz-Louie assured.

The Bantay Bata Voices, a church-based children’s choir, sang the national anthem. The group has performed in many benefit concerts for organizations that rescue and protect abandoned and sick children on the Philippines.