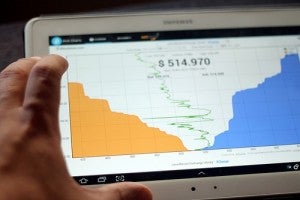 The developers of Bitcoin – the cryptocurrency that is rapidly increasing in prominence – are hoping that it can one day become the singular currency of the Internet. Certain events of 2016 have proved that the e-currency could also excel as a “safe haven” asset similar to gold and silver.

There is a strong chance that as Bitcoin becomes better known throughout the world, it could soon surpass these precious metals because of its numerous other uses.

When Britain famously voted to leave the EU this year, the pound plummeted to a 31-year low against top trading partners in the following months. Economists had predicted prior to the event that if the people of Britain were to vote for independence it would cause stock market instability. They were correct, and investment in British shares slowed down to half the pace they were the year before, as investors turned to other places to keep their money safe. These are called “safe haven” assets and are things like gold, silver and now, Bitcoin.

Donald Trump winning the US presidency was the second time in 2016 that investors turned to Bitcoin to protect themselves from unstable and volatile exchange rates. While the votes were being counted, the value of Bitcoin rose to $738, and then leveled out at $725 the next day.

As the USD fell by 12%, gold rose by 4% and Bitcoin by 3%. It seems that gold is still the safe haven asset of choice, but Bitcoin is close behind and has stronger scope for the future.

Uncertainty always pushes up the prices of safe haven assets as people rush to move their money elsewhere in an effort to protect their finances. Where virtual currencies were once viewed by some with scepticism, the tables have turned and it is now the Pound and the US Dollar that are plunging into unchartered territories.

With the value of Bitcoin on the up, some online businesses have already opted to switch to operating solely with the e-currency. Online casinos are one sector that have benefited from so many investors turning to Bitcoin in these times of economic crisis.

Bitcoin slots like Gangster Gamblers and Lucky Dragons are becoming increasingly popular, and could now be the go-to games for overseas players who don’t want to deal with fluctuating exchange rates at traditional online casinos.

Being able to actually use a safe haven asset is extremely advantageous. You can’t use silver to play at online casinos, just as you can’t normally walk into a shop and pay with a gold bar. You can play at Bitcoin casinos and pay for things online with the cryptocurrency, though, and you can also now stroll into certain pubs, cafés and restaurants and pay with your virtual Bitcoin wallet. This double function gives extra value to Bitcoin and is one of the main reasons that it could surpass gold and silver in the years to come.

The process of adding transactions to Bitcoin’s public ledger is referred to as mining, as is the process of extracting the precious metals from the Earth. This could be because the developers also believe that one day it will become the number-one commodity, ahead of gold and silver.